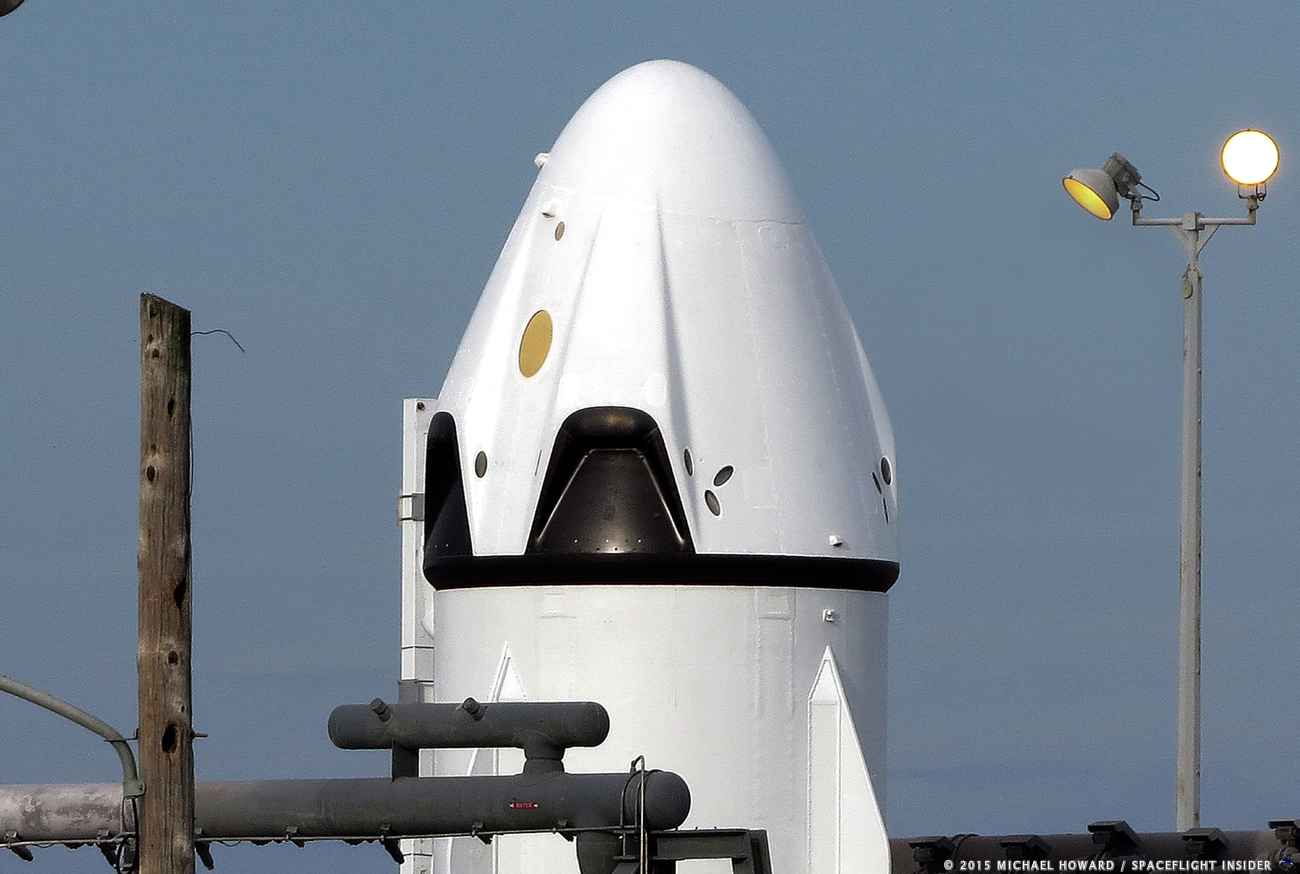 A file photo of the Crew Dragon test article used during the Pad Abort test in 2015. It is unclear what vehicle was used during the April 20, 2019, anomaly. Photo Credit: Mike Howard / SpaceFlight Insider

CAPE CANAVERAL, Fla. — A Crew Dragon test article has suffered a setback that could prevent SpaceX from sending people to the International Space Station before the end of the year.

First reported by Florida Today, around 3:30 p.m. EDT (19:30 GMT) April 20, 2019, a lot of orange and black smoke appeared over an area of Cape Canaveral Air Force Station, specifically around SpaceX’s Landing Zone 1. There are no reports of injuries.

“Earlier today, SpaceX conducted a series of engine tests on a Crew Dragon test vehicle on our test stand at Landing Zone 1 in Cape Canaveral, Florida,” a SpaceX spokesperson told SpaceFlight Insider in an emailed statement. “The initial tests completed successfully but the final test resulted in an anomaly on the test stand.”

It is unclear whether this was the same Crew Dragon capsule that was used for the Demo-1 mission more than a month ago. It was planned to use that same vehicle for an in-flight abort test no earlier than this summer. However, with the anomaly, it appears the schedule could be in doubt. This could likely further delaying the Commercial Crew Program, which has already seen Boeing postpone its first Starliner flights to at least the second half of 2019.

Before the incident, it was expected that, following a successful in-flight abort test, SpaceX would fly a crewed Demo-2 mission no earlier than late July.

“Ensuring that our systems meet rigorous safety standards and detecting anomalies like this prior to flight are the main reasons why we test,” SpaceX’s spokesperson said. “Our teams are investigating and working closely with our NASA partners.”

“The NASA and SpaceX teams are assessing the anomaly that occurred today during a part of the Dragon Super Draco Static Fire Test at SpaceX Landing Zone 1 in Florida. This is why we test. We will learn, make the necessary adjustments and safely move forward with our Commercial Crew Program.”

Utterly disastrous. And with Boeing also experiencing problems looks like NASA astronauts will be using Soyuz regularly till 2021.

Agreed, NASA will likely require a redesign, without SuperDracos in it. Which will take while to do unless they figure out what caused the tank (if that what it was) to leak in the first place.

I expect that if they figure out the root cause, that the production Capsule (if there another one in the loop) can be used instead with a fix. Maybe they will get the show on the road by 2020.

From the video leaked on twitter, the explosion was well before the superdracos were ignited. Until the root cause of that explosion can be determined it’s far too soon to assume what course of action to remediate is needed. This was the Crew Dragon used for the DM-1 mission they were testing – it could easily be down to salt water damage.

Question 1 : I couldn’t find any information about the status of the Super Draco escape system during the successful DM-1 flight. Did it fly in passive mode with dry fuel tanks (as per an incremental testing program) or otherwise?

Question 2 : Since the loss of CRS-7 due to a booster RUD in 2015, Dragon 1 space cargoes (not equipped with Super Dracos) are supposed to have a limited launch escape capability. Is that so?

No idea about question 1 but question 2 is yes – see… https://www.nasaspaceflight.com/2015/07/saving-spaceship-dragon-contingency-chute/