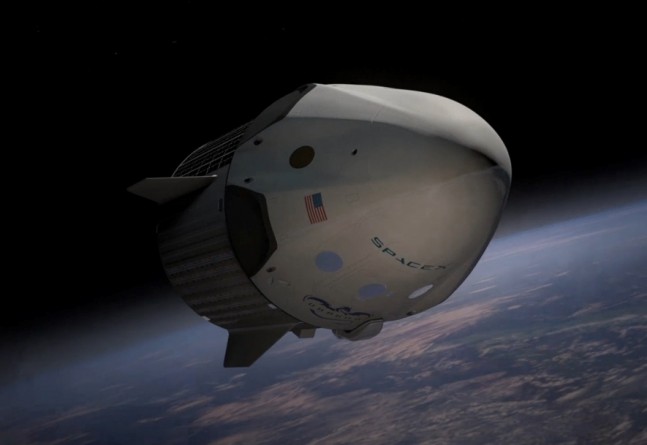 Space Exploration Technologies (SpaceX ) has completed the first milestone to have the Hawthorne, California-based company’s Falcon 9 v1.1 rocket and Dragon V2 spacecraft ferry crews to the International Space Station (ISS) under NASA’s Commercial Crew transportation Capability or “CCtCap.” The space agency announced that it had approved the completion of this milestone via a press release issued on Friday, Dec. 19. This recent development is just one of 23 milestones that NASA’s private partners have accomplished in the past year.

The particular milestone that was completed was the Certification Baseline Review. This provides a baseline review of how SpaceX plans to develop and produce the crewed variant of its highly-successful Dragon spacecraft as well as how it plans to crew-rate the Falcon 9 v1.1 booster and support facilities.

“This milestone sets the pace for the rigorous work ahead as SpaceX meets the certification requirements outlined in our contract,” said NASA’s Manager of its Commercial Crew Program Kathy Lueders. “It is very exciting to see SpaceX’s proposed path to certification, including a flight test phase and completion of the system development.”

Under the CBR, SpaceX was required to provide in detail, how it plans to launch crews, transport them to the orbiting laboratory – and then return those crews back to Earth. SpaceX’s Falcon 9 has had a highly-successful track record with no major failures in its 13 flights. Photo Credit: SpaceX

The NewSpace company, along with established aerospace giant Boeing, were announced as the “winners” to proceed forward under CCtCap during a press conference held on Sept. 16 at NASA’s Kennedy Space Center in Florida. NASA hopes that SpaceX’s Dragon and Boeing’s CST-100 will allow the station’s current crew compliment of six to increase.

According to the space agency, a crew-capable Dragon would have the capacity to remain on station for about 210 days. The spacecraft would also be able to serve as a kind of space-based “lifeboat” in the event of an emergency.

“SpaceX designed the Dragon spacecraft with the ultimate goal of transporting people to space,” said SpaceX’s President and Chief Operating Officer Gwynne Shotwell.  “Successful completion of the Certification Baseline Review represents a critical step in that effort—we applaud our team’s hard work to date and look forward to helping NASA return the transport of U.S. astronauts to American soil.”

If everything continues to go according to schedule, the next couple years could be pivotal for SpaceX. Both the F9 booster and Dragon spacecraft could be approved for crewed flight – and the United States would regain the ability to launch astronauts on its own. Since 2011, the nation has been dependent on Russia for transportation to the Space Station.

SpaceX is unique in that it is the only company under CCP that is providing both the spacecraft and launch vehicle to send crews to the ISS. Photo Credit: SpaceX

Both SpaceX and Boeing are required to complete NASA certification of their spacecraft. This includes carrying out one test flight with a NASA astronaut on board. The certification process is designed to validate the design of the spacecraft and the launch vehicle that will deliver it to space. Once the Dragon V2 is on orbit during this test flight – it will then need to show that it can maneuver and dock to the ISS.

SpaceX is expected to test both Dragon and the crew-rated variant of the Falcon 9 in the next couple years. According to a release issued by the space agency, SpaceX will then begin processing and integrating the Dragon V2 and F9 v1.1 at a new hangar located at KSC.

Under the prior phase of CCP, the Commercial Crew integrated Capability (CCiCap), SpaceX completed two milestones in 2014 –  the Dragon Primary Structure Qualification and the Delta Crew Vehicle Critical Design Review – these were completed last month (November). SpaceX also completed critical design reviews of the systems and operations that will allow the firm to carry astronauts.

This, however, was just the lead up to the Certification Baseline Review – which was conducted this month (December). If everything continues to proceed apace – SpaceX should conduct two abort tests for the Dragon V2 in 2015. These tests are required under CCiCap.

NASA is hopeful that by ceding delivery of both crew and cargo to the ISS – that it can focus on sending astronauts to deep space destinations which currently include an asteroid (currently slated to take place in 2024) and Mars (sometime in the 2030s). While Dream Chaser was not tapped to proceed under CCtCap – several organizations have shown interested in the vehicle. Image Credit: SNC

In 2014 Boeing, SpaceX, Sierra Nevada Corporation and Blue Origin completed some 23 milestones under NASA’s Commercial Crew Program. This has required these companies to carry out extensive reviews in the hope that they can handle the responsibility of sending crews to the sole destination in low-Earth orbit – the ISS.

“To say we’ve been busy would truly be an understatement,” Lueders said. “Our partners at Blue Origin, Boeing, Sierra Nevada Corporation and SpaceX have made tremendous strides in their respective systems throughout the year and we’re happy to have supported them along their way. My team and I are excited to continue to work with our partners in the coming year.”

“Our partners and providers are working on real hardware and will be doing exciting tests next year,” Lueders said. “Pad infrastructures, processing facilities, hardware and crew training mock-ups, which are all key elements crucial to flying crew safely in just a few years, will take a more cohesive shape next year.”

The other company that is working under CCtCap, Boeing closed out the Commercial Crew Integrated Capability (CCiCap) phase of Commercial Crew as well as the Certification Products Contract (CPC) that the aerospace firm has with the space agency. According to a release issued by NASA, Boeing has also completed the first two milestones under CCtCap as well.

In terms of Boeing’s offering under CCP, the CST-100, NASA has also worked with United Launch Alliance, as it is the Colorado-based company’s Atlas V booster that has been tapped to send the CST-100 off the pad and on its way to the ISS. What is not commonly known is that besides the spacecraft and launch vehicle – the ground support systems also have to be crew-rated as well. One of the milestones that was finished evaluated what has already been completed. NASA listed some of the aspects that were reviewed as follows: Launch complex, crew training, countdown operations mission control facilities, landing locations and post-landing operations.

Even though it lost out on advancing to the CCtCap phase of Commercial Crew, Sierra Nevada Corporation’s Dream Chaser space plane is still completing milestones under prior phases of CCP. The mini shuttle has had its Reaction Control System tested in a vacuum chamber, so as to better simulate how it would react in the actual space environment. Dream Chaser will use this system just as its larger ancestor, NASA’s retired fleet of shuttle orbiters did for 30 years – to maneuver on orbit. In 2015 SNC also carried out wind tunnel and risk-reduction testing under CCiCap as well closing out the Certification Products Contract with NASA.

Despite the fact that Dream Chaser was not selected, it is slated to carry out an additional free-flight test in 2015. The first of these, carried out in October of 2013, went almost flawlessly with the craft carrying out the full test. Upon touching down however, the test article’s landing gear failed and an accident occurred. The upcoming test is slated to take place at the newly-minted Armstrong Flight Research Center in California.

Blue Origin, founded by Amazon’s Jeff Bezos, is also participating under CCP. The company is working through an unfunded Space Agreement Act from the Commercial Crew Development Round 2 (CCDev2) phase of Commercial Crew. NASA has announced that this agreement has been extended through April of 2016. In 2015, Blue Origin is currently scheduled to carry out tests of the BE-3 engine as well as the Space Vehicle’s (the name for Blue Origin’s crew-rated spacecraft) propellant tank.

Even though neither Dream Chaser nor the Space Vehicle are contenders for CCP, these vehicles have already caught the eye of foreign space organizations such as the European Space Agency and the Japanese Aerospace Exploration Agency. SNC has also entered into an agreement with Stratolaunch. Having NASA test out and validate these vehicles provides extra confidence in their capabilities to potential customers. In fact, NASA has provided the firms under CCP with extensive support since the program was instituted in 2010.

NASA has sent astronauts to orbit since John Glenn’s historic flight aboard Friendship 7 in 1962, since that time the space agency has developed a diverse array of systems and technologies that are now being directed to enable both emerging and established aerospace firms to be able to accomplish what the space agency has done for more than half a century.