SpaceX completes 2nd mission of 2019 with launch of GTO rideshare 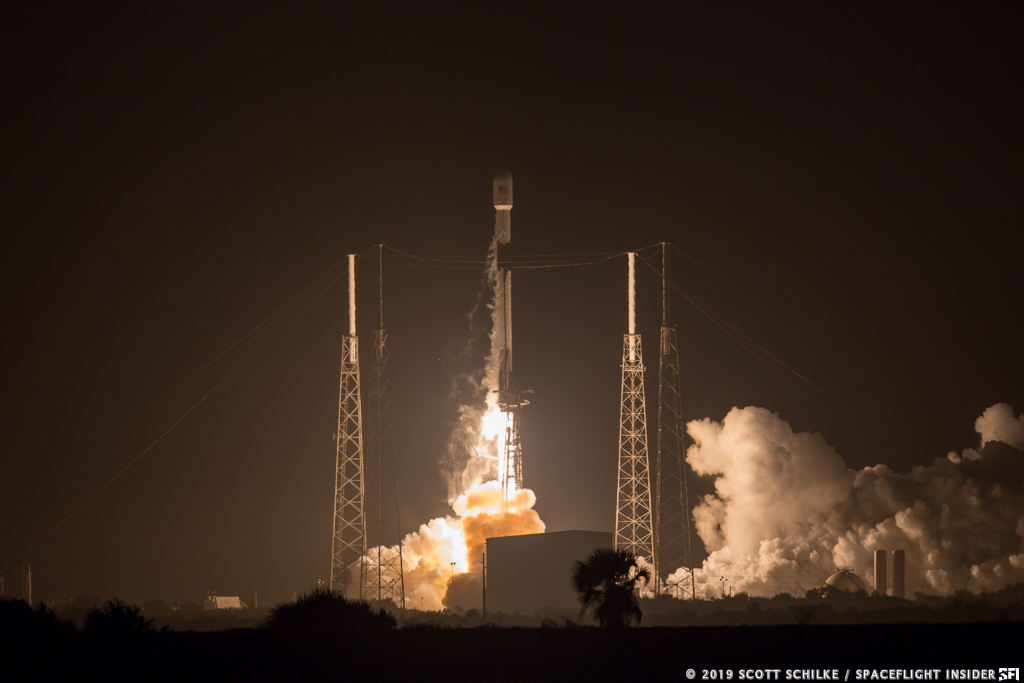 Also riding along in PSN 6 was the United States Air Force Research Lab’s (USAFRL) S5 spacecraft. Both S5 and Beresheet are flying via a rideshare arrangement with mission-management company Spaceflight. 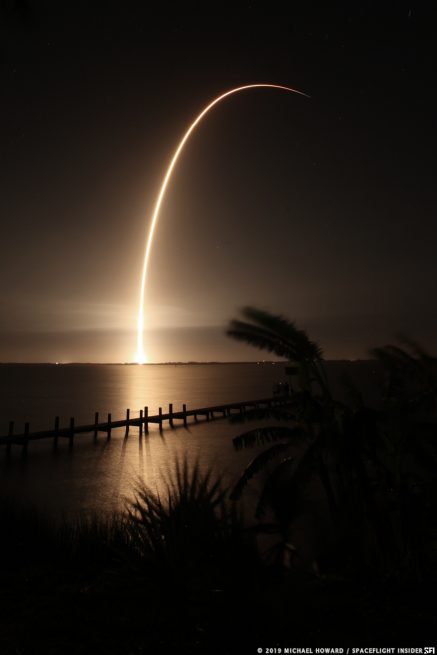 Approximately three seconds before liftoff, the vehicle’s nine Merlin 1D engines ignited with a telltale green flash. The engines, which burn a mixture of liquid oxygen and a highly refined kerosene called RP-1, produce a combined 1.71 million pounds (7,600 kilonewtons) of sea-level thrust. This provided enough power to propel the rocket and its trio of spacecraft off the pad, which cleared the tower shortly thereafter.

After gaining speed and altitude, the Falcon 9 began its gravity turn and assumed an easterly heading over the Atlantic Ocean.

As the vehicle accelerated, the forces experienced by the rocket—atmospheric pressure combined with velocity, a condition known as maximum aerodynamic pressure (max Q)—reached their greatest at approximately 77 seconds into the flight.

Staging, landing, and perhaps another first

The first stage’s nine Merlin 1D engines continued to power the vehicle for another 87 seconds, shutting down at about 2 minutes, 37 seconds after it had left the launch pad. This was followed 3 seconds later by separation of the first and second stages.

The first stage, now in a relatively ballistic trajectory, began orienting itself for its entry burn so that it could attempt a landing on one of SpaceX’s droneships.

Meanwhile, the second stage started its lone Merlin 1D Vacuum engine, continuing in its mission to deliver its three passengers to their intended orbits. The Merlin engine, capable of producing 210,000 pounds (934 kilonewtons) in its vacuum configuration, began to glow from the heat of combustion as the vehicle and payload continued to accelerate.

Once clear of the thick atmosphere, and no longer needing the thermal and acoustic protection provided by the payload fairing, the aerodynamic shell was was discarded. Normally, these fairings are left to fall to Earth, not to be recovered. However, SpaceX’s DNA is focused on reusing as much as the vehicle as possible, and their latest target is the reuse of the fairing.

Though the company had attempted previous recoveries with their West Coast launches, this mission marked the first time SpaceX deployed its fairing recovery ship, “Mr. Steven,” for an East Coast mission. It was not immediately clear if recovery for this mission was successful. 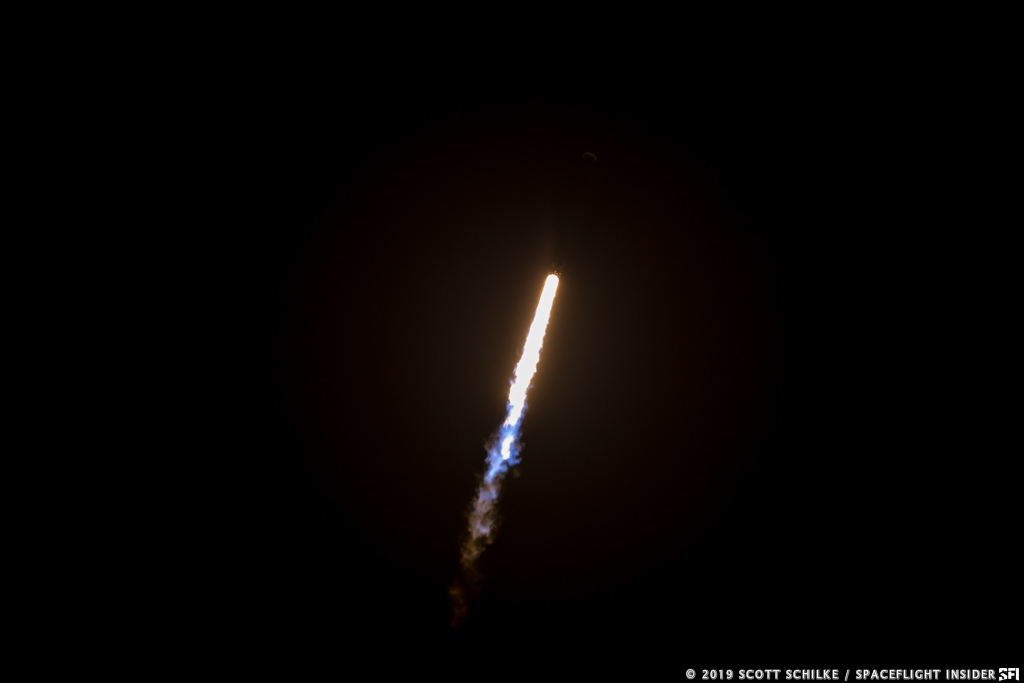 The Falcon 9 used for this mission waits on the launch pad for its evening liftoff. It was the third flight profile for this particular booster. The previous two mission occurred during the Iridium-7 and SAOCOM 1A mission in July and October of 2018. Photo Credit: Scott Schilke / SpaceFlight Insider

As the second stage and its passengers continued accelerating, the first stage initiated its entry burn. Meant to shed speed, and the accompanying stresses the booster would encounter as it plowed through the ever-thickening atmosphere, the engine firing started slowing the booster on its descent to the waiting droneship—“Of Course I Still Love You” (OCISLY)—in the Atlantic Ocean below.

The second stage, along with its passengers, reached their initial parking orbit with the cutoff of the stage’s engine just after 8 minutes of mission elapsed time. The vehicle then entered a nearly 19 minute coast phase. 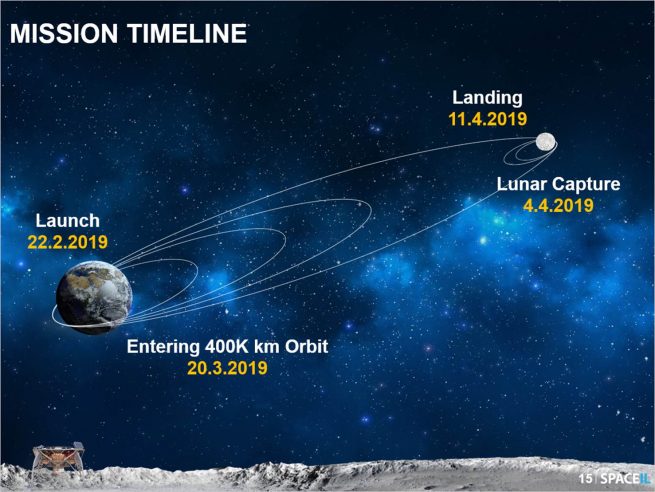 Though many spectators are primarily interested in the launch and landing of SpaceX’s hardware, the main mission is the delivery of customer payloads to orbit. Following a nominal coast, the Merlin 1D Vacuum engine reignited for its second burn, lasting just over a minute.

Following another short coast, it was time to deploy the first of the spacecraft.

Occupying the top spot on the payload stack, Beresheet was deployed nearly 34 minutes after leaving SLC-40. Following check-out procedures from ground personnel, and from the spacecraft itself, the lander will undertake a methodical, two month journey to the Moon.

In a statement, NASA administrator Jim Bridenstine congratulated the SpaceIL team for the successful launch of their spacecraft.

“As we better understand Israel’s capabilities and innovative work of their private industry, we know they’ll be an even stronger international partner in the future, one vital to the success of extending commercial space to the Moon and eventually on to Mars and beyond,” Bridenstine said.

NASA is looking to partner with commercial companies to send payloads to the surface of the moon ranging from small landers to, eventually, human-rated reusable landers. The U.S. space agency even has a contributing experiment aboard Beresheet: a small laser retroreflector installed aboard the lander to evaluate it as a navigation tool.

Still attached to the second stage were the PSN 6 and S5 spacecraft duo. In fact, the S5 was actually a passenger on the much larger PSN 6 telecommunications satellite. The pair were separated from the second stage nearly 45 minutes after launch, and will utilize PSN 6’s electric propulsion to raise the tandem’s orbit. Prior to reaching its final orbital position, PSN 6 will deploy the USAFRL’s S5 satellite to an independent orbit.

This drew SpaceX second mission of 2019 to a close. The company’s next launch is expected to be the first demo flight of the Crew Dragon spacecraft, designated SpX-DM1, set to launch no earlier than March 2.