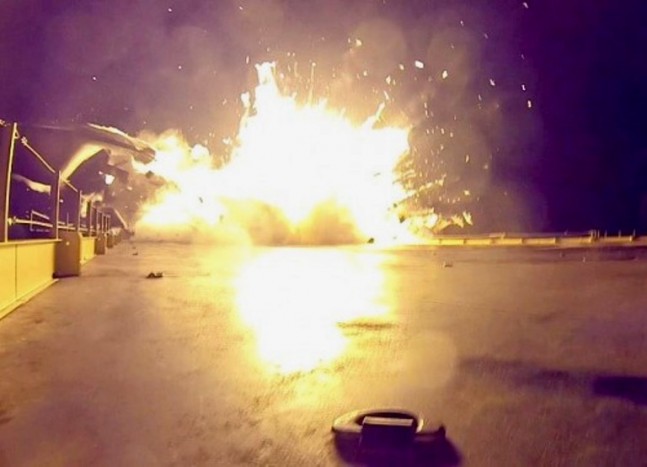 Space Exploration Technologies (SpaceX ) CEO and Founder Elon Musk shared photos of the Falcon 9 v1.1 first stage landing attempt with fans on Twitter. This particular attempt took place on Jan. 10, 2015, shortly after the booster’s stage had completed its part in lofting a Dragon spacecraft on its way to the International Space Station on the fifth operational flight under the $1.6 billion Commercial Resupply Services contract. It turns out that, contrary to prior statements, SpaceX managed to get both stills and video from the attempt.

Elon Musk released the following photos on Twitter, saying “Turns out we recovered some impact video footage from the drone ship. It’s kinda begging to be released.” Previously released images of the autonomous spaceport drone ship (ASDS), showed the ship sustained minor damage after the Falcon first stage made a hard landing on Jan. 10. SpaceX has a full launch calendar this year and plans to make many more landing attempts. Once successful, they will have achieved a major milestone on the path to rocket reusability.

Prior to the Jan. 10 landing attempt, the NewSpace company has made several attempts at oceanic soft landings. Once the company believes it has mastered an oceanic pad landing, the company plans to land on solid ground at Cape Canaveral Air Force Station’s Space Launch Complex 13 (SLC-13).

Stunning SpaceX video of landing on Vine – it can be viewed here: Hard Landing

FredFS456 on reddit made this gif of the photos http://i.imgur.com/QHgmaQI.gifv

I wish SpaceX all the luck and hope they are successful in this endeavor. But in reality, it will take many flawless landings on the barge and many years before NASA will allow a landing on Kennedy Space Center property.

Many years? I’d say the first landing at CCAFS LC-13 could happen within 12 months. Obviously it all depends on the how well the barge landings go.

I am a little puzzled by the failure mode. I would have though the hydraulic system would be closed loop. Does the system spew fluid for the entire descent?

It’s an open system, apparently it is a lot lighter to do it that way.

I heard it explained that a closed hydraulic system is significantly heavier than an open one. Plus Open systems self cool which might be a bigger deal

The hydraulic system is a closed, but one way system. The fluid (kerosene) is likely pressurized by helium and forced through the system creating the control characteristics. The hydraulic fluid is also the fuel they use and is drained into the main fuel tank which negates much of the mass penalty you would get from a standard closed loop hydraulic system. There still is the issue of weight which is why they had a conservative load out for the initial targeted landing. My guess is that wind and or other weather related issues caused the landing procedure to require more fluid than the system had and it stopped correcting the pitch and yaw too soon, hence the 45 degree angle we saw in the video.

Doodly: I have seen nothing authoritative about the hydraulic fluid being kerosene (RP1). Quite the opposite, Musk has repeatedly referred to it as hydraulic fluid. There would be no point in using the fuel. That RP1 tank is near the bottom of the rocket. you would need a couple hundred feet of plumbing and some hellacious pumps. Can’t use the engine turbo-pumps since they’re not running for most of the descent. There goes your weight savings. you may as well put in a closed loop system at that point. Even after landing the rocket still has a few hundred or thousands of gallons of fuel remaining. You simply do not run rocket engines and high speed turbopumps dry if you want to reuse them. Talk about RUD. Not a chance they would have run out of fluid especially since the engines are clearly firing as it trys to land.
Musk has said the tank will be 50% larger on the next flight. The most likely set-up is a tank near the fins pressurized with helium or nitrogen that vents into the atmosphere on descent.

It’s a pity that they did not utilize the engine’s turbo pump to power the hydraulics, but I suspect that the fins were active when the motor was off and the rocket was in free fall. Can anyone confirm?

Yes, your guess is correct. The fins were deployed before the atmospheric braking burn, and stayed open and working throughout the free-fall until the final landing burn.

Besides, that would still be a lot of plumbing to do, to force RP-1 up in a pipe all the way to the interstage where the fins are located.

Very good coverage of this incident. No wonder they did not want a post-launch press conference. This incident would have consumed all the media interest (mine included), detracting from the otherwise successful launch.

I disagree with the idea that it will be years before SpaceX is allowed to land back at the cape. They will just have to monitor the vehicle on descent and get ready to terminate it, just like they do during launch just in case the vehicle starts to go off course. I will be surprised if a landing at the cape doesn’t occur by early next year at the latest.

Jim,
Doing a near miss on such an experiment is a major success. You would think that NASA would want the public to learn how wisely our money is being spent. Here we have history being made with a booster coming out of space at hypersonic speeds and for the first ever finding its way with in a few feet of the center of a small craft and you suggest that it shouldn’t be talked about?? The “successful launch” is unimportant compared to this. This event compares to first the time the Wright Brothers went to Kittyhawk and did their gliding control experiments. On January 31, most likely will be the event that will herald in the age of affordable reusable space flight. I only hope that Elon Musk is kind enough to put a live camera on board this time to let us all witness this important moment in time!

Naw, Jim knows its a big deal 😉 he’s just saying it was smart of the company to not release the footage immediately…. I agree… Now that the relatively large media response, ala ‘spacex fails first ever landing attempt’, has now worn off, those who remain interested, aka enthusiasts, can relish on the video. 99% of people who don’t know the company though, probably shouldn’t have their first exposure accompanied by such memorable footage. I’m pretty sure they would have shown it live, or at least shortly after, if the rocket had landed cleanly… Can only be a matter of weeks or months now 😉