Archive photo of SpaceX Falcon 9 from the launch of the Iridium 8 mission. Photo Credit: SpaceX

CAPE CANAVERAL, Fla. — It can be said that SpaceX hasn’t had the best of luck when it comes to AMOS payloads. That unlucky streak was broken today with the launch of a Falcon 9 rocket and its passenger, the AMOS-17 spacecraft.

While it had been slated to launch at 6:53 p.m. EDT, predictions that weather conditions would be less-than favorable (predictions had weather providing only a 40 percent chance of acceptable conditions) for launch turned out to be accurate. Severe weather, including torrential rain and lightning striking dangerously close to the pad caused a new T-0 of 7:23 p.m. EDT (23:23 UTC) to be announced just before 5 p.m. 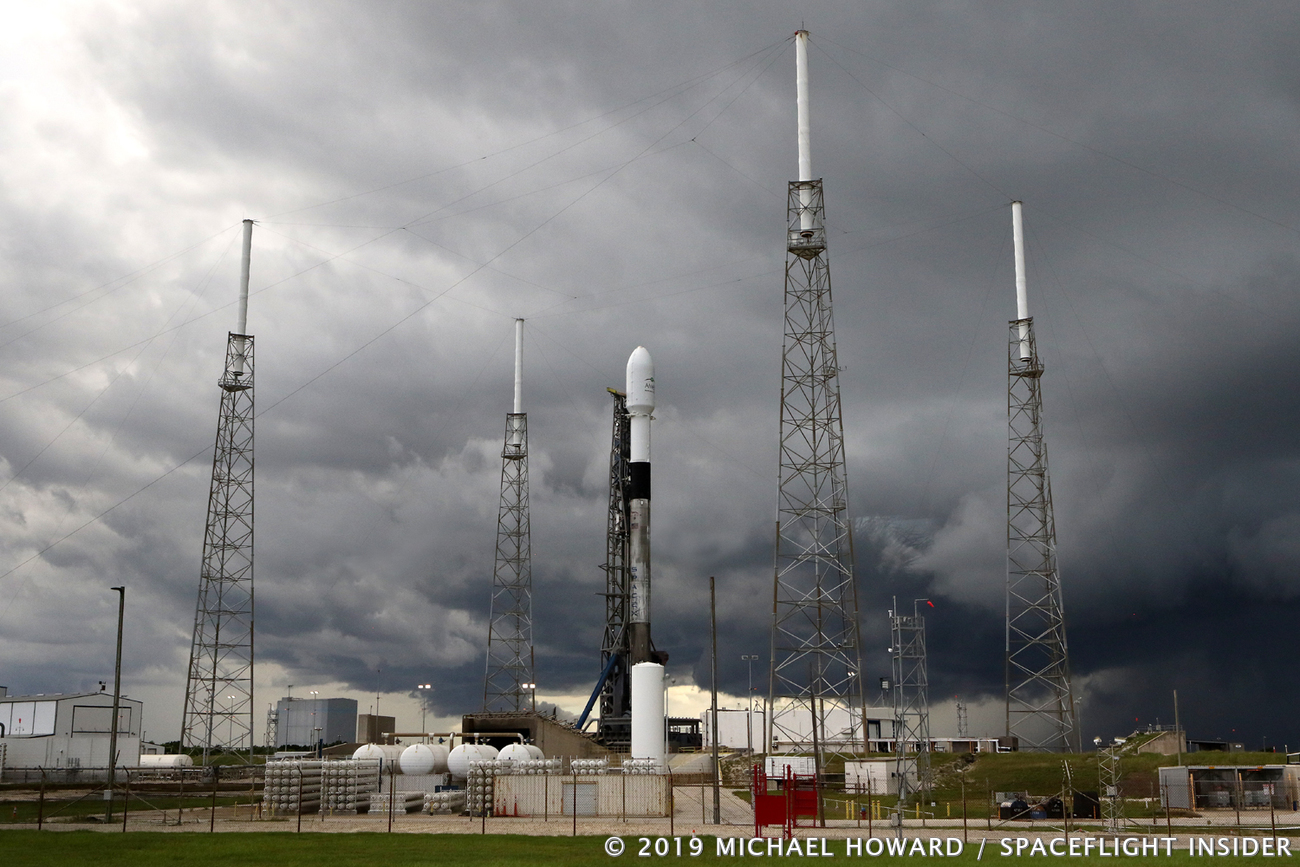 However, as the Sun began to peek out of the clouds, dipping closer to the horizon, the skies cleared enough to allow SpaceX’s Mission Control to send the rocket and its precious cargo on its way.

After lifting off into the evening sky, the first stage was jettisoned a little more than two minutes into flight. The second stage continued to push AMOS-17 “uphill” towards geostationary transfer orbit (GTO). Shortly thereafter, the payload fairing’s part of the mission was completed and it separated, exposing the spacecraft to the vacuum of space for the first time.

Unlike many of the missions that the Hawthorne, California-based company carries out these days, SpaceX did not attempt to recover the rocket’s first stage. It ended up in the Atlantic Ocean after it had fallen back to Earth. The reason for the difference in its flight profile is a rather basic one – fuel. In order to reduce the amount of onboard fuel the spacecraft needed for its mission, the Falcon 9’s first stage provided the extra “kick” needed to help the telecommunications satellite conserve its own fuel for use in its operational orbit.

After performing a standard two-burn mission profile, the AMOS-17 spacecraft separated from the second stage and began its journey to its operational geostationary orbit.

The AMOS-17 launch was conducted by SpaceX for free as a part of the compensation for the loss of the AMOS-6 satellite. On Sept. 1, 2016 another Falcon 9 rocket was preparing for a routine static fire before launch. However, during the fueling process, a composite overwrapped pressure vessel (COPV) failed. This caused the vehicle to explode which resulted in the loss of the launch vehicle itself, its AMOS-6 payload as well as causing extensive damage to the launch pad.

AMOS-17 was built by Boeing and Spacecom of Israel. The satellite will operate from the 17 degree East slot. If everything goes as planned, the satellite will provide communication services to parts of Africa, the Middle East, as well as Europe.

“AMOS-17 is packed with innovations so that it can support many challenging missions,” said Chris Johnson, president, Boeing Satellite Systems International, Inc. “We are proud to support Spacecom in their use of satellite technology to bring services, promote economic development and foster a greater sense of connection to people around the world.”

The Falcon 9 stands some 230 feet (70 meters) in height and has nine Merlin 1D engines in the first of its two stages. This evening’s flight was the third and last for this particular first stage. Prior to this evening’s launch, the stage was used on the Telstar-19 VANTAGE mission in July 2018 and the Es’hail-2 mission in November 2018.

Today’s flight, the tenth SpaceX has conducted so far this year, helped highlight SpaceX’s ability to successfully launch missions in very short order. The flight of the CRS-18 mission took place less than two weeks ago (July 25, 2019) and in the end bad weather, suspect equipment and a rapid launch manifest didn’t impact the mission.