Musk: Percentage on success of Falcon 9 first stage landing on ship – ‘made up’ 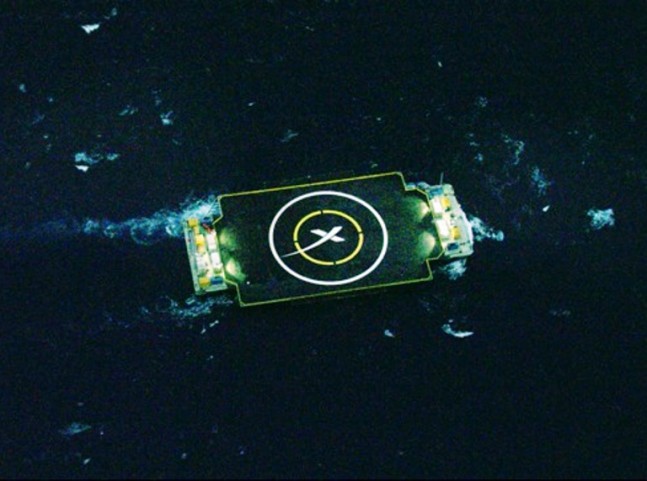 This latest launch delay provided SpaceFlight Insider with an opportunity to take a closer look at what many consider to be the most interesting aspect of the CRS-5 mission – a first-ever attempt by SpaceX to land a Falcon 9 first stage on a solid surface, enabling recovery and possible re-use. The Falcon 9 v1.1’s “fins” that will assist the rocket during its landing attempt – can be seen in this image taken on Jan. 6, 2015. Photo Credit: Jason Rhian / SpaceFlight Insider

Soon thereafter, Musk Tweeted a photo of the “barge” and described the vessel as an “autonomous spaceport drone ship [ASDS].”

Since that time, more details have become available.

On Jan. 5, at a Kennedy Space Center (KSC) press conference, Hans Koenigsmann, SpaceX’s Vice President of Mission Assurance, made clear that the intended landing platform is “not a barge . . . . a barge has no propulsion. This vehicle has thrusters.”

A prior article appearing on SpaceFlight Insider detailed a Houston, Texas-based company’s, involvement in the ASDS project and SpaceX’s use of it’s Portable Dynamic Positioning System (PDPS).

Koenigsmann declined to reveal the exact intended location of the ASDS during the CRS-5 landing attempt, but stated that it would be located a “couple of hundred miles out in the ocean,” and that the landing should take place approximately nine minutes after liftoff.

Koenigsmann went on to explain that he didn’t “expect waves, unless they’re really large, to have any effect” on the landing attempt.

Later in the day, on Jan. 5, Musk participated in a Reddit AMA in which he answered questions submitted, online, by the public.

In the AMA, Musk clarified that his prediction of a 50 percent probability of successful first stage landing was “pretty much made . . . . up” and that he really had “no idea.”

Musk went on to detail that Space X intended to “weld steel shoes over the landing feet [of the Falcon 9], as a precautionary measure,” to prevent the stage from falling over in the event of a successful landing.

Despite the questionable odds of success, SpaceX is not conducting the landing test without having tested the concepts behind it. Using the Falcon 9 reusable test article, the NewSpace company has successfully completed several flights and landings with the craft – with only one failure occurring on April 22, 2014.

Between the F9R flights and those carried out in MacGregor, Texas with the “Grasshopper” vertical takeoff / landing test craft – the company is, in essence, taking its efforts to the next stage. SpaceX has already demonstrated through both the F9R and Grasshopper that it can conduct pinpoint landings using a booster’s first stage.

When asked how he would celebrate if the CRS-5 landing attempt is successful, Musk responded with: “Party at Cocoa Beach!”

Stay tuned to SpaceFlight Insider for continuing coverage of SpaceX and its Jan. 10 launch and a landing attempt.

Great article! Can’t wait to see the 1st stage landing.
Thanks for this great news.

Anybody know if any other company has every tried something like this before? With the exception of glide landing like the shuttle of course.

Very cool and can’t wait to see the results, whatever they are. There’s gotta be a first time for everything.

McDonnell Douglas DC-X was a suborbital VTVL rocket in the 90’s. But not from space tho