SpaceX aiming for first polar launch from Florida in 60 years 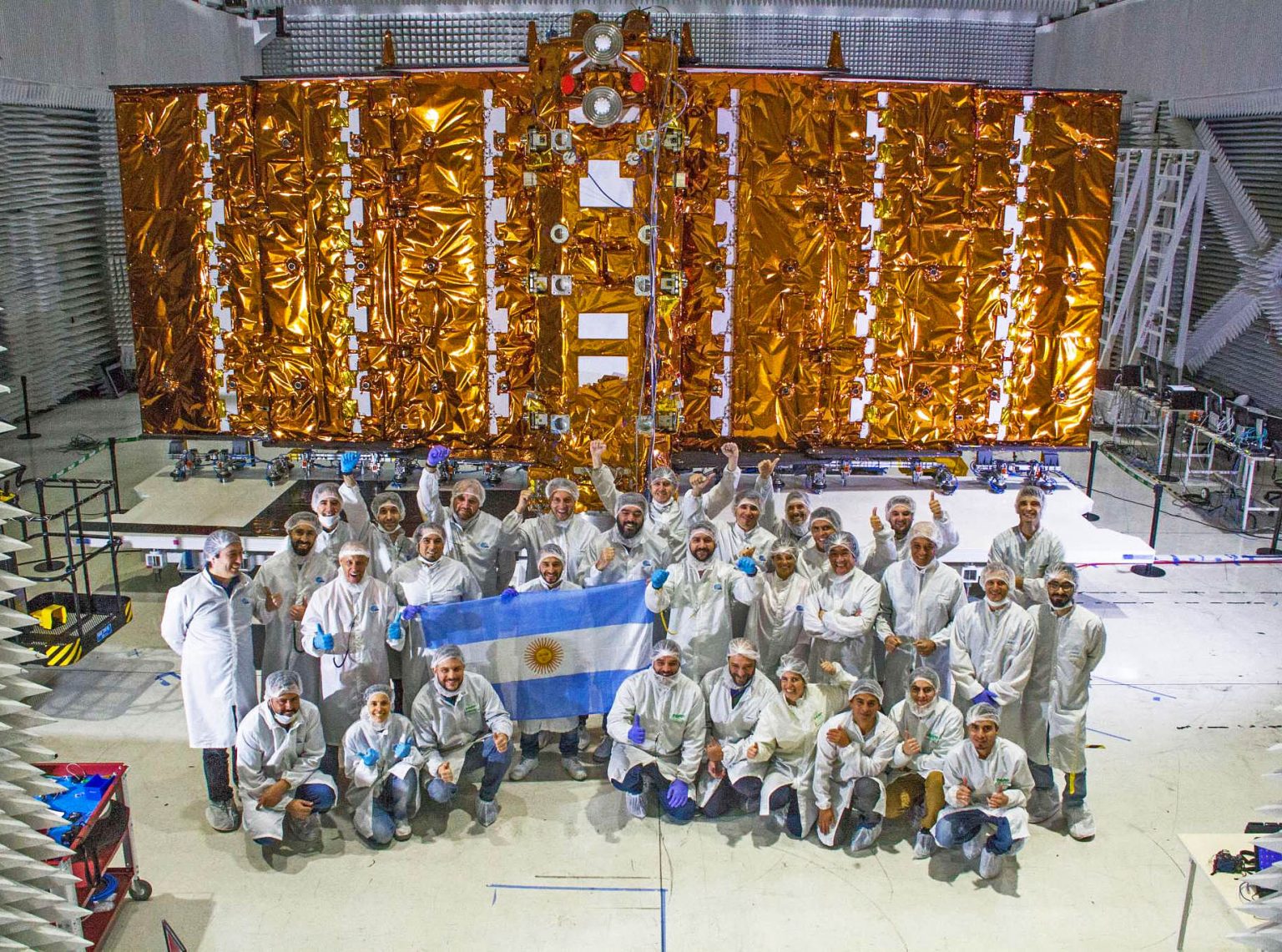 Team members pose with the SAOCOM 1B satellite. Image: CONAE

On August 30, SpaceX is planning to make another entry in the modern-day history books, flying a launch trajectory not seen from Florida’s Space Coast in over 60 years. The mission to launch the SAOCOM-1B payload into a sun-synchronous polar orbit is also part of a rare, two-launch day on the Eastern Range.

Set to fly atop a SpaceX Falcon 9 rocket, the SAOCOM 1B satellite is the second of its type for CONAE, Argentina’s space agency, SAOCOM 1 earth observation satellite system. The system is primarily tasked to aid in disaster management, such as volcanic eruptions and earthquakes, and will also help to monitor farmlands for agricultural and planning services. In addition to the SACOM 1B satellite, the rocket will also be lofting the GNOMES-1 small-sat, which aims to help provide radio data for weather forecasting and climate observation. 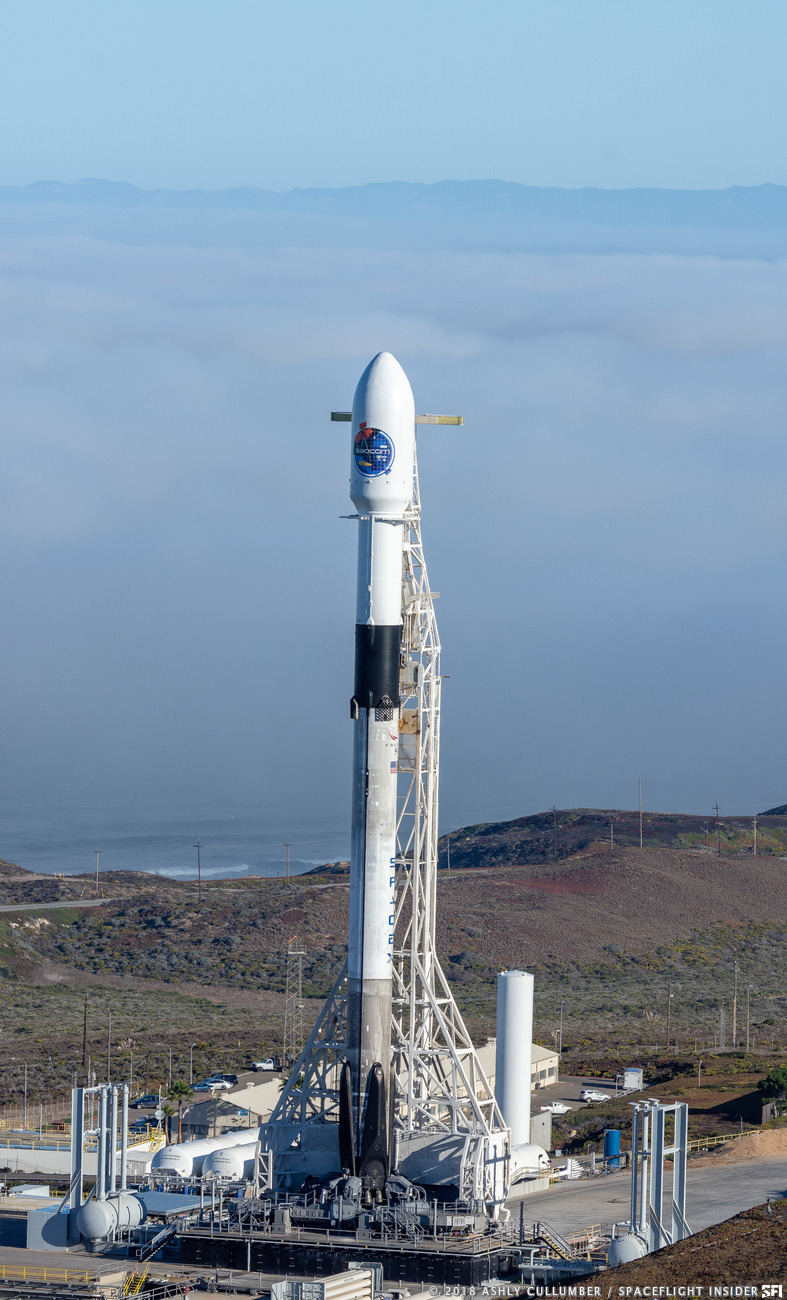 The Falcon 9 with the SAOCOM 1A satellite sits on the SLC-6 launch pad at Vandenberg Air Force Base prior to its launch on October 8, 2018. Image: Ashly Cullumber, Spaceflight Insider

SAOCOM’s orbital destination makes this launch very different from anything the Space Coast has seen since the 1960’s. The majority of launches from Cape Canaveral Air Force Station, and NASA’s Kennedy Space Center, enter what is known as a near-equatorial orbit, or an orbit that follows the earth’s equatorial plane to some degree. Equatorial launches make the Space Coast a prime spot for launching rockets, due to the proximity to the earth’s equator. As the earth rotates to the east, rockets launched from these sites towards the east can take advantage of an extra boost in natural speed as a result of the rotation, which is strongest closer to the equator. Other benefits include a location proximal to the Atlantic Ocean, which allows for rockets to overfly vast and unpopulated areas, with practically no danger of damage from falling debris.

Polar orbits are quite different from equatorial orbits, and usually require a change of location to allow rockets to safely launch toward the north or south. These types of orbits take a spacecraft to an orbit that passes nearly directly over the north and south poles, which historically was not able to be done safely from Florida’s Space Coast. For decades, these types of launches have been done from California’s Vandenberg Air Force Base, where rockets have a clear path over the ocean to launch towards the South Pole. This launch attempt will be the first polar orbital launch attempt from the Space Coast since a Thor Missile launch failed in 1960, raining debris down onto Cuban soil.

The Sunday evening launch is expected to take the Falcon 9 rocket on an unusual trajectory from Florida, as it will dog-leg to the east in order to avoid populations and skirt the southeast coast of Florida, before making its way over Cuba and into orbit.  According to SpaceX and the 45th Space Wing, due to the rockets flight path and altitude, there is no danger of falling debris over Cuba, in either nominal flight, or that of a launch failure like the previous attempt in 1960. It is because of this that the U.S. Space Force and the Eastern Range have allowed the launch corridor to return with the modern technologies in use today. 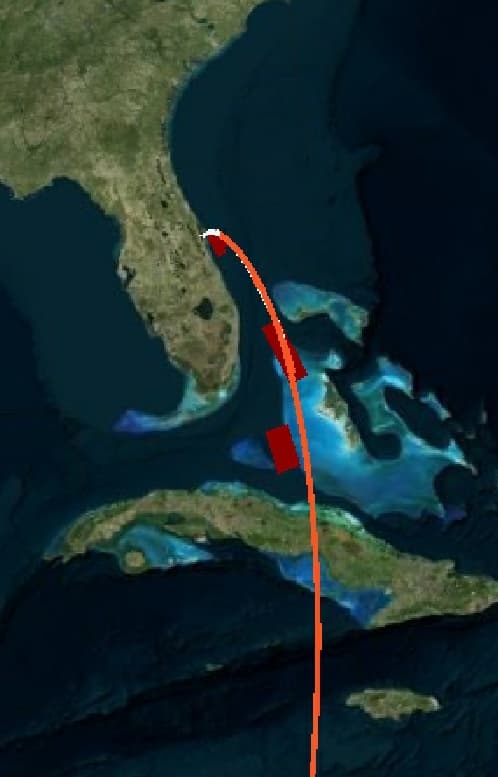 Once the first stage booster completes its lifting duties, the

booster will reorient itself on a trajectory aiming it to return to Cape Canaveral. The booster will then complete a series of three burns in order to bleed off the inertia gained from liftoff, sending the vehicle back toward launch site. Once the booster has reentered the earth’s upper atmosphere, the vehicle will use its grid fins to steer the booster towards its targeted landing site at the Cape Canaveral Air Force Station’s Landing Zone 1, where it will make a landing attempt for future re-use. The booster making this flight, B1059.4, has flown three times prior, on the CRS-19, CRS-20, and Starlink 8 missions, making this its fourth flight. The company’s twin recovery vessels “Go Ms. Chief” and “Go Ms. Tree” will also be attempting to catch the two fairing halves as they each parachute back to earth.

SpaceX has identified a 10 minute window for the launch, 7:14 to 7:24 p.m. EDT (2314 – 2324 UTC), with liftoff targeted to occur at 7:19 p.m., from Cape Canaveral Air Force Station’s Launch Complex 40. Launch viewers in south Florida will be treated to a rare sight, as the rocket traverses its flight path over the south coast, before making its way over Cuba. This launch forms a part of one of the busiest weeks of 2020 for the Space Coast, as part of three back-to-back launches planned over the span of 3 days, beginning with an early morning United Launch Alliance Delta IV Heavy flight scheduled for 2:04 a.m., August 29. The third mission preparing to fly, also by SpaceX, is the thirteenth Starlink mission. It is scheduled to fly from Launch Complex 39A on Sunday morning, at 10:12 a.m..