SpaceX’s launch of the first 60 of its Starlink satellites, designed to provide internet service to under served areas, is generating controversy about their potential impact on night sky observation and radio astronomy.

The first of what is to be a mega constellation of 12,000 Starlink satellites were visible as a train of bright lights passing overhead in the sky during the nights immediately following launch. While the view excited some observers, it generated concern over the satellites’ long-term impact on the night sky. 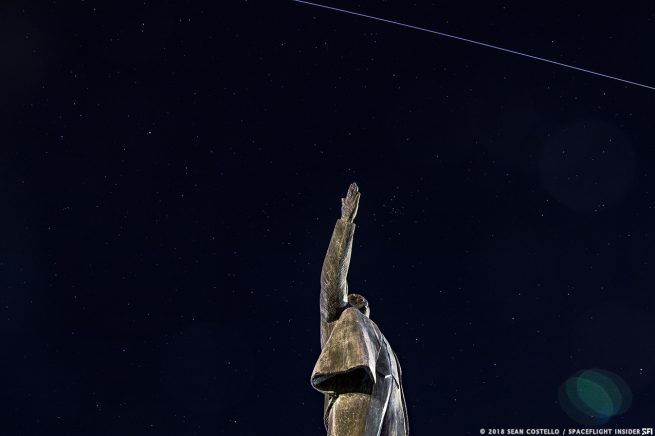 An image of the night sky as the International Space Station flies across the camera’s field of view. While expected to be much dimmer, Starlink satellites would create similar streaks in night sky photos around dawn and dusk. Photo Credit: Sean Costello / SpaceFlight Insider

Planetary astronomer Alex Parker of the Southwest Research Institute (SwRI) expressed concern that the 12,000 satellites could be brighter and more numerous than stars visible to the naked eye.

The International Dark Sky Association (IDA) pointed out that the satellites’ reflective solar panels and metal surfaces make them visible at night. They were observed worldwide in the nights following their launch.

“The rapid increase in the number of satellite groups poses an emerging threat to the natural nighttime environment and our heritage of dark skies, which the International Dark Sky Association (IDA) has worked to protect since 1988,” the organization said in a statement responding to the satellites’ launch. “We do not yet understand the impact of thousands of these visible satellites scattered across the night sky on nocturnal wildlife, human heritage, or our collective ability to study the cosmos.”

A summer astronomy project for Smith College undergraduates in New Hampshire was already impacted adversely when students looking through a telescope suddenly saw the bright satellites stream across the sky, the IDA statement notes.

SpaceX CEO Elon Musk said the satellites are being raised to a higher orbit, from 273 miles (440 kilometers) over Earth’s surface after launch to 342 miles (550 kilometers), where they are expected to be less visible.

“If we need to tweak sat orientation to minimize solar reflection during critical astronomical experiments, that’s easily done,” Musk said on Twitter. “There are already 4,900 satellites in orbit, which people notice ~0 percent of the time. Starlink won’t be seen by anyone unless looking very carefully and will have ~0 impact on advancements in astronomy.” 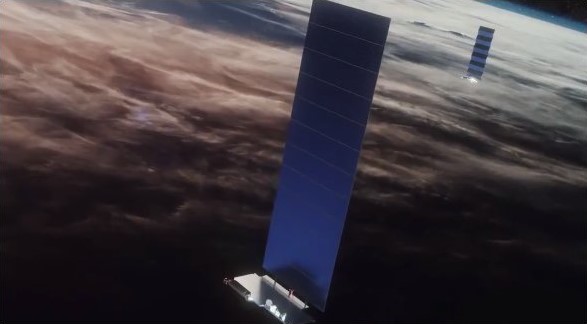 A rendering of a Starlink satellite in orbit. Image Credit: SpaceX

Claiming SpaceX is dedicated to science, Musk said he has instructed the company’s engineers to reduce future Starlink satellites’ reflectivity by making them less shiny.

“We’ll get a better sense of value of this when satellites have raised orbits, and arrays are tracking to the Sun,” Musk said on Twitter.

His initial claim that the satellites would not be visible at night when the stars are out was challenged by several astronomers. Cees Bassa of the Netherlands Institute for Radio Astronomy did his own calculations of the satellites’ visibility and determined they would be visible after sunset. Being above the Earth’s surface, they would continue to be illuminated by sunlight after the Sun sets on Earth.

“My aim was to show people these satellites were going to be more visible than people said they would — among them Elon Musk,” Bassa said. Between 70 and 100 satellites would be visible on summer nights once all 12,000 are launched, he said.

Even if the satellites are fainter than the brightest 500 stars in the sky, they would adversely affect astronomers in dark sky areas, where 1,000 to 2,000 stars are visible on a typical clear night, according to Darren Baskill of the University of Sussex. 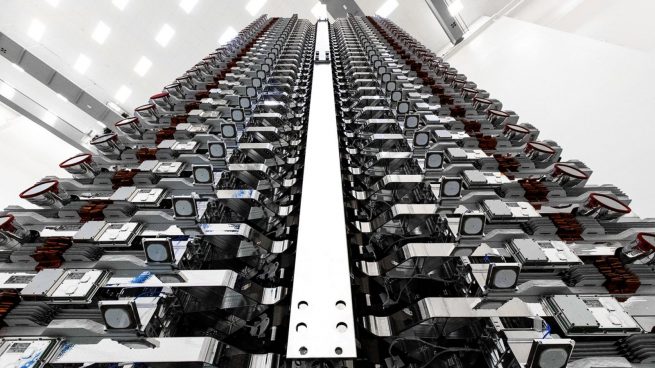 The 60 Starlink satellites in their launch configuration before being encapsulated in the Falcon 9’s payload fairing. Photo Credit: SpaceX

Astronomers already have to correct images impacted by passing satellites, said Nestor Espinoza of the Max Planck Institute for Astronomy in Heidelberg.

SpaceX is monitoring the progress of the 60 launched satellites, which have successfully deployed their solar panels, generated power, and communicated with mission controllers on Earth.

Using their onboard propulsion systems, the satellites are expected to take between three and four weeks to reach their designated orbit and are programmed to avoid one another and other objects in orbit.

According to a SpaceX statement released on May 31, “the observability of the Starlink satellites is dramatically reduced as they raise orbit to greater distance and orient themselves with the phased array antennas toward Earth and their solar arrays behind the body of the satellite.”

A total of nine companies plan on launching satellites for the purpose of providing broadband internet service to underserved parts of the world. OneWeb is working on a network of 648 satellites, six of which have already launched. Telesat aims to launch 292, and Amazon is planning a constellation of 3,236.

The internet providers are worried so sell this bs..

Musk said on Twitter. “There are already 4,900 satellites in orbit, which people notice ~0 percent of the time…”

Not true. Ask any stargazer. Even at current levels most skywatchers see satellites almost continuously. Even through my telescope, a rather large “lens” with a small field of view, it is routine to have satellites shooting across the eyepiece.

The article states that astronomers already have to correct for satellites currently in orbit, which number in the 10’s of thousands. Thus they are already adept at dealing with a significant satellite population in orbit, since we have made more strides in astronomical discoveries in the last 10 years than in the entire previous history of people looking at the sky with telescopes. I don’t see how a few thousand more satellites should pose that much more of a problem. Meanwhile the needs of many millions of humans to access the internet are going to be much better served. I think this is a case of the needs of the many outweighing the needs of the few. We should also invest in two or three orbital telescopes which would sidestep this kind of problem entirely.

It’s a bit early to jump on the FUD bandwagon. Doing a “calculation” to “determined they would be visible after sunset” is misleading at best and is a poster child of why “experts” are so mistrusted. Duh! Yes, and water is wet! Of course, if they are visible, it will be after sunset – but only for a short time thereafter. The rest of the time they will either be in direct sunlight or in Earth’s shadow. They are not a light source but can only reflect incident light.

It will only be a couple of weeks before they reach their final orbit and their solar panel reoriented towards the sun. I will trust actual results rather than someone’s assumptions and math as to why bumblebees can’t fly!

I very much expect that once the Starlink network is up and running, the astronomers will make big use of it as I suspect their internet service to their remote telescopes is not the best.

In addition, the driving force behind Starlight is for it to be a revenue source to fund the Starship development. Once it is flying, it ill facilitate much cheaper space borne telescopes far surpassing those on Earth. And it could probably enable a mission to repair the Hubble telescope.

The US gov must absolutely be laughing it up. People are going to complain about satellites which signify achievement. But I don’t hear them complaining about ‘national security’ flights of the national guard. You know the ‘training flights’ of the warthogs and their pilots which are actually messages of ownership. I much prefer Musk’s satellites.

While everyone is unloading on SpaceX and Elon Musk for the first salvo of satellites launched, lest we forget that OneWeb abd Jeff Bezos’ Blue Origin also have been ramping up and cutting metal to launch about 15,000 more internet router sats…