Report: Falcon 9 could be certified for DoD flights next month 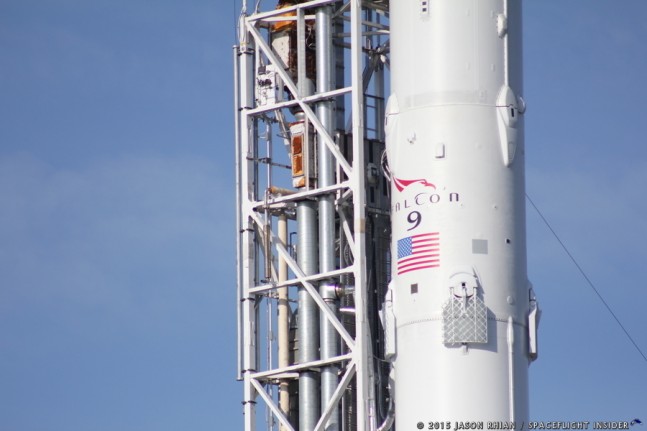 SpaceX's Falcon 9 v1.1 rocket could be certified to fly missions for the U.S. Air Force as early as June of this year. Photo Credit: Jason Rhian / SpaceFlight Insider

CAPE CANAVERAL, Fla — A report appearing in the Air Force Times has stated that Space Exploration Technologies’ (SpaceX ) Falcon 9 v1.1 launch vehicle could be certified to fly missions for the U.S. Department of Defense – as soon as next month (June). This could mark the close of a long-fought campaign to have the F9 approved to fly defense payloads and is part of an agreement between the U.S. Air Force and SpaceX after the NewSpace firm had filed a lawsuit against the use of the Russian-built RD-180 on DoD flights.

Filed in April of last year, the lawsuit was issued to draw attention to the fact that many national security payloads were being sent to orbit using the RD-180. This was at a time when Russia was conducting military actions in the Ukraine and had issued increasingly belligerent statements regarding the country’s involvement in U.S.’ space efforts. The result of the SpaceX suit was an injunction against the import of additional RD-180s, which was dropped shortly thereafter.

SpaceX and the U.S. Air Force came to terms under the EELV program shortly thereafter with the Hawthorne, California-based firm issuing the following statement: United Launch Alliance has stated that it will likely discontinue both the Atlas V rocket and the Russian-built RD-180 rocket engine that it uses. Photo Credit: ULA

The Air Force and SpaceX have reached agreement on a path forward for the Evolved Expendable Launch Vehicle (EELV) program that improves the competitive landscape and achieves mission assurance for national security space launches. Under the agreement, the Air Force will work collaboratively with SpaceX to complete the certification process in an efficient and expedient manner. This collaborative effort will inform the SECAF directed review of the new entrant certification process. The Air Force also has expanded the number of competitive opportunities for launch services under the EELV program while honoring existing contractual obligations. Going forward, the Air Force will conduct competitions consistent with the emergence of multiple certified providers. Per the settlement, SpaceX will dismiss its claims relating to the EELV block buy contract pending in the United States Court of Federal Claims.

According to the Air Force Times report, the commander of the Air Force Space and Missile Systems Center can certify the Falcon 9 so long as the company proves that it can design, test, and fly the rocket. Given that the Falcon 9 v1.0 and v1.1 have successfully carried out 18 flights, none of which encountered a major anomaly, it is likely that SpaceX has or will achieve this.

Under the terms of this agreement, SpaceX must also provide assurances that it can deliver payloads to orbit on a timely basis. Although prior flights of the F9 were often delayed, the company has begun to demonstrate that it can launch regularly as was the case just this past month. SpaceX launched one of its Dragon spacecraft on the sixth operational Cargo Resupply Services (CRS-6) flight to the International Space Station on April 13. Less than two weeks later on April 27, SpaceX launched the TurkmenAlem52E/MonacoSAT satellite. If and when the Falcon 9 is certified, it will be allowed to compete with the current rockets used to carry out defense missions – United Launch Alliance’s Delta IV and Atlas V family of boosters.

For their part, ULA has acknowledged that the Falcon 9 will likely be one of the two boosters required by law under the Evolved Expendable Launch Vehicle (EELV) contract. The Colorado-based firm has stated that it will focus on a new rocket, the Next Generation Launch System, which is hopes will fill out the EELV requirements.

SpaceX has made impressive strides in terms of its growth since its inception in 2002. In 2010, the company launched the first Falcon 9 rocket on a test flight. In the span of just five years since that time, the company has launched its Dragon spacecraft to the International Space Station seven times, upgraded to the new v1.1 version of the Falcon 9, signed a 20-year lease for NASA’s Launch Complex 39A, conducted its first launch from Vandenberg Air Force Base in California, and begun work on a new launch site near Boca Chica, Texas.

“flights of the F9 were often delayed,” Some of those delays were out of SpaceXs control. eg: Range Encroachment, Weather, & payload changes.

If anyone goes back and looks at the launch history of all rocket designs, the list of rockets not experiencing delays is incredibly small.

An NSF poster has done an analysis of F9 delays and there’s a significant reducing trend in the delays within SpaceX control. Certainly given the number of flights that the F9 has performed, the vehicle is demonstrating considerable reliability and increasing resilience.
Cheers

Unfortunately the SpaceX Falcon does not have the performance to lift many of the DOD satellites. SpaceX is also going to have to jack their prices up to meet all the DOD requirements- and since ULA has higher performing launch vehicles this means the delay-prone SpaceX entry is more than likely to fall flat on it’s face trying to compete- especially against the Delta IV heavy. The Air Force has already said they will keep using the Delta IV heavy no matter how much it costs if they have nothing else to lift their heaviest satellites. SpaceX can’t do it as the 27 engine Falcon Heavy has not even flown yet and will be even more delay-prone than the 9 engine low thrust model. It’s a long ways away from being certified and as they have fallen so far behind on everything else it is not likely the Air Force is going to be putting billion dollar spy satellites on it anytime soon. Musk has made a mess of it all with his legal antics and those games have been measurably detrimental to U.S. national security. He should go back to South Africa and sue their air force.

A little harsh, Bandyetagin. SpaceX went from Falcon 1 to Falcon 9 with little problem. Indeed, I`m sure they`ll go to Falcon Heavy just as easily. Times change, and we have to change with them. The days of throwaway rockets is coming to an end and we`ll be all the better off for it. It will bring a gigantic change to the space industry through reduced costs and the frequency of launches. It is time to look at things a little more positively don`t you think?

“The Colorado-based firm has stated that it will focus on a new rocket, the Next Generation Launch System, which is hopes will fill out the EELV requirements.”

“The Colorado-based firm has stated it will focus on a new rocket, the Next Generation Launch System, with the aim of meeting the EELV requirements.”