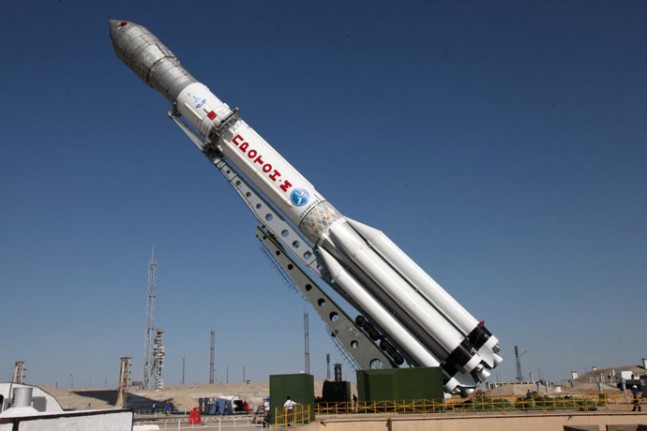 “If SpaceX offers on the market the prices and quality it is talking about and if it can put its Falcon 9 into a geostationary transfer orbit for $55.5 million, then they will be targeting a segment of satellites lighter than 4.5 tons, which is quite big. We can also achieve this level of costs, slightly higher,” he said. A Proton rocket with the Zvezda portion of the International Space Station lifts of from Baikonur. Photo Credit: Roscosmos

If the $81 million Falcon Heavy rocket proves successful as well, “we will see a new price format on the market”, Popov said. “Will we be able to compete with this price? I think we will, but we will have to invest in development,” the official added.

The corporation and the Khrunichev Space Center have been offering their Proton heavy lift launch vehicle services at prices exceeding $100 million as all key players such as Ariane-5 and Atlas have raised their prices for different reasons. “If we look at them, the fair price of a launch will be above $105 million, and we think it will keep growing,” Popov said.

URSC Director-General Igor Komarov said Khrunichev would create two “highly effective and compact” plants in Moscow and Omsk. The Moscow plant will reduce its range of products to three, including Proton-M rockets. Angara launch vehicles will be assembled in Omsk. Its plant will make five Angara heavy lift launch vehicles a year in ten years.

A super-heavy lift launch vehicle will be able to carry a payload of 80 tons to low-earth orbits. In the future, its capacity can be increased to 160 tons and more.

Angara will allow Russia to launch all kinds of spacecraft to any orbit. Now Russia can launch heavy satellites only aboard Proton rockets from Baikonur, which it leases from Kazakhstan for about $115 million a year. Medium lift and heavy lift launch vehicles can take payloads to the geostationary orbit as well.

The lightweight Angara-1.2PP rocket successfully blasted off from the northern Plesetsk Cosmodrome in the Arkhangelsk Region on July 9. Twenty-one minutes after the liftoff the test weight reached the designated area at the Kura range in Kamchatka, 5,700km from the launch site.

Khrunichev is planning to invest $1.49 billion in its programs until 2025 and sign long-term contracts for the production of Proton-M and two versions of Angara rockets, and Briz-M boosters in 2016-2025. The center is not planning to assemble modules for the International Space Station.

ILS was founded in 1995 and has launched more than 80 commercial Proton rockets since then. Khrunichev has direct oversight and controls as much as 70 percent of all Proton rocket manufacturing, including all engine systems. I have no doubts that the Russian Proton managers can lower the price to compete with the SpaceX Falcon. Where the Proton can truly excel is in launch failures…

Yeah the proton is cheap at 10% chance of spectacular failure. If the falcon 9 can maintain its present perfect record for primary contractors that going to be a great selling point.

The final image showing the Falcon 9 liftoff is not from Florida, but is the first Falcon 9 flight from Vandenberg Air Force Base, Space Launch Complex 4 East, in California.

No a better idea is to let the Russians drive themselves to bankruptcy trying to match the free market price SpaceX is providing. If SpaceX starts sucking from the Government teat the innovation dries up.