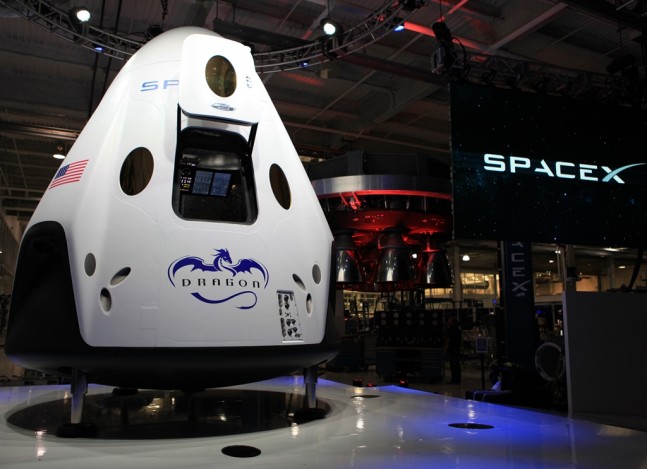 Space Exploration Technologies’ (SpaceX‘s) upcoming pad abort test represents the company’s next payment milestone under NASA’s Commercial Crew Program (CCP). With this test looming, it seemed an appropriate time to step back and take a “big-picture” look at SpaceX’s history with the CCP, where it stands now, and what’s yet to be done. A key element of SpaceX’s success has been the versatile and highly-successful Falcon 9 booster. Photo Credit: Carleton Bailie / SpaceFlight Insider

The first round of the CCP, or crew development program, known as CCDev 1, began in 2010 with funded Space Act Agreements (SSA), worth a total of $50 million, being awarded to five companies — Paragon Space Development Corporation, Blue Origin, Boeing, Sierra Nevada Corporation (SNC) and United Launch Alliance (ULA). SpaceX made a proposal under CCDev 1, but was not selected.

In 2011, the second round of the program, CCDev 2, got underway with the winners — Blue Origin, Boeing, SNC, and SpaceX — receiving funded SAAs, and three others — ULA, Alliant Techsystems (ATK) and Excalibur Almaz — receiving unfunded SSAs.

The winners of funded SAAs in the third round of the crew development program, initially called CCDev 3 but later renamed the Commercial Crew Integrated Capability (CCiCap) — Boeing, SNC and SpaceX — were announced on August 3, 2012, per a July 31, 2012, Selection Statement.

There are approximately 20 “payment” milestones in SpaceX’s CCiCap SAA. We say “approximately” because each milestone can be something of a “moving target” as they tend to evolve and change over time. One milestone may be subdivided, by agreement, into multiple smaller milestones.

As of April 2015, the best estimate is that SpaceX has completed 16 of the 20 current milestones. Under the latest CCiCap extension agreement, dated February 27, 2015, SpaceX has until December 31, 2015, to complete these last four milestones.

The fourth round of the crew development program consists of Certification Products Contracts (CPCs), not SAAs.

These CPCs were awarded in two phases. The first phase CPCs, totaling just under $30 million, were awarded to SNC, Boeing and SpaceX on December 10, 2012.

The second phase of the fourth round CPC awards is known as Commercial Crew Transportation Capability (CCtCap). The winners — Boeing and SpaceX — were announced on September 16, 2014, per a September 15, 2014, Source Selection Statement.

There are approximately 19 payment milestones in SpaceX’s CCtCap CPC, which could total up to $2.6 billion. NASA announced, on December 19, 2014, that SpaceX had completed its first CCtCap milestone — a Certification Baseline Review (CBR) of its plans for the manufacture, launch, flight, and recovery of its Crew Dragon (Dragon v2) capsule and Falcon 9 v1.1 rocket.

No other CCtCap milestone completions, with regard to SpaceX, have been announced as of this writing. Very informative article, thanks Scott. The whole team at SFI is doing a great job and a great service. It’s just like the ’60s again only better! I am excited to see the SpaceX pad abort test and with your cameras and SpaceX’s,too it should be a great show and a wild ride!
Regards and keep up the great work!

Thanks Casey. Much appreciated!

Very good article. Of course the pad abort test was pretty much a success with only a minimal glitch with one engine not quite nominal. I am looking forward to the in-flight abort test. This truly is the most exciting space race in my 39 years. I was not around for the 60’s race to space but I think ultimately the commercial crew program has sparked the promise of what the 60’s space race had promised but ultimately sputtered. I think we needed the last 40+ years to learn and test and discover LEO and now that NASA has gained all that knowledge we are ready to progress to the next step. Everything just happened to quickly in the 60’s, out of necessity of course due to the Cold War. Go SpaceX!