Booster 1058.1 sits atop the drone ship “Of Course I Still Love You”, as one of the many tugs used to complete the booster return guides it through the opening of the port at Jetty Park. Photo credit: Matt Haskell, SpaceFlight Insider

For many residents on the space coast, seeing a SpaceX Falcon 9 booster being returned to the Cape on the company’s autonomous drone ship “Of Course I Still Love You” is a regular occurrence. But this one was special. 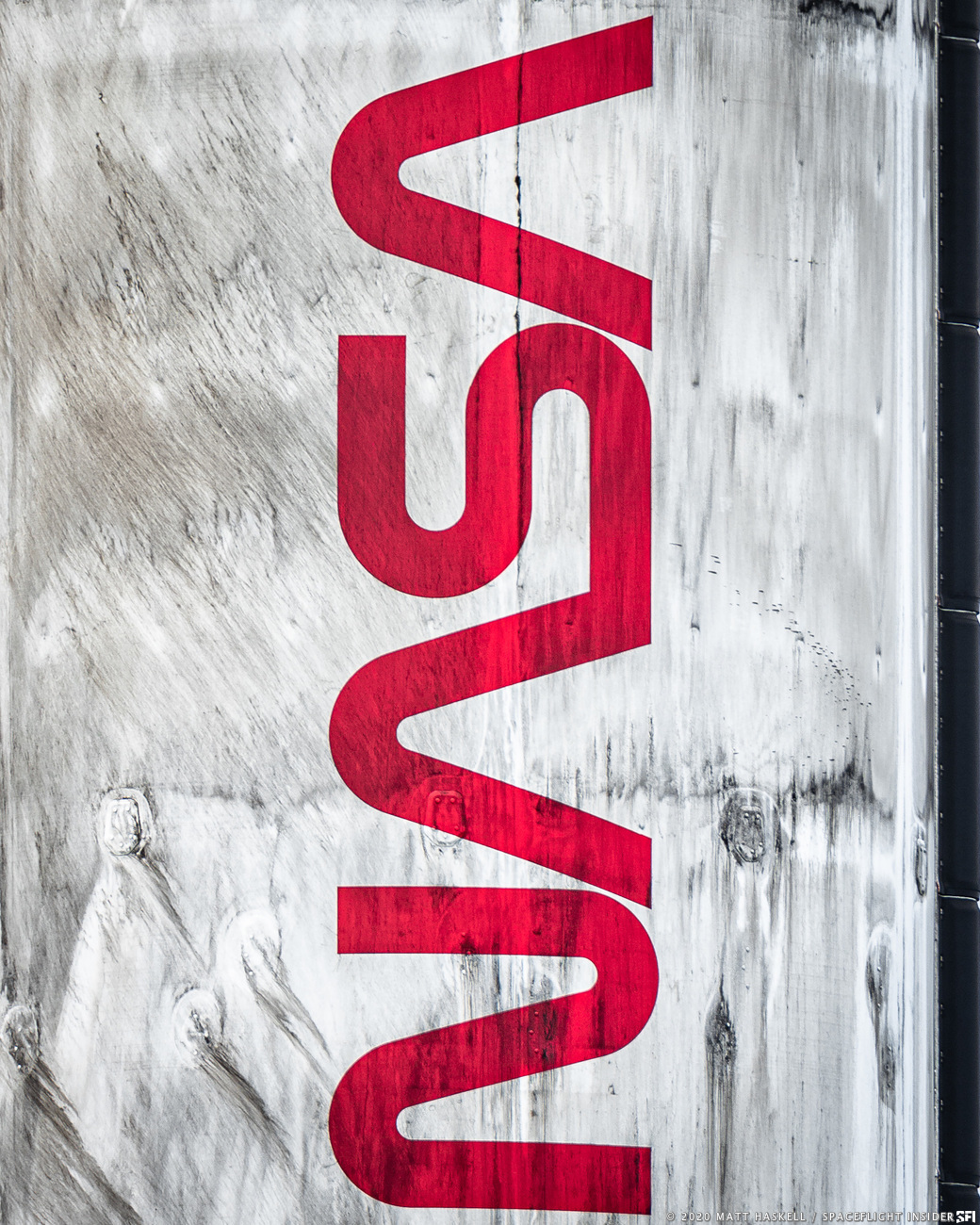 This booster had a bright red NASA worm on the side and had just returned from launching astronauts to space from American soil for the first time since the end of the Shuttle program 9 years prior.

I have borne witness to many booster returns, both on land and on sea. But this particular one was an entirely different experience. While the weather could have been significantly better, with clouds, high winds, and rough seas, it was still an event that those whom were there to witness its return, myself included, will never forget.

There’s something incredible about knowing what that rocket booster had been through, what it was a part of, and even about not knowing the mystery of what it will do next.

For me personally, it represented years of hard work, years of success and failure, thousands and thousands of hours of blood sweat and tears from the SpaceX employees coming to fruition. Crew Dragon was docked with the space station, and now the booster was home. All that remains is for the crew to finish their time on the station and return safely onboard their capsule. 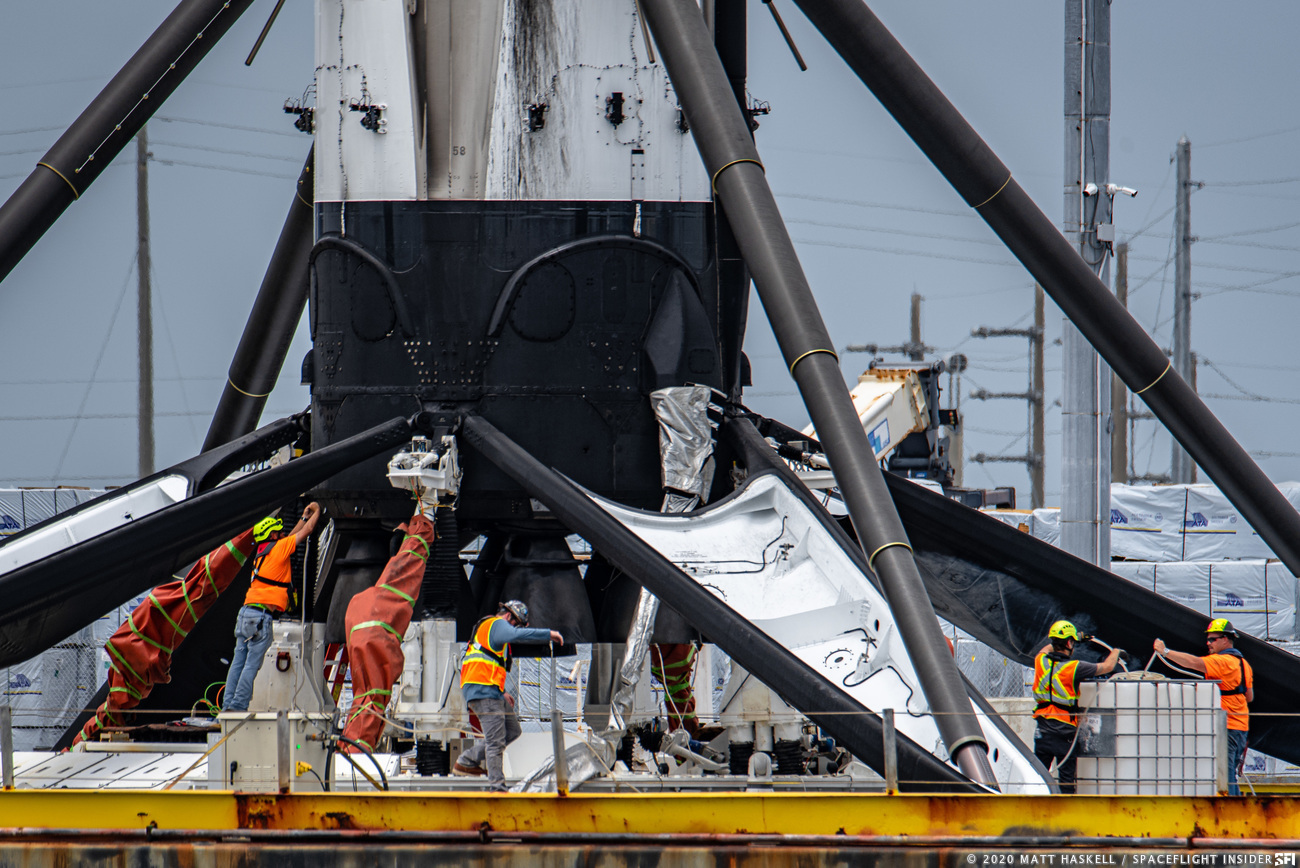 SpaceX workers perform tasks on the booster as it is slowly tugged towards its dock in the port. Normally these tasks are completed at sea, however due to the rough conditions this had to be done once safely in calmer seas. The workers boarded the drone ship from a tug while underway, following entry into the mouth of the port. Photo credit: Matt Haskell, SpaceFlight Insider

Covering the arrival in port of this historic booster was also a way for me to round out my coverage of the overall launch campaign. Ordinarily, I report on launches from either the Kennedy Space Center Launch Complex 39 press site, or on Cape Canaveral Air Force Station, contributing to our outlet’s coverage during the launch itself. For this mission however, the size of our team allowed me to direct my skills as a visual chronicler of history elsewhere, fulfilling a request to photograph some other significant events which were occurring on the Cape that day. For me then, to be able to experience this port arrival first-hand, capturing the imagery I did, and standing just a few hundred feet from the booster – it was cathartic.

I’ve photographed many SpaceX boosters, but none will top this one. It wasn’t just the mystique of what it had just done, but also the paint job. I have always been a big fan of the NASA worm logo. It was modern and different, but sadly met its end in 1992 after 17 years of usage as NASA’s official logo.

While the current-era meatball logo will always be a classic, for me personally nothing tops the simplistic aesthetic of the worm. 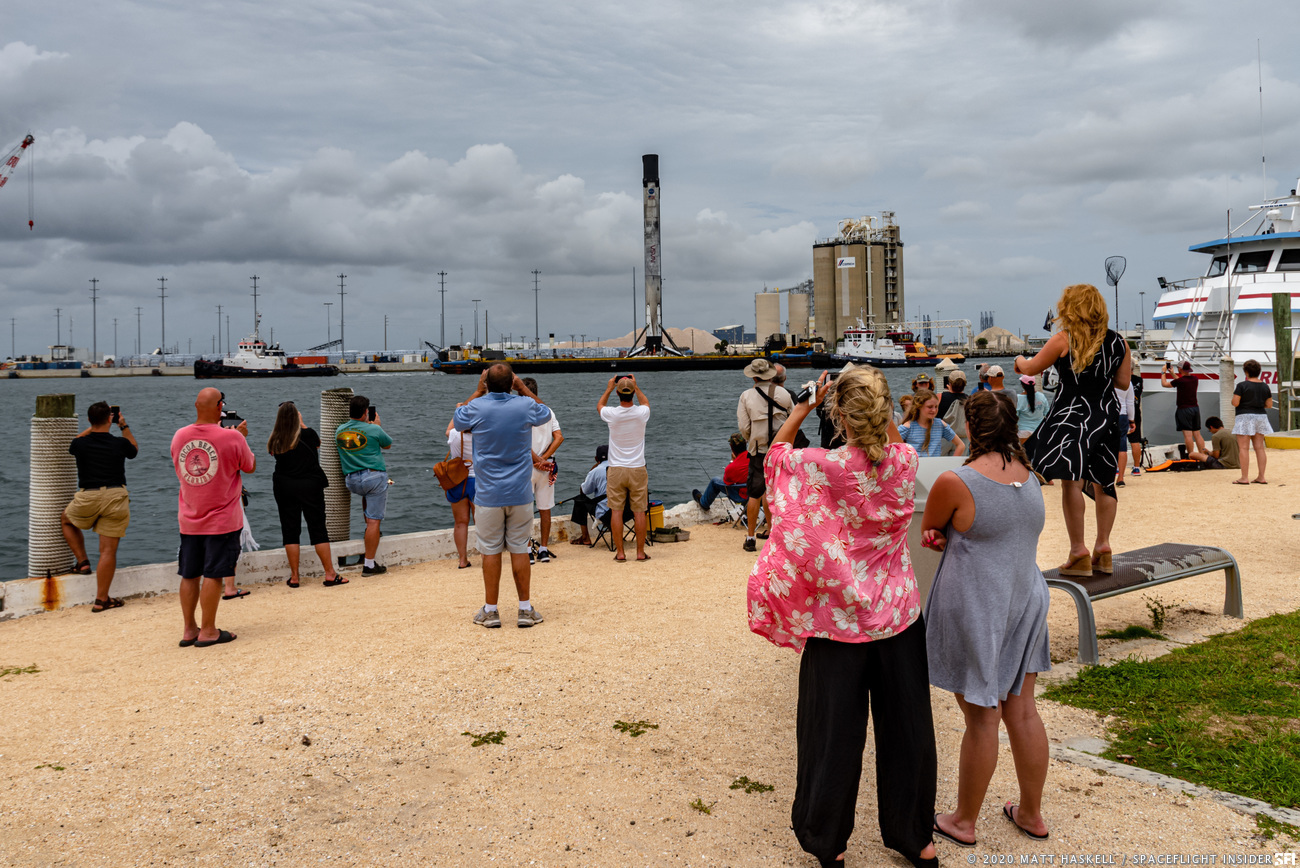 Members of the public and the media watch in awe as the drone ship and its support fleet of tugs is moved into place near its dock in Port Canaveral. Photo credit: Matt Haskell, SpaceFlight Insider

I’m really looking forward to seeing where this booster goes in the future, whether it returns to active duty to launch some science missions, satellites, or perhaps even astronauts, or if it finds its way into a well deserved museum collection as ‘the American rocket that returned American astronauts to orbit, launched from American soil’.

This is an editorial based on the opinions of the author and does not, necessarily, reflect those of SpaceFlight Insider. 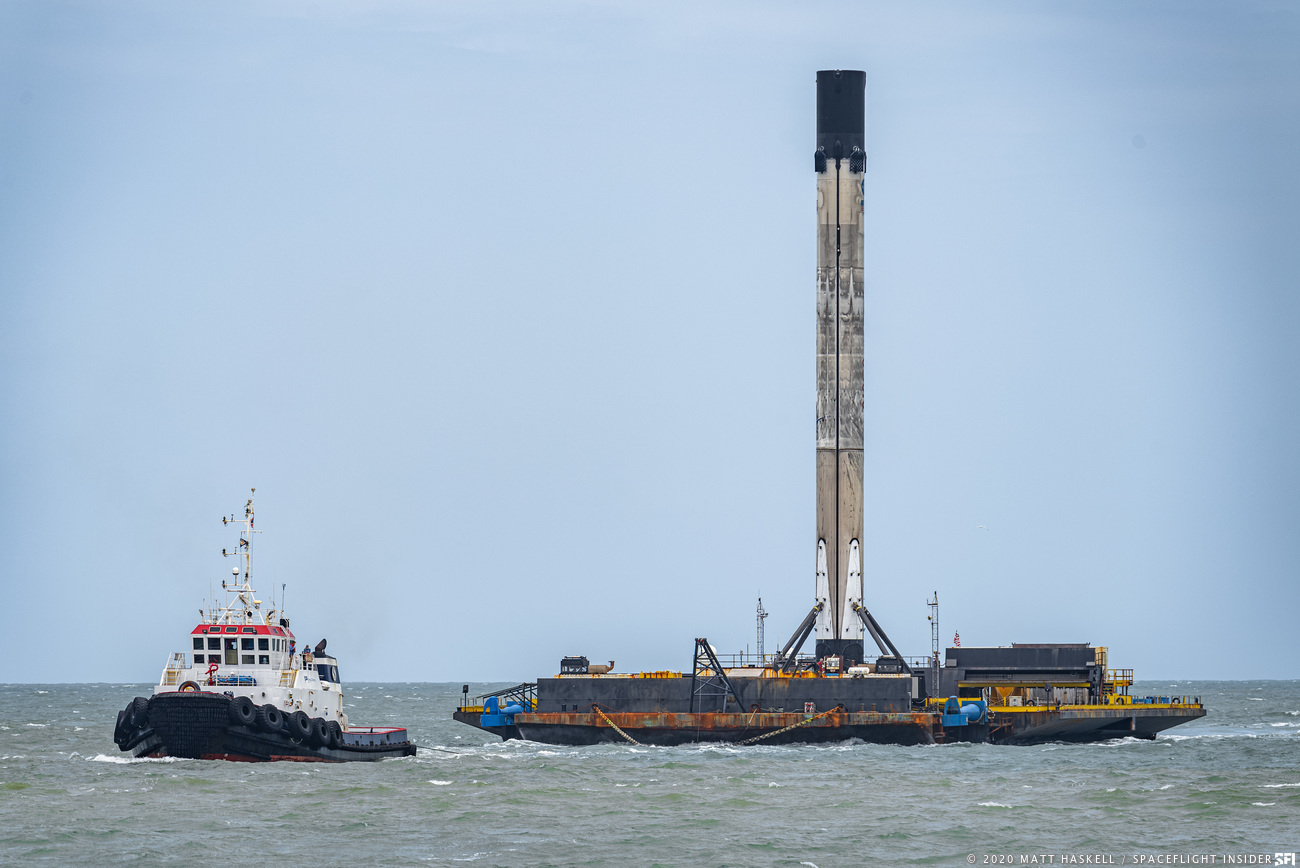 The drone ship, “Of Course I Still Love You”, begins to enter the mouth of Port Canaveral, pulled by one of the port’s many tugs. Photo credit: Matt Haskell, SpaceFlight Insider

I find it really disappointing that the news media refuses to cover anything related to this mission. Watching the launch, docking and recovery is something that our Country needs to see. Guess rioting, looting and protests are a lot more important, how sad that reporting has reached this level.