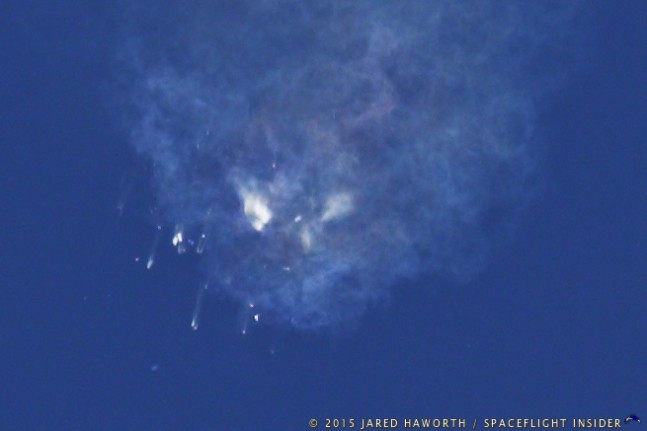 A SpaceX Falcon 9 v1.1 encountered an anomaly about two minutes into the flight of the CRS-7 mission - resulting in the complete loss of the booster and Dragon spacecraft. Photo Credit: Jared Haworth / SpaceFlight Insider

KENNEDY SPACE CENTER, Fla — A SpaceX Falcon 9 v1.1 encountered an anomaly approximately two minutes 19 seconds into the seventh operational flight to the International Space Station. Liftoff occurred right on time at 10:21 a.m. EDT (14:21 GMT) during the instantaneous launch window (1 second). Everything appeared to be proceeding normally until about the time of staging – when something clearly went wrong.

Elon Musk posted the following on Twitter at 10:40 a.m. EDT (14:40 GMT): “Falcon 9 experienced a problem shortly before first stage shutdown. Will provide more info as we review the data.”

NASA issued the following statement shortly after the accident: SpaceX CRS-7 lifted off from Space Launch Complex 41 at Cape Canaveral Air Force Station at 10:21 a.m. EDT. After liftoff, an anomaly occurred. SpaceX is evaluating the issue, and NASA Television will carry a news conference no earlier than 12:30 p.m.

Sad to see the explosion of the Falcon9 VI.I at Kennedy Space Center.

The mystique surrounding the falcon has been shattered forever. It is unlikely it will ever carry an astronaut now with two other capsules being built. This also means there is no way the falcon heavy will be seriously considered as a replacement for the Delta IV heavy.

This is the beginning of the end of NewSpace as the ISS is now quickly becoming a problem instead of an asset. The SLS is the last hope for the U.S. space program and funding will shift inexorably in that direction.

That is an awfully negative response and actually not really realistic. Shuttle, costing huge amounts more and taking lives with it, failed completely twice yet it came back. This is a normal event in the history of a launch vehicle. Of course the cause needs to be found and fixed but that is what you do after an accident. There were no lives lost and had there been a crew aboard they do have an escape system that has already been tested. It sounds as if you are rooting for failure with such an obviously biased post.

It is a realistic response- unlike comparing the falcon to the shuttle.

The falcon was going to be the anti-thesis of the shuttle; cheap and dependable. If you think it is normal for a human rated vehicle to blow up then you are the minority. It will never carry an astronaut after this and since NASA will not have much use for it and the DOD will not want it for spy satellite launches without their tax dollars this will probably see SpaceX close it’s doors within a year.

Really, dude. Remember, none of this happened until after the Air Force came snooping around with it’s recommendations. But, it’s not the end. The Falcon 9 second stage is made in house. So, if it was a production anomaly that led to the failure, it should be less complicated to fix. It’s not the end!!

For some reason, my gut says this is Gary Church. Anyone else seem to think so? “SLS is our only hope”
“Good-bye NewSpace”

Really Ferris? That is your comment about SpaceX? This Gary Church is that important? Wow.

Well, I responded to you in the other article, and then read this comment – yea, I think you are Gary Church. Which means you are a professional troll.

Sorry, but the Atlas blew up more rockets that SpaceX has launched and yet we but a man on that rocket. Spacex is a private rocket that will show it’s worth with other commercial launch’s and prove that it can and will carry human cargo better that anyone else.

“Sorry, but the Atlas blew up more rockets that SpaceX has launched-”

Sorry, but 1963 is just not meaningful in this context.

To quote Winston Churchill, “This is the end of the beginning.” They are not “new space” any more. They have just graduated into “old space.”

To quote “Gary Church”, who seems to be the subject of this thread suddently and NOT SpaceX……there is no cheap.

1) Do you have some sort of, you know, proof to your claim that “there is no cheap”?
And
2) Either this is Gary, or his clone.

Proof?
The proof is the picture at the top of the page of an expanding cloud of cheap junk falling out of the sky.

Duquesne- 1)the Delta IV Heavy only has 8 launches under its belt, so why you state that there will be no consideration for competition is curious.
2) the SLS, by everyone’s admission, will average only 1 launch a year at most. How is that the future?

Duquesne is going to fly lots of mythical interplanetary spaceships that NASA doesn’t even have a remote chance of funding, with or without the space station, on all those SLS cores he is going to build in Michoud. And with AR building about 3/4 an RS-25 in a good year that should work out well. SLS is pretty much the prime example of corporate welfare and congressional jobs program.

An obvious failure in the oxygen system of the second stage. The question is what part failed first, and what caused it. I guess it is a valve problem. It is amazing how long it held together after the leak stared. That first stage is some tough. It kept going until the second stage blew. One thing you can be sure of. Elon Musk won’t quit as long as he is still breathing. And his billionaire investors have deep pockets.

That’s why it’s important to move the launches to the private sector. You know damn well that Mr. Musk will get to the bottom of the failure quickly. No long, drawn out, politically driven “investigation” on who to blame. He’ll get the issue resolved/fixed and move forward. I’d book the next flight on a Falcon today if it was available.

The flight was insured as all commercial launches are. They will find the problem once the data is analyzed and go from there. What the problem was? Who can tell. However they did get data from the Dragon after the explosion which would indicate that a manned Dragon with its integral abort capabilities would have probably saved any personnel had they been on board. Any company that NEVER lost a launch vehicle? I cant think of any really.

God does not want us to leave the planet.