Night time is the right time for SpaceX STP-2 mission 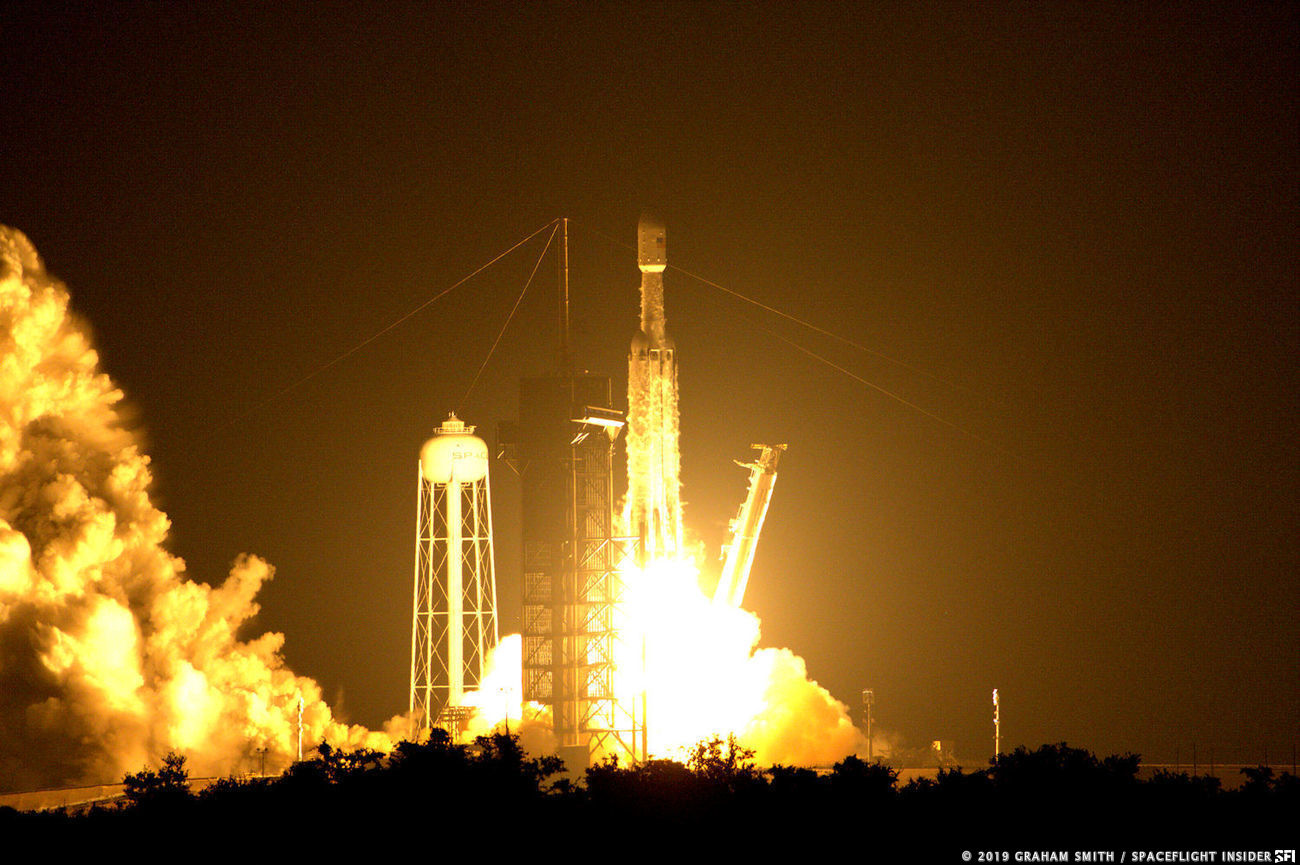 Lifting off at 2:30 a.m. EDT (06:30 GMT) June 25, 2019, from Kennedy Space Center’s Launch Complex 39A, this was the first night launch of the 230-foot-tall (70-meter-tall) Falcon Heavy rocket. However, this was three hours later than originally planned, with SpaceX citing extra ground systems checkouts following a ground hydraulic issue as the reason for delay.

The purpose for the night time fireworks display was the delivery of a wide range of payloads hefted aloft on behalf of the United States Air Force as part of Space Test Program 2 (STP-2).

Primary launch operations began a little less than an hour before T-0 with the go ahead for propellant loading. Rocket grade kerosene (RP-1) began flowing into the rocket’s first stage at about 50 minutes ahead of liftoff, with liquid oxygen loading beginning five minutes later. 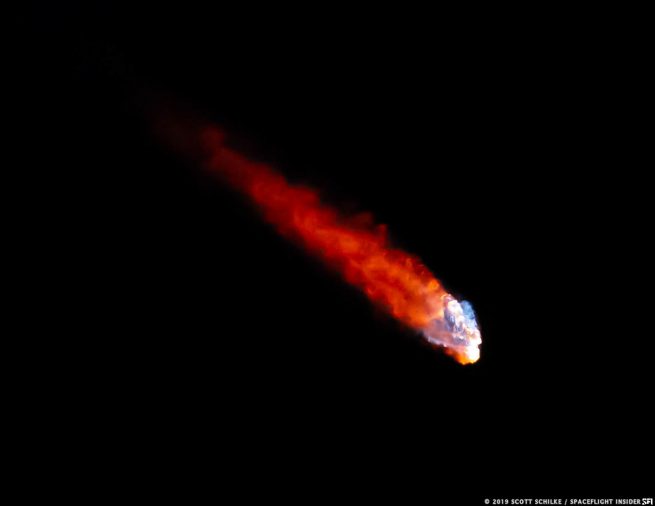 With everything looking good, SpaceX’s launch director verified the mission was go for launch. At two seconds, the 27 engines ignited and began spooling up to flight-level thrust. After that, the Falcon Heavy took flight.

Within 42 seconds of liftoff, the booster stack reached Max-Q, the moment of peak mechanical stress on the rocket as it accelerates through Earth’s lower atmosphere.

The two side boosters continued burning until about 2 minutes, 27 seconds into the flight before cutting their engines off and separating. Less than 20 seconds later, a subset of three engines on each re-ignited and began boosting back toward Cape Canaveral.

Meanwhile, the center core continued burning until a mission elapsed time of roughly 3 minutes, 27 seconds. Upon engine shutdown, the core separated from the second stage and began re-orienting itself for its trip back toward Earth.

The second stage ignited its lone Vacuum Merlin engine shortly after stage separation. It continued to burn for another five minutes to enter its first orbit.

STP-2 was a big deal in a number of ways. It marked the first time hardware for the Defense Department flew atop a Falcon Heavy. It was also the first time the rocket launched multiple payloads into different orbits.

Only about 12 minutes had elapsed from the time the Falcon Heavy left the pad until the first payload was sent on its way. A little more than three hours and 34 minutes after the start of the mission, the final spacecraft was deployed.

The United States Air Force wasn’t alone in using the Falcon heavy to send send its payloads to orbit. Both NASA and the National Oceanic and Atmospheric Administration also had spacecraft, with critical missions, tucked inside the rocket’s expansive payload fairing. 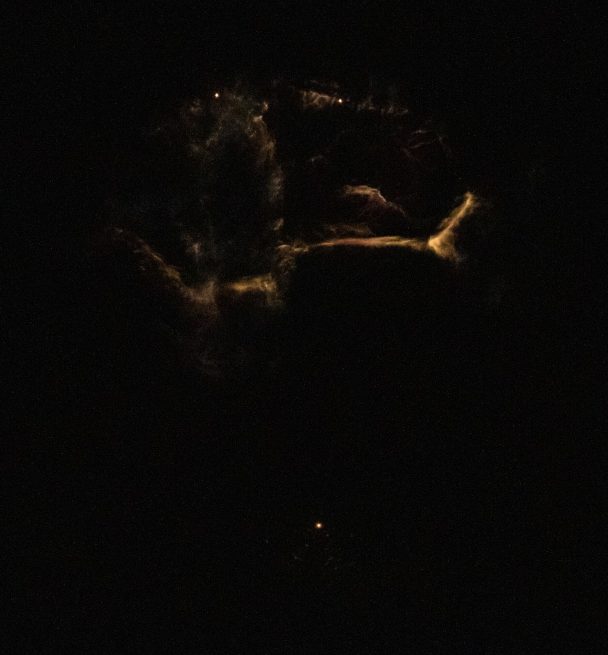 The two side boosters performing their boost back burn shortly after separating from the center core. Photo Credit: Joel Kowsky / NASA

As noted, SpaceX has made the reuse of the rocket’s first stages seem almost routine (although nothing involving liquid oxygen and RP-1 propellant can ever be described as routine). The STP-2 mission was no different. The triple-body design utilized by the Falcon Heavy has the capability of seeing all three of its first stage cores land.

The two exterior boosters were previously used on the April 11, 2019, Arabsat-6A mission. Those boosters once again touched safely back down at Cape Canaveral’s Landing Zones 1 and 2.

Meanwhile, the center core attempted to land out in the Atlantic Ocean on the Autonomous Spaceport Drone Ship “Of Course I Still Love You.” However, something during the landing burn appeared to go wrong. Cameras aboard the drone ship showed the core flying nearly horizontally away from the platform to crash into the ocean a short distance away.

It’s important to note that this was the most challenging landing attempt ever made by SpaceX with the drone ship positioned a record-setting 774 miles (1,245 kilometers) downrange.

In another first, SpaceX’s recovery ship Ms. Tree (formerly Mr. Steven) successfully caught a payload fairing half inside its giant net. This was announced by SpaceX more than an hour after launch. The Falcon payload fairing deploys a parafoil during its descent and can soft land in the water. However, avoiding the corrosive nature of salt water is preferred.

SpaceX has tried (unsuccessfully) to recover payload fairings via a ship with a net for more than a year.

In addition to the STP-2 mission being the third Falcon Heavy flight and the second of 2019, this was SpaceX’s eighth launch of the year. With the two landed side boosters, the company has successfully landed its Falcon cores 43 times.

SpaceX’s next planned rocket launch is expected to be the CRS-18 Dragon mission, which has a targeted launch date of July 21, 2019. It’s primary cargo is set to be the third International Docking Adapter (IDA-3).

IDA-3 is set to join IDA-2 (also launched by a SpaceX Dragon cargo ship) at the International Space Station in order to facilitate multiple Commercial Crew vehicles at the outpost. IDA-1 was destroyed during a June 2015 Falcon 9 launch failure.

What about the USAF’s Titan 3-c series?