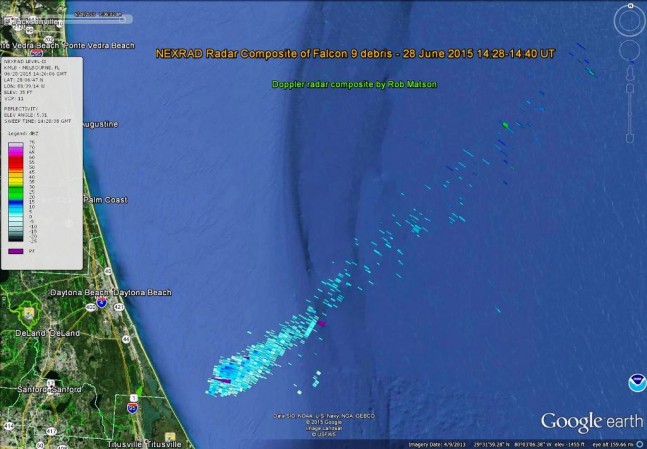 CAPE CANAVERAL, Fla — In the wake of the loss of a SpaceX Falcon 9 v1.1 rocket and Dragon spacecraft on Sunday, June 28, NASA has issued an advisory for those who encounter debris from the doomed mission. The prerequisite investigation has also caused the NewSpace firm to push back the next scheduled flight of the Falcon 9, with National Oceanic and Atmospheric Administration’s (NOAA) Jason-3 satellite, which had been scheduled to take to the skies on July 22.

A SpaceX blog on the U.S. Space Agency’s website has issued the following statement concerning any debris that is spotted from the failed CRS-7 mission: SpaceX has established a recovery hotline and email address for anyone who finds debris from the SpaceX CRS-7 mission. The phone number should be active by 4 p.m. EDT.
Debris Recovery Hotline: 866-392-0035
Debris Recovery Email: recovery@spaceX.com

The website SpaceWeather.com posted imagery obtained from NOAA showing the debris trail reaching out into the Atlantic Ocean.

This was the first significant failure of a Falcon 9 and it has caused SpaceX to hold off on upcoming launches.

The Verge has reported SpaceX doesn’t know the exact impact Sunday’s accident will have on the aerospace firm’s current launch manifest. Sources within NASA have stated that the next flight of the Falcon 9, the launch of the Jason-3 spacecraft for NOAA, have been rescheduled for no-earlier-than August 8. However, it is likely that the delay will be longer.

After successfully lifting off at 10:21 a.m. EDT (14:21 GMT), the Falcon 9 disintegrated some two minutes and nineteen seconds into the flight. The apparent cause of the accident was an oxygen tank located on the Falcon 9’s second stage. According to FOX Boston, the Falcon 9 was traveling at approximately 2,900 miles per hour and at an altitude of 27 miles when the accident occurred.

Members of the aerospace establishment stood by the NewSpace firm during this setback.

Our thoughts are with the @SpaceX team. We understand getting to space is hard, but very important work. Wishing you a speedy recovery. – Orbital ATK posted on Twitter after the accident.

my question is spacex dragon destroyed or not ?

if not destroyed whree is ?

rocket destroyed after or before saparation of 1 st stage ?

dragaon is capacity to resitance explod any part of rocket ?

Hi Shrinivas,
1. Yes, both the Dragon and Falcon 9 rocket were destroyed.
2. The debris fell into the Atlantic Ocean off the Coast of Florida.
3. It does not appear at this time that separation completely occurred.
4. The uncrewed version of Dragon does not have the capability at present to survive an explosion of the Falcon 9.
Sincerely, Jason Rhian – Editor, SpaceFlight Insider