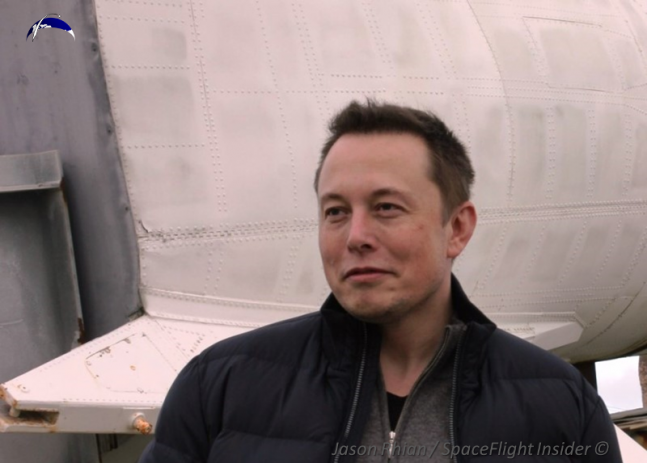 SpaceX's Founder and CEO, Elon Musk, has posted some tweets which question the ethics involved behind the hiring of a former Air Force official. Photo Credit: Jason Rhian / SpaceFlight Insider

On Sunday, the National Legal and Policy Center (NLPC), a non-profit entity founded in 1991 to promote “ethics in public life through research, investigation, education and legal action,” which is best known for exposing the Darleen Druyon / Air Force / Boeing tanker scandal in 2003, published an article questioning the hiring of a former Air Force procurement official, Roger “Scott” Correll, by Aerojet Rocketdyne. The point man for one rocket manufacturer recently raised this issue in a flurry of tweets.

According to the NLPC article, “[o]ne of [Correll’s] last official acts before his “retirement” in January was to oversee a deal with . . . . United Launch Alliance (ULA) for . . . . 36 future launches.” Aerojet Rocketdyne is one of the primary supplier of rocket engines to ULA. On Thursday night, Elon Musk, founder and CEO of SpaceX, took to Twitter (@elonmusk) suggesting that Correll sought a job with SpaceX, was rejected, and then took a job with Aerojet Rocketdyne in exchange for the sole-source contract between the Air Force and ULA.

“Reason I believe this is likely is that Correll first tried to work at SpaceX, but we turned him down. Our competitor, it seems, did not.”

Musks tweets trail a contentious back-and-forth which has gone on since this past March when Musk claimed his company had met the U.S. Air Force’s 3 launch requirement and that his firm could handle all of the U.S. Air Force’s launches. Musk went on to sue the Air Force over the issue of the block purchase of 36 booster cores, especially those using the Russian-built RD-180. SpaceX’s lawsuit gained some initial traction and was awarded an injunction on April 30 by Judge Susan G. Braden of the U.S. Court of Federal Claims. By May 9, the injunction had been lifted by the same judge.

Yes, this happens a lot. Senior officers, just before retirement, curry favor with private industry by exchanging contracts in return for financial rewards or some other pecuniary advantage. It’s pure corruption, since the officer is essentially trading US tax dollars for personal gain. It should be discovered and harshly punished every time it happens, but the authority that goes with their rank serves as a shield against Fraud-Waste-Abuse criminal charges.

In fact, where such corruption can be construed as treason under Article 99 of the UCMJ, the officer should be tried for a capital crime and face the death penalty if convicted.