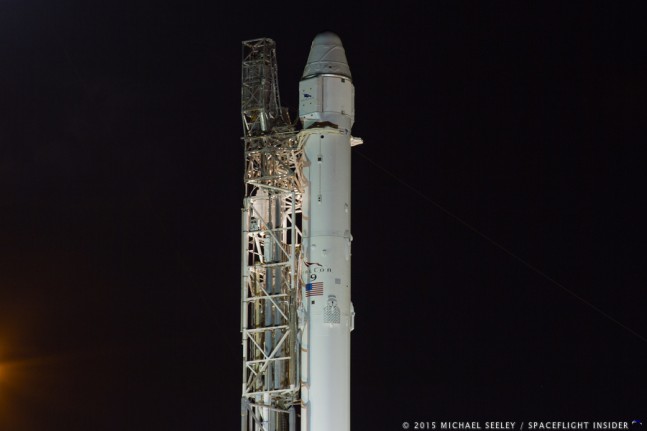 SpaceX is preparing to conduct the 19th launch of one of their SpaceX Falcon 9 boosters with the CRS-7 mission for NASA. Photo Credit: Michael Seeley / SpaceFlight Insider

CAPE CANAVERAL, Fla — California-based Space Exploration Technologies (SpaceX ) has a Falcon 9 v1.1 booster at Cape Canaveral Air Force Station’s Space Launch Complex 40 (SLC-40) in Florida, ready to fly the seventh operational mission under NASA’s Commercial Resupply Services (CRS) contract. The spacecraft was set to fly sooner than the current liftoff date/time of June 28 at 10:21 a.m. EDT (14:21 GMT); however, distant events have caused the launch to be pushed back. Tomorrow’s flight stands to prove the technology that could reduce the cost of launching satellites to orbit as well as resupplying the ISS.

On April 28, 2015, the Russian Progress M-27M spacecraft encountered an anomaly caused by a “peculiarity” between the rocket’s upper stage and the Progress spacecraft itself. The cargo freighter was sent spinning wildly, with mission planners unable to regain control – the vessel re-entered and burned up in Earth’s atmosphere on May 8.

With those supplies lost, NASA had to reallocate its resources so as to ensure that the crew on board the International Space Station have what they need. The station normally has a surplus of supplies on hand to support the Expedition 44 crew currently on board the ISS as well as future crews that venture skyward to serve on the international outpost.

This flight will not only be a resupply mission to the orbiting laboratory, but it could also mark the turning point in terms of the cost to ferry payloads to orbit. Up until now, rockets delivered their payloads to orbit and then would re-enter Earth’s atmosphere where they would burn up. This meant that one of the most expensive portions of the launch vehicle – its first stage with the rocket engine(s) – were single use only. SpaceX will again attempt to land the first stage of the Falcon 9 on a platform placed out in the Atlantic Ocean. Photo Credit: SpaceX

Since the inception of the Space Age, it was believed that this was the only means in which to conduct business. Indeed, when SpaceX unveiled its plans to have the first stage return from orbit, it was viewed as fantasy. That is until the NewSpace firm almost achieved these ends with its previous two attempts. In fact, if not for the first stage tipping over and exploding, SpaceX would have accomplished this feat on April 14, 2015.

SpaceX inked the $1.6 billion Commercial Resupply Services contract with NASA in 2008. The company has already launched 18 of the firm’s Falcon 9 boosters since 2010. The first five flights used the v1.0 version of the booster, with the last of these rockets taking to the skies in 2013.

At present, the turbulent Florida weather appears to be working with SpaceX. Current predictions have the weather providing as much as a 90 percent chance of favorable conditions for launch.

What are distant events ? We know spacex is very secretive when it comes to their many delays, but why ?

What do you mean by “distant events”, and what were they?