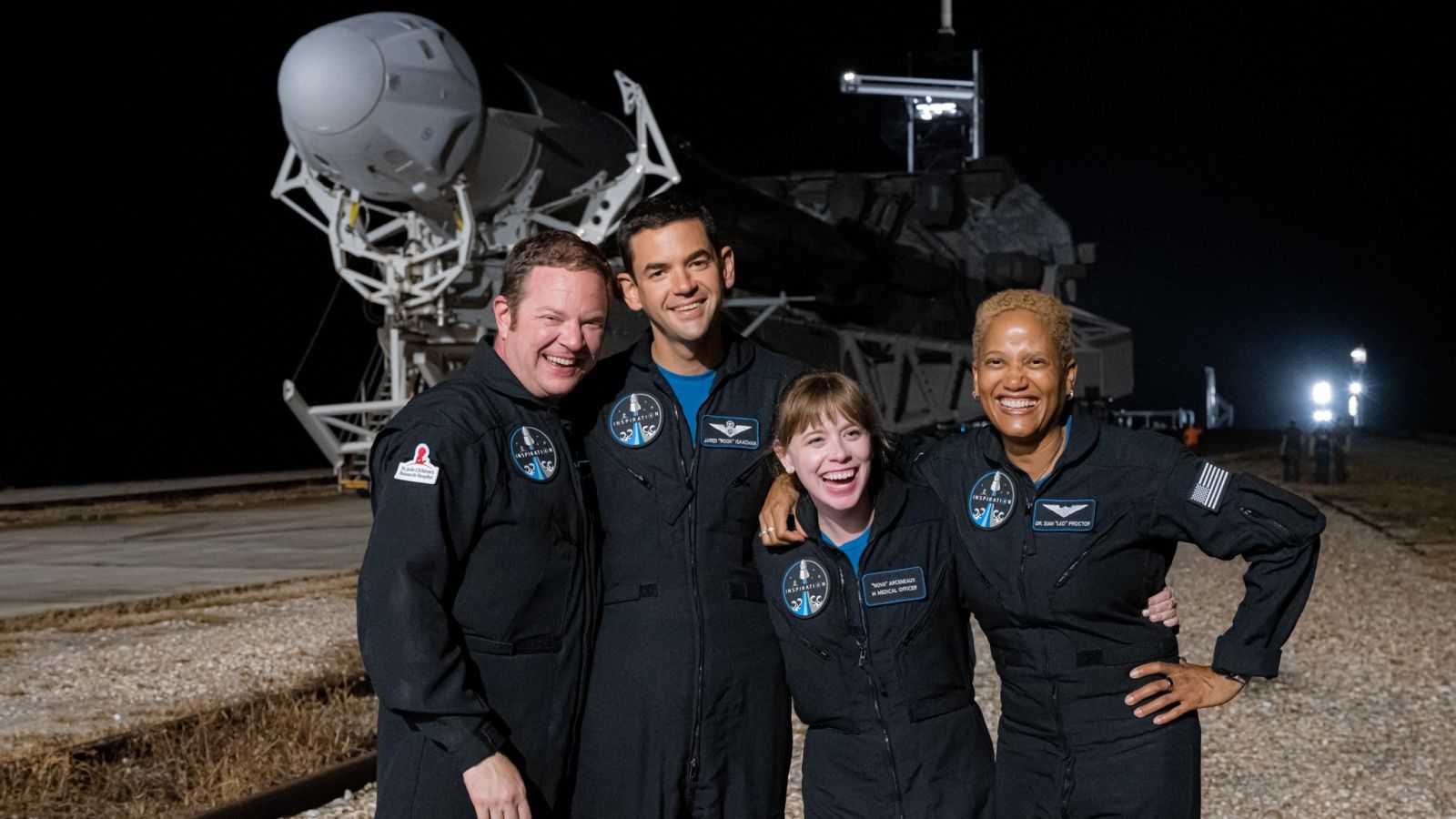 The Inspiration4 crew in front of their Falcon 9 and Crew Dragon spacecraft before a launch rehearsal on Sunday night. From left to right: Chris Sembroski, Jared Isaacman, Hayley Arceneaux and Sian Proctor. Credit: Inspiration4 / John Kraus

For the first time in history, an all-private civilian crew is set to launch into orbit. Called Inspiration4, four non-professional astronauts are expected to spend three days circling Earth in a SpaceX Crew Dragon spacecraft.

Liftoff atop a Falcon 9 rocket is currently scheduled to occur during a five-hour window that opens at 8:02 p.m. EDT Sept. 15 (00:02 UTC Sept. 16), 2021, from Launch Complex 39A at NASA’s Kennedy Space Center in Florida. The weather is expected to have an 80% chance of acceptable conditions, however, that doesn’t take into account the various potential abort zones up the East Coast of the United States all the way to Ireland.

It is was organized by 38-year-old billionaire and entrepreneur Jared Isaacman, who is also a highly-capable jet warbird aircraft pilot. When he found out from SpaceX he could be the first to fly an all-commercial mission in Crew Dragon, he fronted $100 million to $200 million required and partnered with St Jude Children’s Research Hospital in a campaign to give away two of the missions seats and raise $200 Million for children’s cancer research. 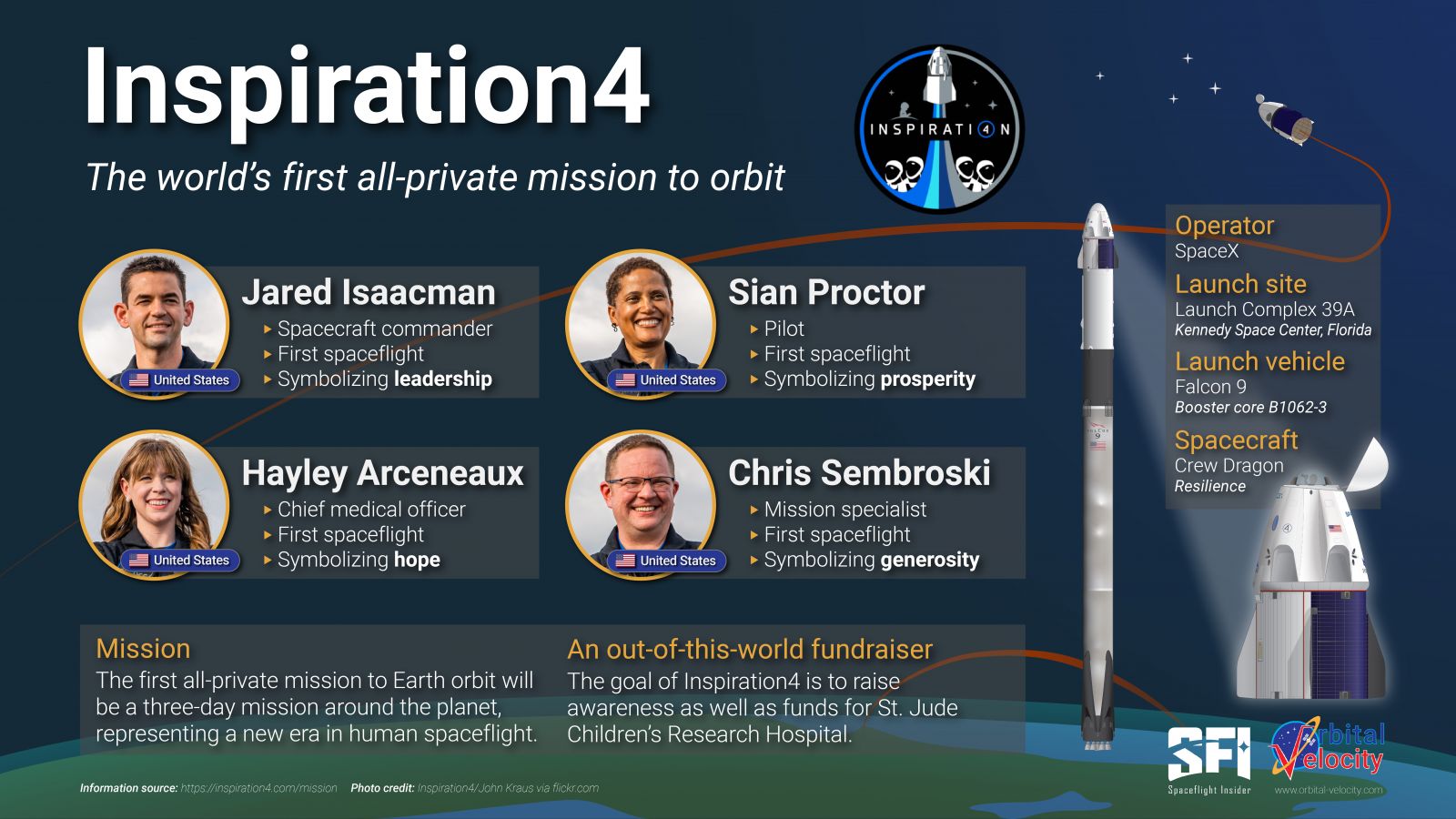 An infographic over the Inspiration4 crew and its mission. Credit: Derek Richardson / Spaceflight Insider / Orbital Velocity

Each of the four seats on the Inspiration4 mission represent one of the four core mission values: leadership, prosperity, hope and generosity. Using the all-civilian crew representing these pillars, the crew hopes to live up to the missions name and inspire the world to dream big.

Isaacman will serve as the missions commander, representing the pillar of leadership.

The missions second seat was offered to St. Jude to select a representative from the hospital. They chose 29-year-old Hayley Arceneaux, a former patient of the organization and childhood cancer survivor. She now works with the hospital as a physician assistant.

Arceneaux represents the mission value of hope. When she flies, she will be the youngest American to ever fly into orbit.

Representing the pillar of generosity, is 42-year old Chris Sembroski, a United States Air Force veteran and engineer at Lockheed Martin. He won the seat after donating to the St. Jude fundraising campaign, supporting the mission of the hospital with personal generosity.

The final seat in the mission, representing the pillar of Prosperity, is 51-year old Sian Proctor, who is herself an accomplished general aviation pilot and business owner. She won her seat on the mission using her business and science outreach.

In addition to the inspirational aspect of the mission, the crew will also be performing scientific research while on orbit. Using themselves as the subject, the crew will perform various health-based research initiatives to increase humanity’s knowledge on the impact of spaceflight on the human body. 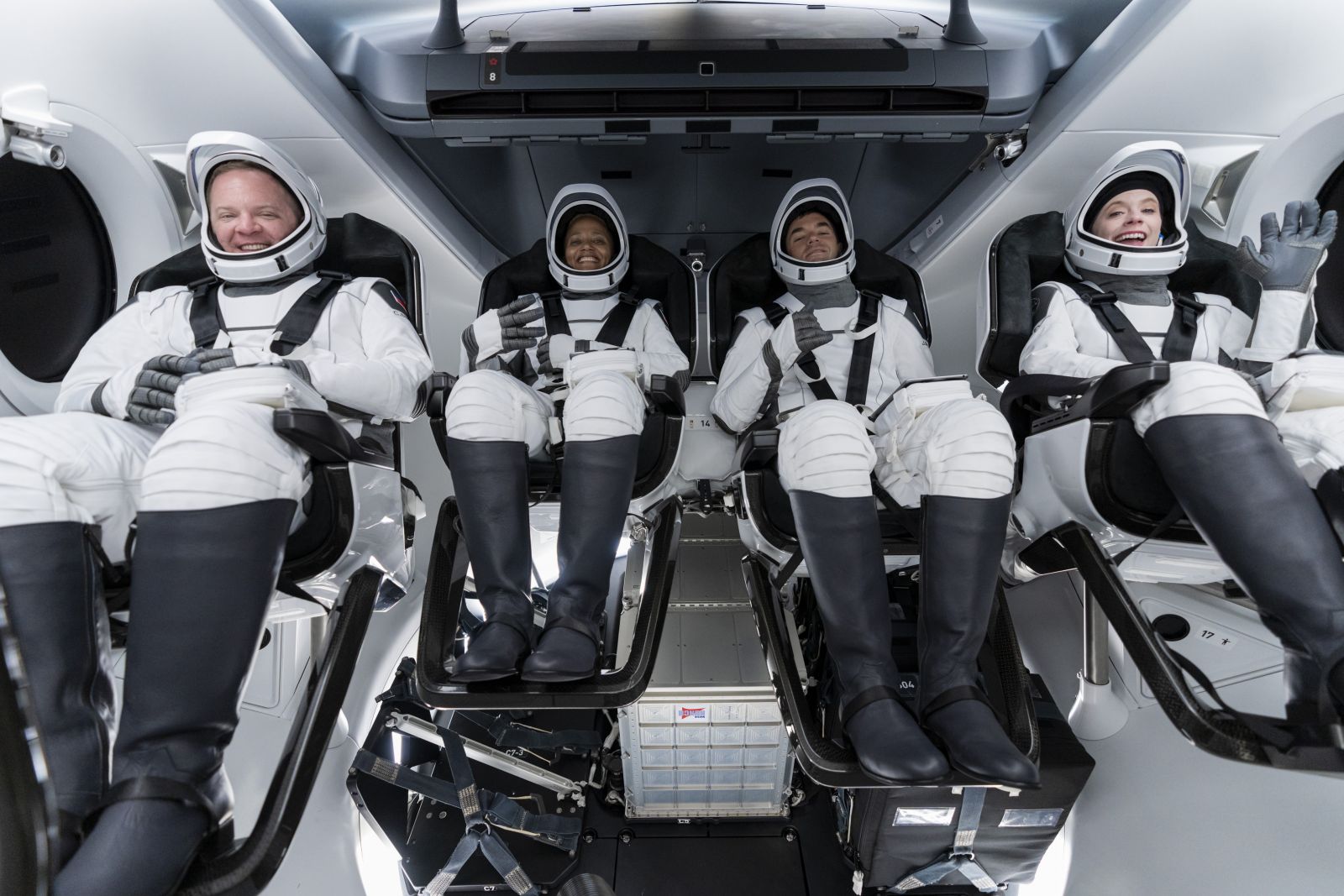 The Inspiration4 crew in their Dragon spacecraft during a launch rehearsal on Sept. 12, 2021. From left to right: Chris Sembroski, Sian Proctor, Jared Isaacman and Hayley Arceneaux. Credit: Inspiration4 / John Kraus

Partnering with the Translational Research Institute for Space Health, TRISH, the crew and investigators on the ground will collect research on electrocardiogram activity, movement, sleep, heart rate, rhythm, blood oxygen saturation, cabin noise and light sensitivity while on the ground, on orbit, and upon return. The crew will also undergo many of the same tests NASA astronauts face during and after their missions.

Not only is the mission utilizing a previously flown-booster, but the Dragon capsule being utilized has also flown.

Previously used during the Crew-1 mission to the International Space Station, the capsule, named Resilience by its first crew, has received its own unique modification for this mission. Installed in place of the capsule docking adapter, which is normally required for missions to the International Space Station, will be a domed cupola window allowing for 360 degree views of the Earth and space.

The window will allow for the crew to photograph their environment around them, as well as be filmed from a new camera installed in the spacecrafts retractable nose cone.

The mission will last a total of three days before returning to Earth via a parachute-assisted splashdown off the coast of Florida in either the Gulf of Mexico or the Atlantic Ocean, depending on weather conditions. 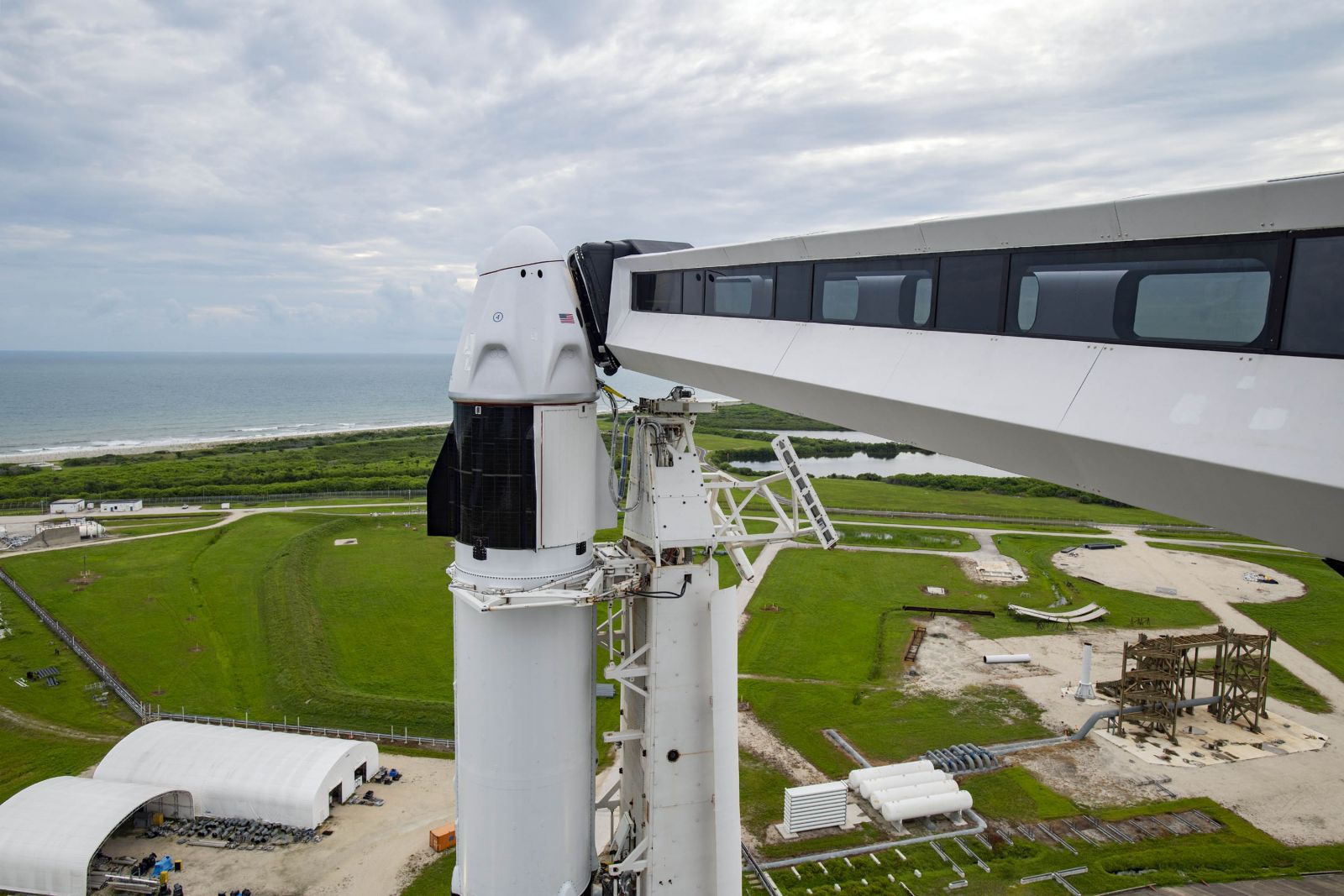 This flight is also uniquely targeting a higher altitude orbit by aiming for an apogee of 370 miles (590 kilometers). To put that altitude into perspective, crewed spaceflight missions typically launch to the ISS at an apogee of 260 miles (420 kilometers). During the space shuttle era, the highest altitude flights were to the Hubble Space Telescope, itself at the lower altitude of 335 miles (540 kilometers).

After the flight-proven Falcon 9 first stage finishes its job, roughly 2.5 minutes into the ascent, it’ll separate from the rest of the rocket and begin the process of returning to Earth to land on SpaceX’s autonomous drone ship “Just Read the Instructions.”

When Inspiration4 launches, it’ll mark the first time in history that three Dragon spacecraft will be in orbit simultaneously, with this mission joining the CRS-23 and Crew-2 spacecraft, which are docked to the ISS.

The launch will be extensively documented and viewable on various online platforms, most notably including Netflix as part of a multi-episode documentary, of which the first episodes are viewable now.