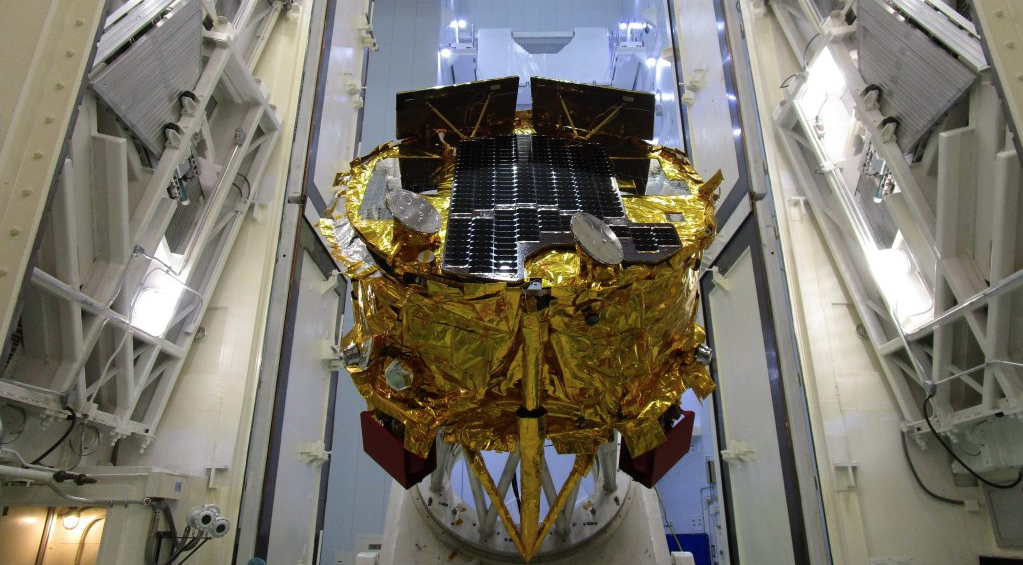 SpaceIL’s Beresheet aims to be the first private spacecraft to land on the Moon. Photo credit: Spaceflight

SpaceX is preparing for its second mission of 2019—and the company’s first rideshare flight to geostationary transfer orbit—with the launch of the Nusantara Satu (also known as PSN 6) communications satellite, along with the Israeli Beresheet lunar lander and several smaller payloads. 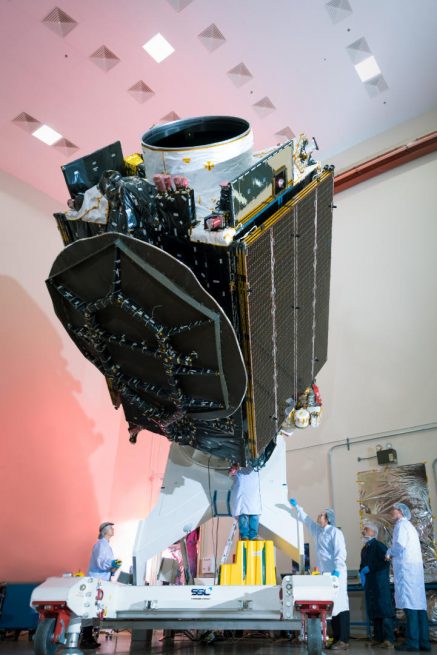 The NewSpace company performed its customary static fire test on the evening of Feb. 18 and announced soon after via Twitter that the test was completed and were indeed targeting Feb. 21. According to the 45th Weather Squadron, the weather for the attempt is expected to have an 80 percent chance of acceptable conditions with the primary concerns being thick and cumulus clouds. Conditions are expected to be the same in the event of a 24-hour scrub.

The main payload for this mission is the Nusantara Satu communications satellite, which was built by SSL and is managed by Indonesian satellite operator PT Pasifik Satelit Nusantara (PSN).

PSN selected SSL to build the satellite as they met the company’s need for a complete solution.

“We are pleased to work with SSL for our new PSN VI satellite project,” said Adi Rahman Adiwoso, president director of PSN, in a release issued by SSL. “SSL has provided PSN with a solution including a committed launch, which strengthens and supports PSN’s business plan and strategy going ahead.”

The spacecraft is built on the SSL 1300 satellite bus, which SSL said is the world’s most popular spacecraft platform. Tipping the scales at 10,439 pounds (4,735 kilograms), the 1300 has been the basis for several series of satellites, such as Intelsat, Echostar, and GOES.

The SSL 1300 bus is highly customizable, depending on client needs, and supports operational lifetimes of at least 15 years. PSN 6 is outfitted with an electric propulsion system for final orbit placement, which is planned to be at 146 degrees east longitude and should cover the Indonesian archipelago and Southeast Asia with 26 C-band, 12 extended C-band, and 8 Ku-band spot beam transponders.

PSN 6 is the first high throughput satellite to serve Indonesia and the first owned by a private communications company in the archipelago.

Ridesharing—the practice of multiple payloads riding together on a single launch vehicle—has long been a mainstay of Arianespace and the Indian Space Research Organization (ISRO), but it is something that only comparatively recently has been undertaken by a U.S.-based launcher such as SpaceX.

Helping smooth the logistics necessary for these rideshare arrangements is the mission-management company Spaceflight. While it has built a reputation in managing multi-customer missions, this flight represents something new for the rideshare company: its first mission beyond low-Earth orbit. 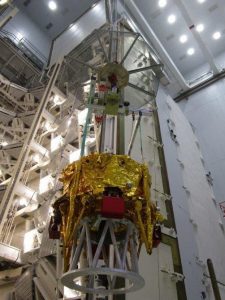 The Beresheet lander completes final testing for its mission to land on the Moon. Photo credit: SpaceIL

Although less ambitious compared to the massive spacecraft passenger numbers lofted on the SSO-A flight in 2018—also a Spaceflight mission—the flight is nevertheless special in its own right.

Indeed, if successful, the mission could see the first commercial spacecraft reach the Moon.

The four-legged lander, named Beresheet (Hebrew for “in the beginning”), represents not only the first privately-funded spacecraft to aim for the Moon, but is also Israel’s first spacecraft designed to land on the lunar surface.

SpaceIL’s Beresheet arrived at Cape Canaveral in mid-January 2019 to undergo final preparations for launch and integration atop the PSN 6 satellite.

“After eight years of hard work, our dream has come true: We finally have a spacecraft,” said SpaceIL CEO Ido Anteby in a release issued by the company. “Shipping the spacecraft to the United States is the first stage of a complicated and historic journey to the moon. This is the first of many exciting moments, as we look forward to the forthcoming launch in Cape Canaveral.”

Joining Beresheet as a rideshare is the S5 satellite, built by Blue Canyon Technologies for the U.S. Air Force Research Lab (USAFRL).

All three passengers are destined for different orbits.

Beresheet will be the first to deploy, bound for a low-energy, multi-month path to the lunar surface. Meanwhile, S5 will remain attached to PSN 6, but will detach from its host before the larger spacecraft reaches it final geosynchronous position.

“This is an important mission for Spaceflight as we expand and evolve our customer offerings,” said Spaceflight CEO Curt Blake in a press release issued by the company. “The launches we pursue continue to get more sophisticated and demonstrate that our expertise goes beyond identifying and scheduling launches. We also offer valuable integration and deployment services that enable our customers to reach space in a cost-effective manner and get to their desired orbit successfully. With this mission, Spaceflight is demonstrating that the Moon is in reach.”

Correction: An earlier version of this story stated the payloads would be released from a payload carrier. There is no payload carrier on this mission as Beresheet is attached to the top of PSN 6 and S5 will be deployed via a dispenser on the primary satellite.

There is no payload carrier for this flight. Beresheet is directly attached to PSN 6 and the AFRL S5 is deployed from a PODS dispenser on the PSN 6. The PSN 6 is mounted on the Falcon 9 upper stage.

Thank you for bringing that to our attention! The story has been corrected.