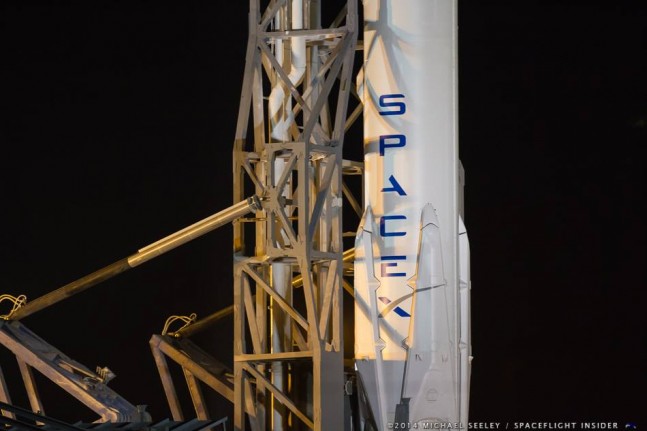 CAPE CANAVERAL, Fla — The fifth operational flight under NASA’s Commercial Resupply Services (CRS ) contract, carried out by SpaceX, will have to wait just a little longer before taking off into the early-morning skies. This was caused by an issue with the thrust vector control system, an actuator drift on the Falcon 9 v1.1’s second stage, which caused the terminal account to be cancelled just one minute and 21 seconds prior to the 6:20 a.m. EST launch time. The next launch attempt is currently set for 5:09 a.m. EST on Friday, Jan. 9. NASA’s George Diller stated that there would be no post-scrub press conference and SpaceX’s John Taylor stated that no further information was available at this time.

When the Falcon 9 v1.1 rocket and Dragon spacecraft duo do take to the skies, they will ferry some 5,200 lbs (2,539 kg) worth of cargo, crew supplies and experiments to the International Space Station. This flight will mark the fifth operational flight that the company will conduct under the $1.6 billion CRS contract that the Hawthorne, California-based company has with the space agency.

Some of the experiments that Dragon will provide a ride to station include the Cloud-Aerosol Transport System (CATS), the Self Assembly in Biology and Origin of Life (SABOL) and the Student Spaceflight Experiments Program (SSEP). SSEP is unique in that a version of the experiment was on the doomed Orbital Sciences Corporation Antares rocket when it exploded on Oct. 28, 2014.

If everything goes according to plan, SpaceX has a total of four flights to the space station scheduled to take place throughout 2015. The NewSpace firm also has a variety of commercial missions on its manifest as well

It did not “fizzle” it had an issue with an actuator.

It did not fly. It did not launch. It did not lift off. It did not work. It had an issue with doing what it was designed to do. It was screwed up. It broke. No workee. Dud.

Fizzle- to fail or end feebly especially after a promising start ~merriam-webster.com

The countdown fizzled for sure, the rocket however did not (never started). Nice article with a disagreeable title.

Yes, it fizzled. If you disagree you just contradicted yourself by displaying the definition as correct. Disagreeable is not the same as disagree I guess. Much like a hobby rocket is not a real rocket meant to accomplish anything so it can repeatedly fail and still be applauded. This is of course the second time it has fizzled so the title could have been much more disparaging.

I guess your admitting that the “Hobby rocket” has had a promising start. yay. Tho I still think the title was just a tad out of place, didn’t really fit with the article IMO. But who cares, I just hope all goes well on this launch.

Considering all of the favorable reporting SpaceFlightInsider and Jason have given SpaceX, including coverage of the “epic” Christmas party, Musk devotees need to grow a thicker skin and cut Jason some slack. There are plenty of SpaceX cheerleading sites that consider the “fizzle” a “tremendous success” in terms of the exercise of judgment by SpaceX.

All I want is a successful resupply, period.