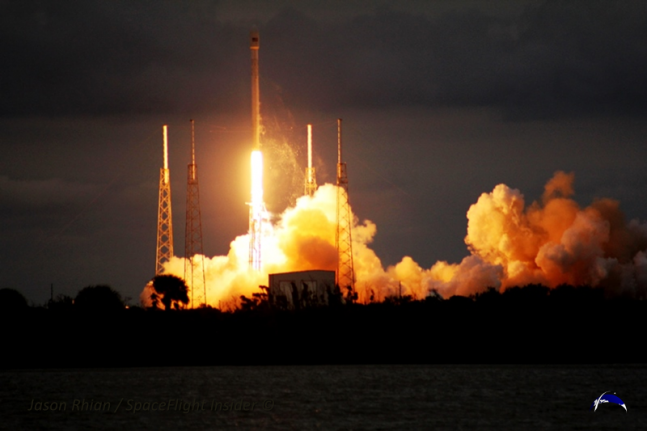 Several statements have been made by SpaceX about the Falcon 9 launch vehicle - but how accurate are they? Photo Credit: Jason Rhian / SpaceFlight Insider

CAPE CANAVERAL, Fla – Everyone wants to promote their brand, to highlight the good work done by the organization they represent. However, when one is talking about spaceflight? It is vital that one acknowledges the accomplishments of the past. SpaceX’s CEO and Founder, Elon Musk made some statements recently, that, upon reflection have caught the attention of SpaceFlight Insider’s “fact-checker.” The Falcon 9 v1.1 which carried out the SpaceX-3 mission did carry out a successful soft landing – but it was not the first or even second rocket to do so. Photo Credit: Jason Rhian / SpaceFlight Insider

There can be no arguing that Space Exploration Technologies (SpaceX) has made incredible progress in making its Falcon 9 launch vehicle one of the most versatile and reliable launch vehicles currently in production. Recently, the rocket even conducted a safe landing in the Atlantic Ocean. But is this capability new or revolutionary? During a press conference held on April 25 at a meeting of the National Press Club Musk stated the following:

“It’s a really huge milestone for SpaceX and certainly for the space industry. No one has ever soft-landed a liquid rocket boost stage before.”

While it is true that SpaceX’s Grasshopper as well as a modified version of the company’s Falcon 9 (dubbed the Falcon 9-R) first stage have demonstrated the ability to hover in midair -neither they, nor the first stage which carried out a soft landing in the Atlantic after delivering the Dragon spacecraft to orbit on SpaceX-3 – were the first to do. In fact, they were not even second.

Known as the Delta Clipper or DC-X, McDonnell-Douglas, demonstrated the capability to launch, fly horizontal – and then safely land a vehicle. The DC-X flew test flights for some four years (between 1992 and 1996). Part of the Single-Stage-To-Orbit (SDIO) initiative, DC-X became known as DC-XA when it changed hands from McDonnell-Douglas to NASA in 1996. In that year, the DC-XA while completing a landing after a test flight had one of its landing gear fail. The test article toppled over and caught fire. NASA, perhaps under the directive of the administration at the time, opted to cancel the program – despite its successful nature and relatively low cost for a replacement vehicle (Pete Conrad, Apollo Moonwalker and one of the personnel working on the project, estimated it at around $50 million) – the program was not renewed.

More recently, fellow NewSpace company Blue Origin has launched its New Shepard vertical-takeoff, vertical-landing suborbital rocket. Although Blue Origin has been more-than-a-little secretive, the test article has conducted flights in 2011 – the year prior to SpaceX’s first flight of the Grasshopper in September of 2012.

So, did SpaceX conduct the first soft-landing of a liquid-fueled booster? No. However, given the nature of the location in which the statement was given makes a verbal misstep, or forgetting the history involved with this technology perfectly understandable. SpaceX can however, rack up the first use of this type of technology during an actual mission. A fact which was highlighted by one industry insider.

“What SpaceX has done with its innovative use of technology on the Falcon 9 first stage is laudable. This is something that could really lower the cost of space transportation.  It is the first application of such technology on an operational vehicle.”, said former NASA Administrator Michael Griffin during a recent interview. “However, it is not actually the first soft-landing of a liquid-fueled rocket. Elon’s successful test was preceded by the 1992 test flights of the DC-X, and also by Blue Origin’s New Shepard vehicle.”

SpaceX has been testing grasshopper for years. They predate Blue Origin.

Blue Origin’s New Shepard first flew in June of 2011 – Grasshopper’s first flight was in September of 2012. Sorry, not only is your statement inaccurate – it exaggerates the length of time since the first Grasshopper flight (1 year & 7 months ago – not “years”). Please don’t “correct” others with false or misleading statements. That can be construed as lying – something which could get you banned from posting further comments.

You can nitpick all you want. The Grasshopper was a modified 1st stage booster that of the type (i.e. not the Grasshopper itself) that DID launch spacecraft into space. When I say space, I’m not talking about going 60 miles up and then just free falling. I mean launching a satellite into orbit. Being operational. None of the other crafts that you mention have done that. They were test concepts and no more and I don’t even know if Blue Origin or DC-X ever did achieve an altitude that would be considered “spaceflight”. But the Falcon 9 first stage that the Grasshopper was based on was operational and the new test vehicles that they are using is based on the operational v1.1 first stage down to its landing gear. Much different than the examples that you provided.

Wait a minute. You can’t compare the safe landing of the F9 in the Atlantic Ocean with DC-X or Blue Origin because the F9 sent a Dragon capsule in orbit.

To all highlighting the differences between DC-X / New Shepard – we closed to article with the following:

So, did SpaceX conduct the first soft-landing of a liquid-fueled booster? No. However, given the nature of the location in which the statement was given makes a verbal misstep, or forgetting the history involved with this technology perfectly understandable. SpaceX can however, rack up the first use of this type of technology during an actual mission. A fact which was highlighted by one industry insider.

“What SpaceX has done with its innovative use of technology on the Falcon 9 first stage is laudable. This is something that could really lower the cost of space transportation. It is the first application of such technology on an operational vehicle.”, said former NASA Administrator Michael Griffin during a recent interview. “However, it is not actually the first soft-landing of a liquid-fueled rocket. Elon’s successful test was preceded by the 1992 test flights of the DC-X, and also by Blue Origin’s New Shepard vehicle.”

When fact-checking, precision is important. Elon said, “No one has ever soft-landed a liquid rocket boost stage before.” In rocketry parlance, a boost stage is typically the first stage of a multi-stage rocket-powered vehicle (sometimes it’s a strap-on that first in parallel with the vehicle’s first stage, but is discarded while the first stage is still firing). So the Falcon-9’s first stage is a boost stage — not only does it have to launch and then slow down and land, it also has to carry a whole stack (second stage plus Dragon spacecraft) on top of it, and release it safely (hardly a trivial capability). Neither DC-X nor Blue Origin’s New Shepard is a “boost stage” — they are complete vehicles, not carrying another stage on top of them. So, Elon was being precise in what he said; AFAIK, he is precisely correct, this is the first boost-stage I know of that anyone has attempted, to have this capability (awesome!). And, I’m quite sure that Elon is very aware of DC-X and New Shepard, and was not trying to pretend they didn’t exist, hence his precision in wording.

What Elon said was 100% true. The other landings were tests (including Grasshopper)and not on production vehicles lifting real payloads. F9-R (while still a test) was part of a real mission and so was the fist vehicle to actually do it, not just test it.