Eutelsat 115 and ABS 3A ready for historic flight on SpaceX Falcon 9 v.1.1 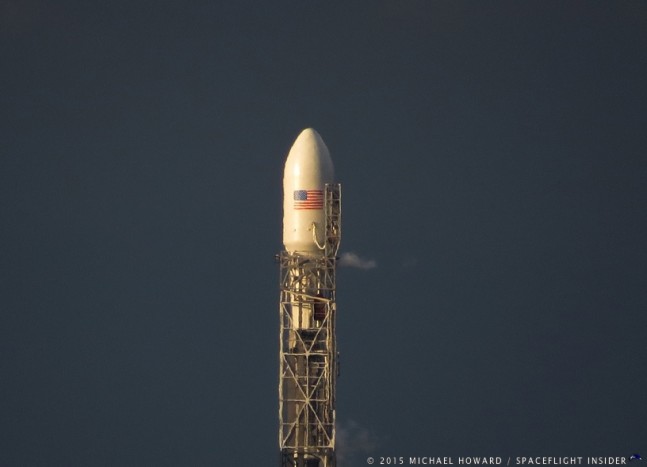 CAPE CANAVERAL, Fla – SpaceX’s ‘big year,’ is set for yet another important chapter with the upcoming launch of what has been dubbed the ABS/EUTELSAT-1  mission as it will see two communications satellites, EUTELSAT 115 West B (also known as Satmex 7) and the Asia Broadcast Satellite (ABS 3A), roar off the pad and into orbit. If everything goes as advertised, it will mark the first time that SpaceX has launched two satellites into orbit – on a single flight.

Tomorrow’s planned launch is currently scheduled to take place at 10:49 EST (349 GMT on March 2) on Sunday, March 1. If everything goes according to plan, it will mark the third flight of the year for the Hawthorne, California-based aerospace company, as well as a possible uptick in the amount of launches that the NewSpace firm has demonstrated it is capable of carrying out. The ABS 3A satellite will connect the Americas, Europe, the Middle-East and Africa via three C-Band and four Ku-Band beams. (Archive image of ABS 2 spacecraft). Photo Credit: ABS

EUTELSAT 115 West B will be placed into an orbital position of 114.9° West where it will serve to extend coverage from as far north as Alaska and Canada, all the way down to South America. Eutelsat’s website also notes that the satellite will provide “unique” coverage to the Galapagos and Easter Island.

The latest spacecraft in Eutelsat’s fleet is designed to provide greater capacity to reach markets that already have, or are projected to have increased growth in terms of data, video, mobility and government uses across the Americas. The spacecraft was built by  Boeing Defense and Space and will be the first all-electric satellite that Eutelsat will have on orbit. It has been produced to help decrease the amount of mass that the booster will be required to send aloft.

EUTELSAT 115 West B will provide Ku-band resources via three fixed beams which will cover the region from the State of Alaska to Patagonia. The spacecraft has 12 C-Band and 34 Ku-Band transponders. It is hoped that the satellite will advance coverage across a region that covers all the way from Canada down to South America.

The services that the satellite will provide to private, commercial and government customers, according to Eutelsat, include video services which include occasional use Direct to Home (DTH) and DTT (Digital Terrestrial Television). A semi-hemispheric C-band beam will provide coverage that is meant to be optimized so as to provide services such as cellular, video, distribution and mobility.

Eutelsat believes that these services will be of particular interest to: “ISPs, aeronautical, maritime, oil & gas, telecom operators and government agencies, as well as news, sports & entertainment broadcasters.”

By comparison, ABS 3A will be located at 3 degrees West and will connect the Americas, Europe, Africa as well as the Middle East via C and Ku-band coverage. It will carry this out in a similar fashion to that of EUTELSAT 115 West B — by three C-band beams as well as a global beam. The ABS/Eutelsat-1 mission will mark the first time that SpaceX will attempt to launch two satellites on a single rocket. Photo Credit: Eutelsat

ABS 3A will also have four Ku-band beams that will cover Europe, South Africa and across the Americas. It will be capable of supporting VSAT services, providing TV services, to include distribution, IP trunking, cellular backhaul and maritime services. Like the other spacecraft that will hitch a ride uphill via the Falcon 9, ABS 3A is a Boeing satellite, it too is an all-electric propulsion spacecraft, based off of the 702SP design.

The ABS 3A spacecraft will have 24 transponders which transmit at a bandwidth of 72 MHz.

Both of the satellites should be deployed about 30 minutes after liftoff.

Tomorrow’s launch will mark the 16th flight of a Falcon 9 (both the V1.0 and V1.1) booster. Fifteen of the rockets have launched from Cape Canaveral, with the remainder lifting off from Vandenberg.

If SpaceX can get the Falcon 9 v1.1 with its payload of the two comm sats into the skies Sunday night, they will still have much more on their plate for the remainder of 2015. Including two scheduled abort tests — SpaceX has as many as 15 flights on its manifest for 2015. This could include the first flight of the heavy version of its Falcon booster, an in-flight and pad abort for the firm’s Dragon spacecraft (being conducted in the lead up to the first flights of astronauts under NASA’s Commercial Crew Program).

This year could also see a return of flights from SpaceX’s facilities located at Space Launch Complex 4E in Vandenberg Air Force Base in California. In fact, there is the possibility as many as three Falcon 9’s could take to the Californian skies. If SpaceX can carry out the launch tomorrow evening, it will mean that the company will have carried out three launches in a period of two months. Photo Credit: Jared Haworth / SpaceFlight Insider

Their cadence has been picking up this year. Even with the delay in launching the last Dragon. As far as pad 39A goes, ULA/Blue Origin’s last minute bid for the pad was, in my opinion to slow down SpaceX’s construction at the pad cause delays to their schedule.