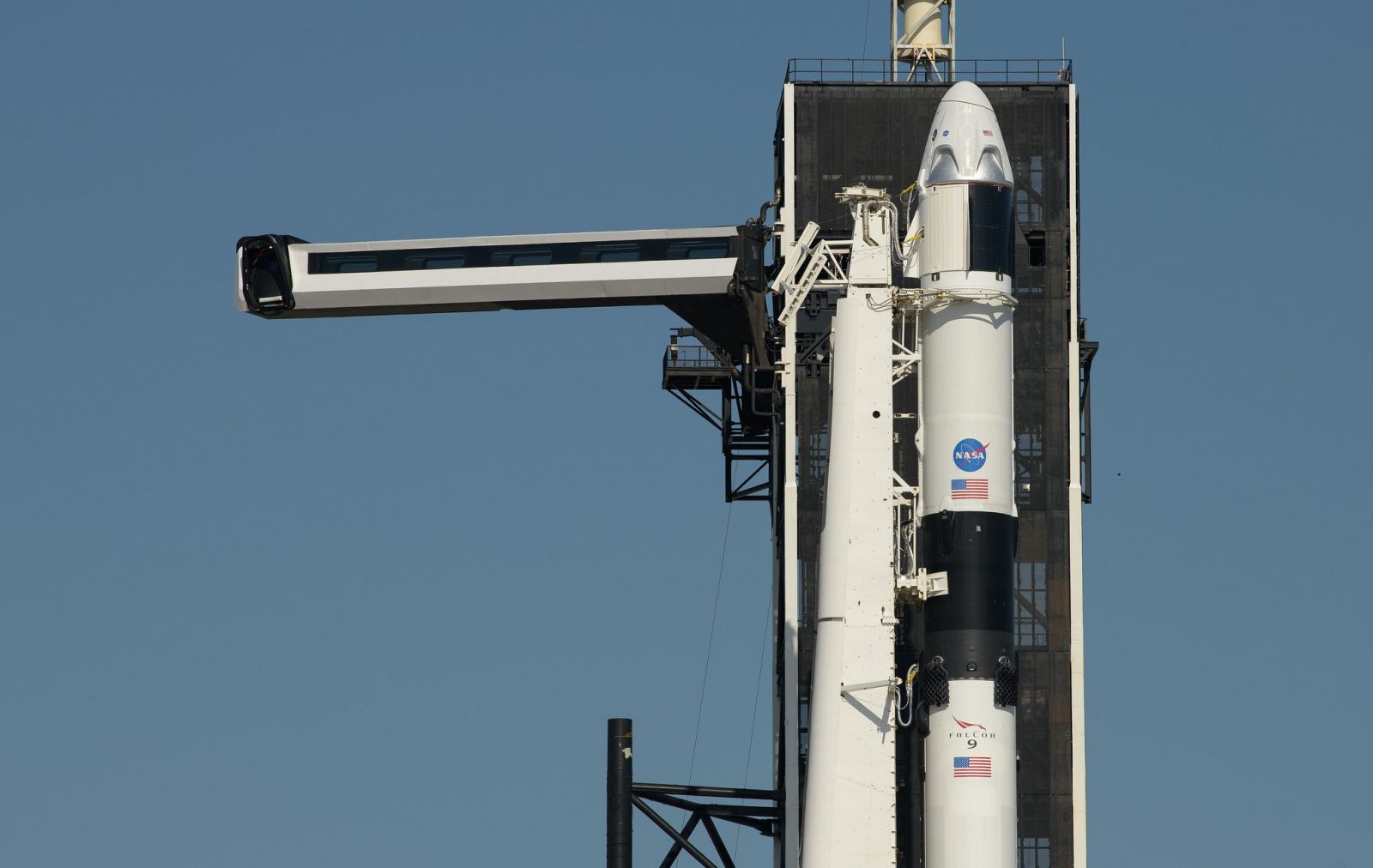 Mission managers at NASA and SpaceX collectively gave the green light to move forward with the Demo-2 mission to the International Space Station. Photo Credit: NASA

NASA and SpaceX today completed the Launch Readiness Review for Demo-2, the next step in marching towards a May 27, 2020 planned launch date.

As America waits with nearly nine years’ worth of anticipation, NASA and SpaceX teams have been working diligently checking systems and subsystems making sure that Falcon 9 and Dragon are ready to safely fly on Wednesday. On Friday, the team finished the Flight Readiness Review (FRR), giving the first major “go for launch” before Wednesday’s attempt. Monday, the Launch Readiness Review (LRR) was completed. Several technical milestones have been achieved in preparation for the greatly anticipated flight, including a dry dress rehearsal which occurred over the weekend. Speaking during a media call following the LRR, NASA’s manager of the Commercial Crew Program, Kathy Lueders, commented that she felt moved during the dry dress rehearsal, watching the suited astronauts get into their transport vehicles and driving out to the launch pad, realizing that the next time that happens (they) would be getting ready to launch.  Today’s conclusion of the Launch Readiness Review confirms that both the NASA and SpaceX teams feel comfortable and assured that the launch vehicle and her crew are safe and ready to fly. 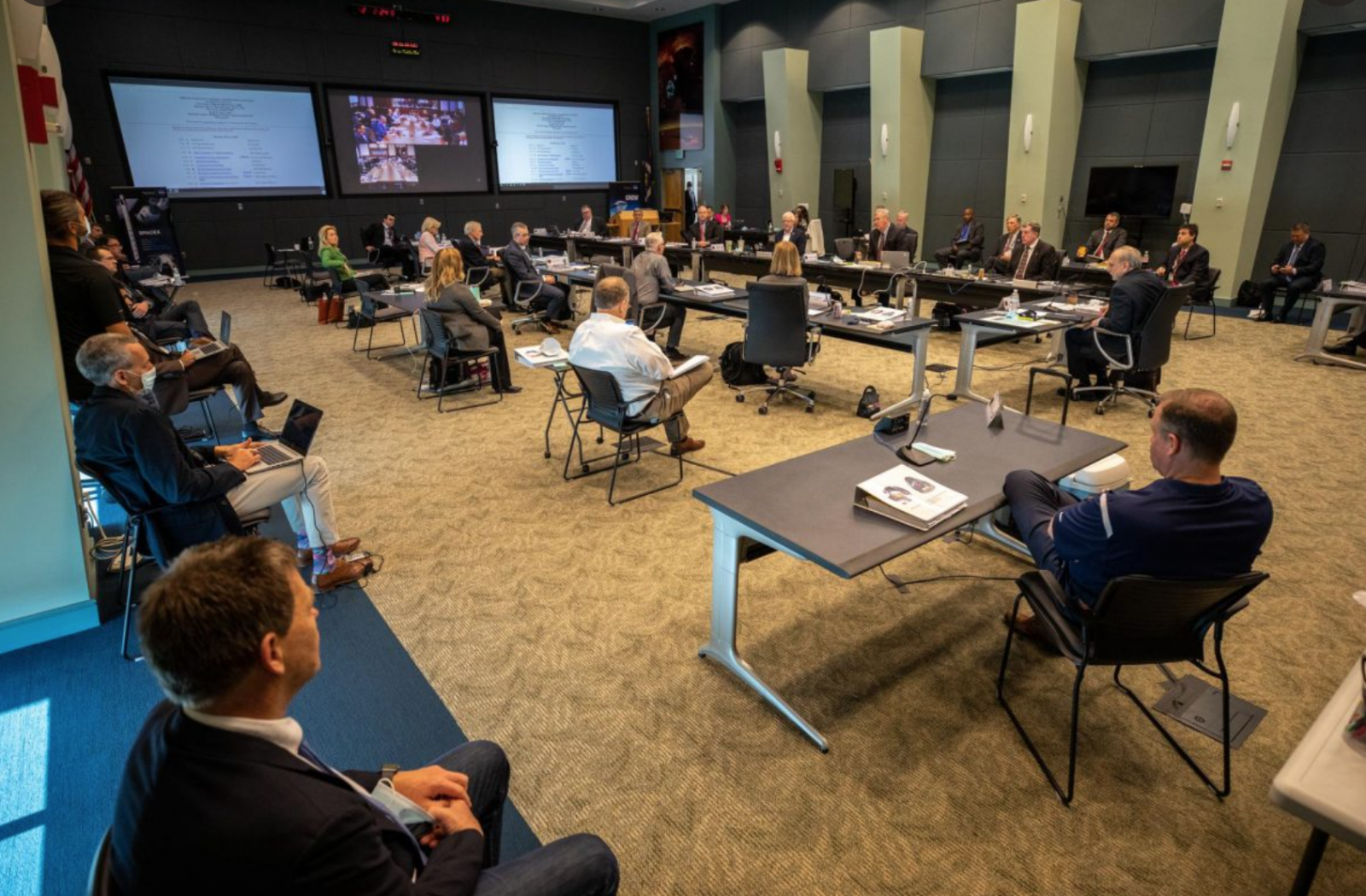 Mission managers from SpaceX and NASA are seen here, gathered for day two of the Flight Readiness Review for the upcoming Demonstration-2 mission flight, set to fly on May 27. Credit: NASA

Originally scheduled to finish on Thursday, the FRR spanned a total of two days, which isn’t completely unexpected as this is the first time NASA has launched its astronauts on a vehicle provided by a private company. Flight Readiness Reviews have been crucial for crewed spaceflight since the Space Shuttle era. NASA Administrator Jim Bridenstine mentioned the difficulty of some of these conversations as he alluded to several debates about many of the elements discussed during the FRR and LRR. However, these discussions are critical and necessary to all but guarantee a safe flight. Historically, FRR/LRR discussions have been known to be very thorough and honest. The FRR culminates a long, outstanding partnership between SpaceX and NASA. “It didn’t just start with this review,” Norm Knight, deputy director of Johnson Space Center Flight Operations said, “It was really a journey of friendship and partnership with SpaceX that started many years ago.” While many checkouts and reviews were completed during the reviews, one of the biggest analyses was the probability of a loss of Crew event, which is determined to be less than 1 in 270. The confirmation of this stringent safety standard confirms that Crew Dragon is statistically much safer than Shuttle. 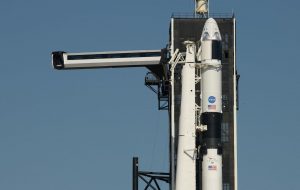 After being encouraged on the call by Lueders to arrange favorable weather for launch day, McAleenan chuckled and quipped that the 45th Weather Squadron was in the weather sales business, not production. As he outlined the various weather systems and fronts which are collectively contributing to the currently 40% chance that there would be a violation against the launch weather criteria, his choice of words to summarize the situation seemed fitting, given that he was talking about a mission featuring two astronauts, named Bob (Behnken) and Doug (Hurley). 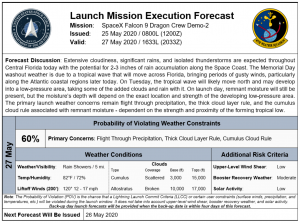 By referring to the guidance from the weather models as being a “strange brew”, McAleenan perhaps inadvertently and unintentionally (but pop-culture points to him if it was planned) gave a subtle nod to the many comical memes which have sprung up in the past weeks, referencing the title of the 1983 cult-classic Canadian comedy film, “Strange Brew”. The full name of the popular film, starring Dave Thomas and Rick Moranis as a pair of fictitious Canadian brothers, is “The Adventures of Bob & Doug McKenzie: Strange Brew”. Paraphrased in the infamous words of Bob & Doug McKenzie, the Demo-2 Launch Readiness Review panel’s message regarding NASA’s and SpaceX’s plans for Wednesday were clear: they are planning to “Take off, eh!”

Report by Cullen Desforges, with contribution from Sean Costello

Well guess what. SpaceX is going to fly people to orbit and the ISS using their ‘hobby rocket’.
Where are all the naysayers now? Perhaps at home eating their humble pie.
Would be gratifying to have then own up to being completely wrong about SpaceX and to acknowledge them as a serious space vehicle construction and launch company.
Let’s face facts. They are about to create history, again.
All the very best to them and NASA without whom they could not have made the progress they have and as EM has consistently stated ‘saved their bacon’. back in the days of F1.
Cheers
Neil