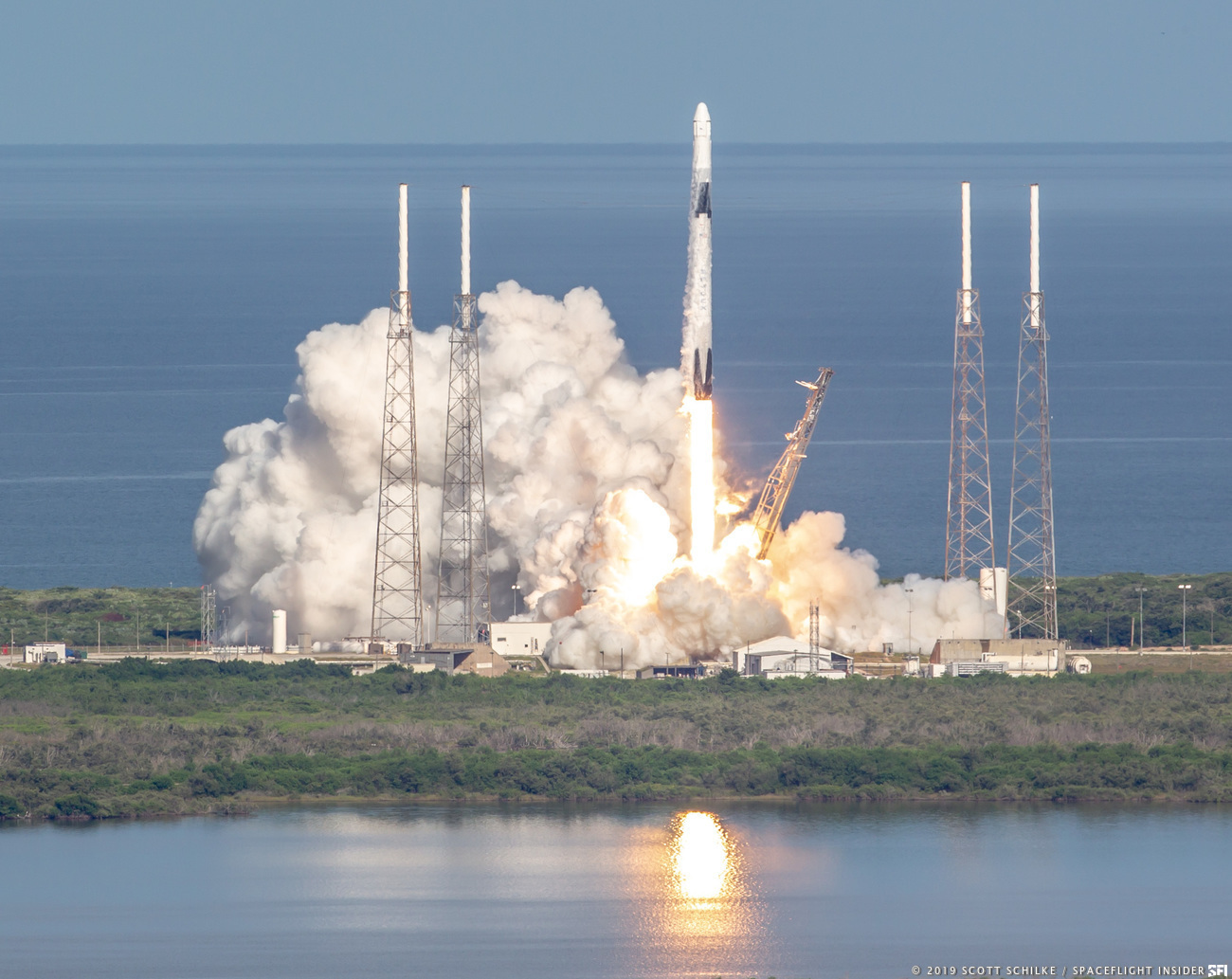 CAPE CANAVERAL, Fla. — The Expedition 60 crew on board the International Space Station can expect to get some fresh supplies, needed hardware and – slime – in the next few days. This odd payload mix was sent on its way thanks to two venerable pieces of space hardware which were brought to bear by the NewSpace titan – SpaceX.

On Thursday July 25, 2019, at 6:01 p.m. EDT (22:01 UTC) CRS-18 lifted off from Space Launch Complex- 40 (SLC-40) at Cape Canaveral Air Force Station in Florida, despite ominous threats of weather that could have scrubbed the launch. The liftoff marked the company’s eighteenth flight to the International Space Station as part of NASA’s Commercial Resupply Service. 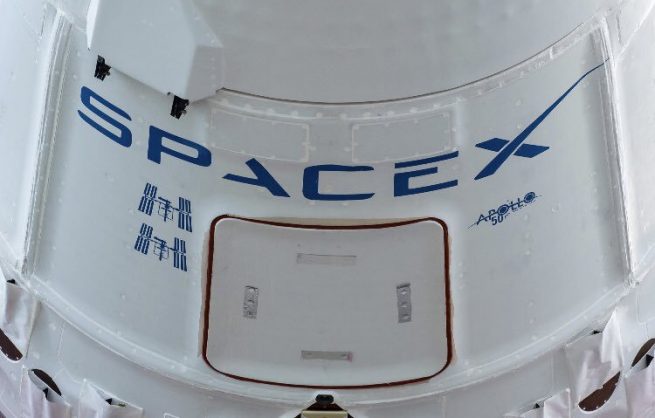 The CRS-18 Cargo Dragon bore the logo of the Apollo 11 50th Anniversary which was commemorated on July 24. Photo Credit: NASA / SpaceX

The flight was originally scheduled for a NET date of July 21. However, for reasons unknown, the flight was delayed by a day to July 22. Following the announcement of the delay, SpaceX completed a successful static fire test of the Falcon 9’s nine Merlin engines on Friday, July 19. It was then announced that the launch would occur no earlier than Wednesday, July 24, however, the lingering remnants of Tropical Depression 3 created a weather violation approximately thirty seconds before Falcon 9 was scheduled to take flight.

When the day finally came for a successful attempt by the Hawthorn-based company, the weather forecasts called for a 50% chance of conditions favoring a successful launch attempt. However, despite the ominous outlook, Thursday’s launch proceeded like clockwork.

At T-minus 38 minutes, the launch director gave the go for propellant load, followed by the subsequent loading of liquid oxygen and kerosene to the first stage approximately three minutes later. At 16 minutes to launch, the vehicle’s second stage was loaded with liquid oxygen. The vehicle transitioned to its own power at t-minus 7 minutes and 58 seconds to launch, followed by the vehicle’s pre-launch engine chill just about a minute later. At 60 seconds, the Launch Director gave the final go for launch. The nine first-stage Merlin engines roared to life at three seconds to launch. At T-zero, Falcon 9 spread its wings, clearing the launch tower carrying over 5,500 lbs of research and supplies to the international outpost. 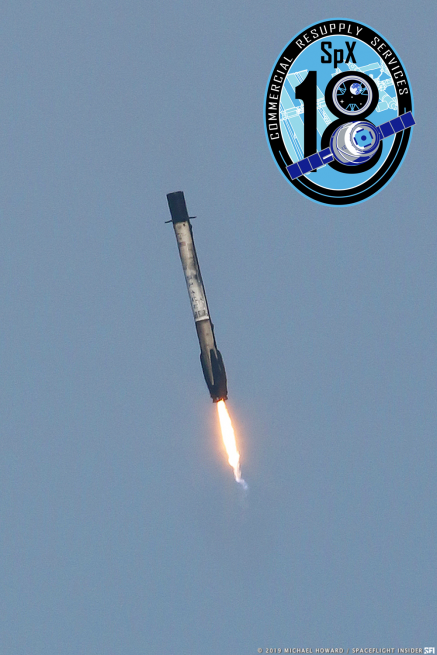 While this might have been the eighteenth mission to the ISS under NASA’s Commercial Resupply Services contract, it was the 44th time the California company landed a Falcon 9 first stage. Photo Credit: Mike Howard / SpaceFlight Insider

The primary mission of delivering Dragon to orbit continued without a hitch, separating from the second stage just over 9 minutes after liftoff. The spacecraft deployed its solar array “wings” at 12 minutes and six seconds after liftoff. A little over two hours later, Dragon opened its Guidance, Navigation and Control Bay doors.

On Saturday July 27, Dragon is expected to dock to the International Space Station via the Unity Berthing Port, delivering 5,500 lbs of scientific research supplies to aid in the experiments that are slated to take place as part of Expedition 60, and for future expeditions to Station. In addition to scientific supplies, Dragon is also slated to carry aboard supplies for the crews of Expedition 60 and beyond. CRS-18 is the third flight of this particular Dragon capsule.

Some of the scientific hardware onboard Dragon include a myriad of different experiments from a multitude of commercial service providers.

Bionetics and the Dover Lifesciences have provided the Microgravity Crystallization of Glycogen Synthase-Glycogenin Protein Complex Experiment. This experiment will allow for the growth of protein crystals in a micro-gravity environment, which is expected to yield larger crystals than those found in and Earth environment, making them easier to study. This experiment is hoping to aid in the fight against obesity and cancer.

The University of Toledo is contributing the Microgravity Crystal Growth for Improvement experiment which aims at utilizing the microgravity environment to yield higher-quality crystals for three medical proteins similar to that of the experiment provided by Dover Lifesciences. 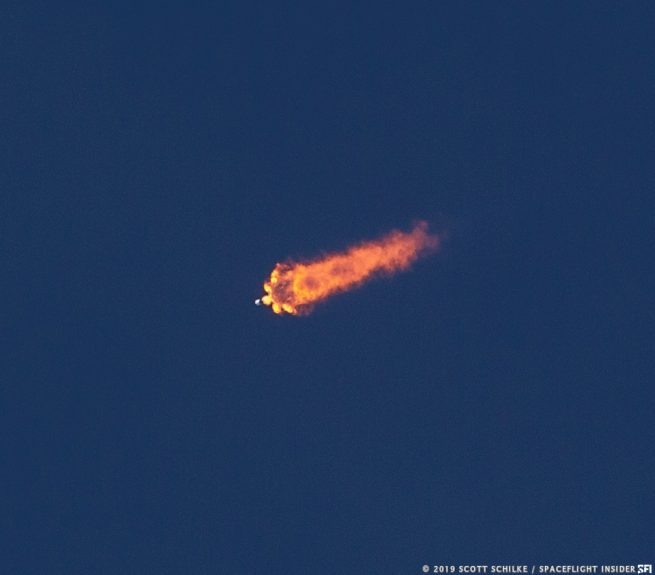 It has become a SpaceX trademark to reuse it’s equipment. Today continued this new tradition with the Falcon 9 conducting its second flight and the CRS-18 Cargo Dragon its third trip to the International Space Station. Photo Credit: Scott Schilke / SpaceFlight Insider

One of the more crucial experiments expected to be conducted thanks in part to Dragon’s delivery service will be from the University of California at San Diego which studies the effects of microgravity on human brain organoids. This experiment is crucial to aid in our understanding of the sustainability of the human brain during long-duration missions to the moon and deep space.

The ISS National Lab is expected to conduct its Rodent Research – 17 (RR-17) experiment, as Dragon is expected to deliver mice to the International Space Station in an attempt to study the effects of the microgravity environment on complex, living organisms. In this case, mice are the test subjects.

In the interest of providing public interest in human spaceflight, Nickelodeon has provided its famous green slime to test its viscosity, or resistance to flow, in the microgravity environment of the International Space Station. Nickelodeon will be filming a series of educational videos to demonstrate how the slime reacts to certain stressors, such as stirring or squeezing. The hope is to inspire the next generation of future scientists and engineers given Nickelodeons global audience.

In addition to the over 2-tons of scientific hardware being delivered, Dragon is also expected to bring aboard the International Docking Adapter – 3 (IDA-3) to the International Space Station. The installation of this adapter will be an historic moment for Station, as it will provide increased access for visiting vehicles, especially those being used for NASA’s Commercial Crew Program.

Dragon is expected to stay on orbit with the International Space Station for approximately four weeks. It will begin its de-orbit burn approximately ten minutes after undocking from Station, followed 30 minutes later by its reentry and splashdown just off the coast of Baja California. 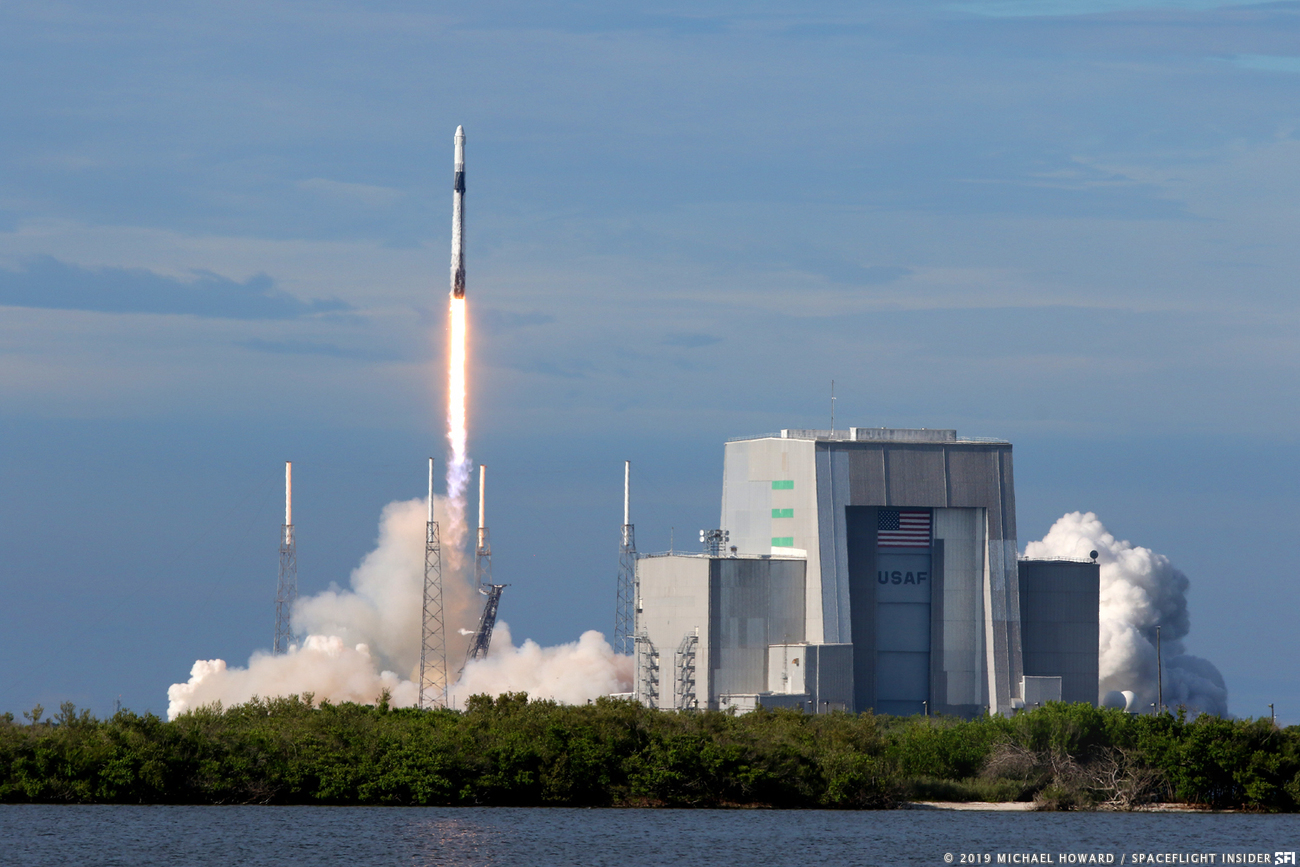