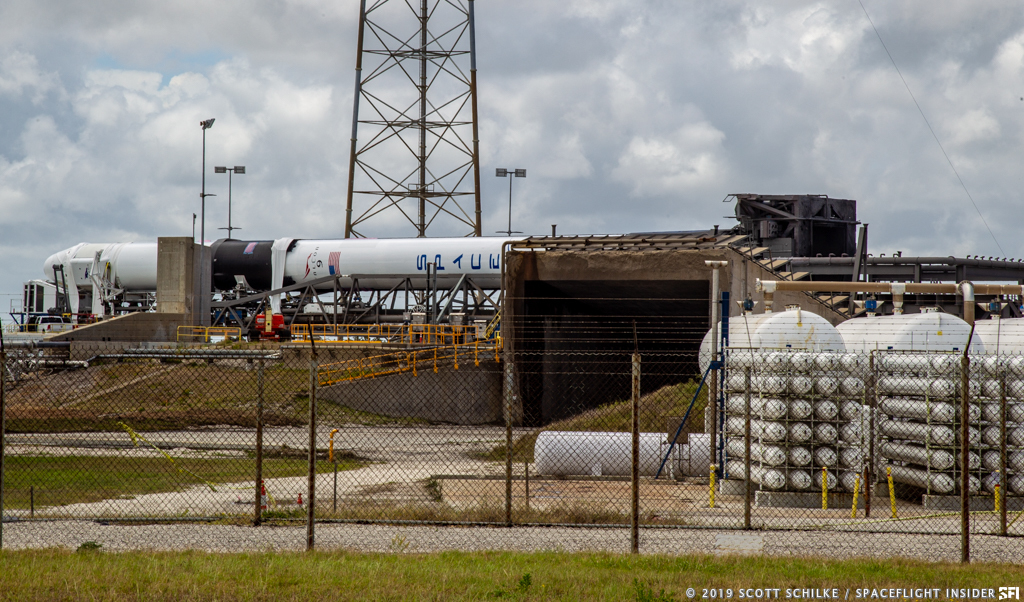 The Falcon 9 with CRS-17 before being raised to the vertical position in the hours before its May 3 launch attempt. Photo Credit: Scott Schilke / SpaceFlight Insider

While weather was the main concern for the May 3, 2019, Falcon 9 launch attempt, it was ultimately an issue with SpaceX’s drone ship, stationed about 17 miles (28 kilometers) off shore that prompted a “hold, hold, hold” call. However, there was also a helium leak on the ground side of the rocket that also needed to be addressed.

Standing down today due to an electrical issue on the Of Course I Still Love You droneship. Teams will also address the ground side helium leak before tomorrow's backup launch opportunity at 2:48 a.m. EDT, 6:48 UTC.

Initially, SpaceX was targeting May 1, 2019, for the flight of a Falcon 9 rocket with the CRS-17 Dragon spacecraft bound for the International Space Station, but a power failure aboard the outpost prompted a launch postponement to May 3 to give ground teams time to troubleshoot and replace the failed component, a Main Bus Switching Unit.

Flights to the International Space Station are timed for when the orbital plane of the outpost crosses the launch site. This effectively means there is no time to wait for better weather or to work technical issues as the window to get off the ground is essentially instantaneous.

With the scrub officially called at about 3 a.m. EDT (07:00 GMT), SpaceX teams are expected to attempt to solve the technical issues before trying again in about 24 hours. The next launch attempt is expected to be at 2:48 a.m. EDT (06:48 GMT) May 4.

The forecast is more favorable for the May 4 attempt with the 45th Weather Squadron predicting only a 30% chance of a weather-related rule violation.

Assuming a May 4 liftoff, Dragon should arrive at the outpost on May 6 and remain attached to the Harmony module until late May or the first part of June.