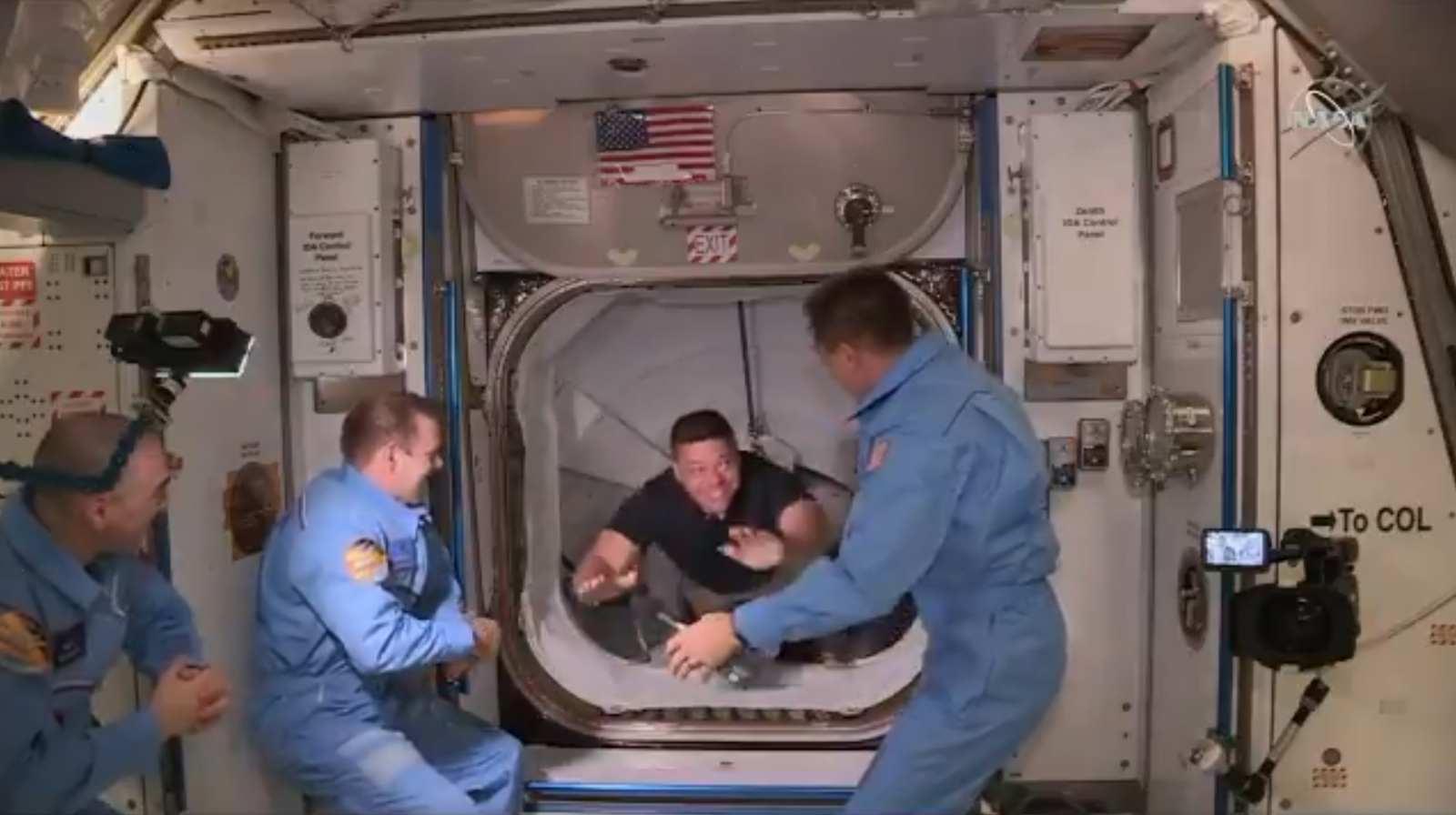 NASA astronaut Robert Behnken floats toward his colleague, Chris Cassidy, as he comes aboard the International Space Station. Behnken and his SpaceX Demo-2 crew-mate Douglas Hurley arrived on station as members of the first ever commercial crew. Credit: NASA TV

The Demo-2 Crew Dragon capsule, named Endeavour by its crew, docked with the forward port of the Harmony module at 10:16 a.m. EDT May 31, 2020, while the outpost was 421 kilometers over the northern border of China and Mongolia.

A couple hours later, the hatches between the two spacecraft were open and the Dragon crew and ISS crew greeted each other. It was the first crew arrival from the U.S. side of the ISS since the last space shuttle mission in 2011. 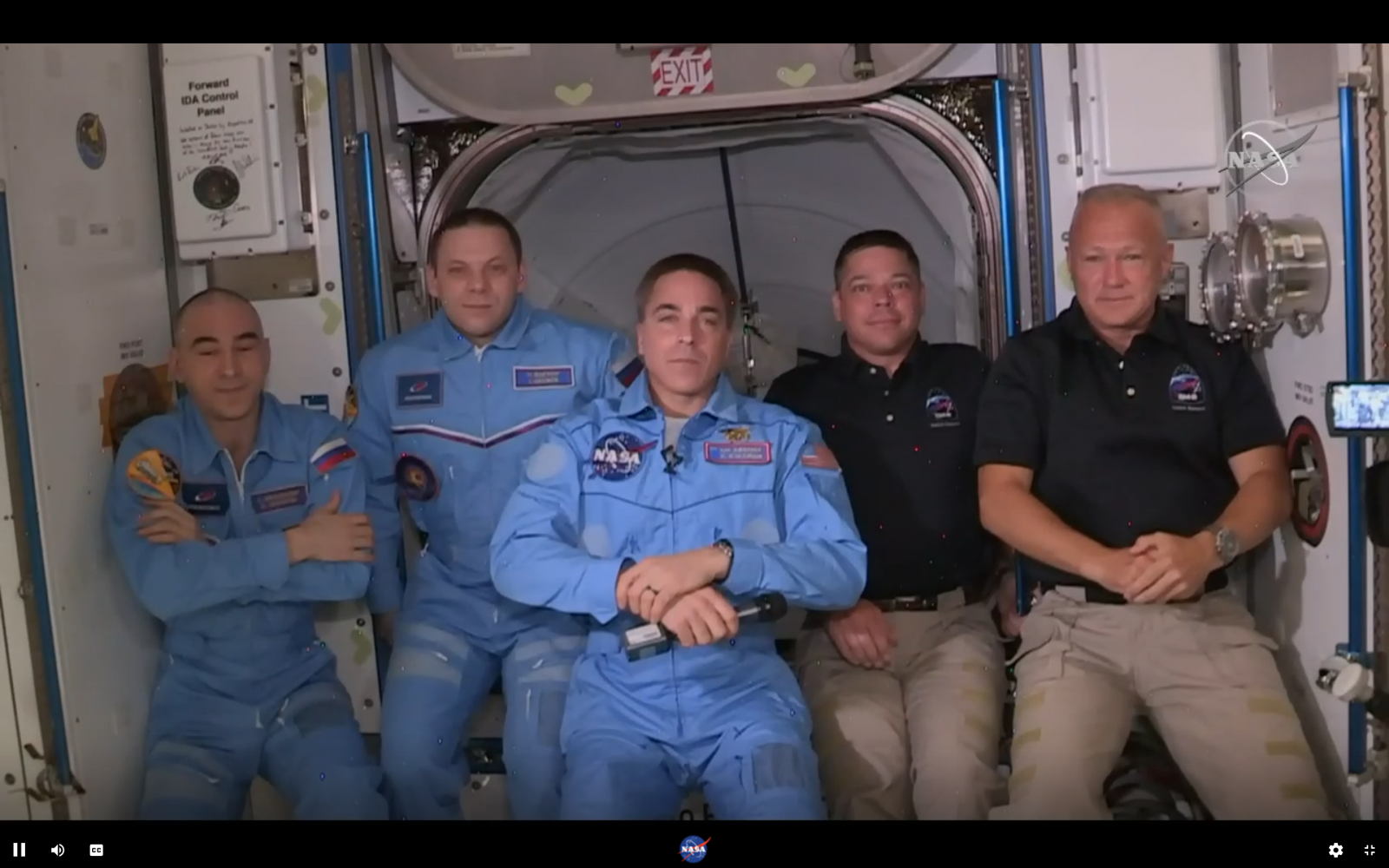 “It’s been our honor to be just a small part of this,” Hurley said during a media event soon after entering the ISS. “We have to give credit to SpaceX, the Commercial Crew Program and of course NASA. It’s great to get the United States back in the crewed launch business. We’re just really glad to be onboard this magnificent complex.”

Dragon’s rendezvous profile started soon after the vehicle got into orbit. Between orbital insertion and the beginning of proximity operations, there were five major burns to circularize the spacecraft’s orbit and begin chasing the ISS.

At about 8 a.m. EDT, the Approach Initiation burn was performed to begin moving closer to the ISS. There were three waypoints on the way to docking: waypoint 0, waypoint 1 and waypoint 2.

Waypoint 0 was located about 400 meters from the outpost and was passed by the Crew Dragon spacecraft with no issues. At waypoint 1, some 200 meters from the orbiting complex, the crew aboard commanded a hold so they could perform a manual piloting demonstration.

The demonstration included manually translating the vehicle in multiple directions to ensure the spacecraft could be taken over safely while close to the ISS. A similar demonstration was done shortly after reaching orbit, which also went as planned.

Once the piloting demo was completed, the crew commanded the computer to take over for the rest of the docking sequence. Crew Dragon then moved to waypoint 2, which was located at 20 meters from the docking port. This allowed for a final go/no-go poll for docking.

“SpaceX, Dragon on the big loop, we are inbound from approach two,” Hurley said once the spacecraft began moving toward the docking port for final approach.

About a minute later, the spacecraft docked with the international docking adapter on the forward end of the Harmony module.

The crew then spent the next couple hours pressurizing the vestibule between ISS and Dragon. From there, leak checks were performed.

Finally, at 2:03 p.m. EDT, the hatches were open. However, it would be about 20 minutes later before Hurley and Behnken entered ISS and were greeted by ISS Expedition 63 Commander Chris Cassidy, also a NASA astronaut. With him were his other two crew mates, Flight Engineers and Russian cosmonauts Anatoli Ivanishin and Ivan Vagner.

It was a momentous occasion. It marked the return of independent U.S. access to the space station, a capability that was lost in 2011 when space shuttle Atlantis left at the end of its STS-135 mission in July of that year.

Following initial greetings the crew all remained at the forward end of the Harmony module for a welcome ceremony, which saw several members of Congress and NASA leadership congratulate the crew.

The exact duration of the Demo-2 mission has not been set. It’s expected to be at the ISS for at least a month, but the spacecraft has the capability to stay until August or September before needing to return to Earth.

During the welcome ceremony, Johnson Space Center Director Mark Geyer jokingly asked Cassidy how he was going to ensure the Demo-2 stays longer.

“Well, we’ll slow down the rate at which I’m eating food so we can stretch out our consumables a little bit, but that’s a great question,” Cassidy said. “We’ll have to come up with some conniving scheme here in the next few days.”

In the coming weeks, however, there will be plenty of work for both crews to perform. This includes a series of spacewalks set to be performed by Cassidy and Behnken to install six lithium-ion batteries on the S6 truss segment, finishing a years-long process of replacing all the nickel-hydrogen batteries on the external truss of the ISS. The final set of batteries were brought to the ISS last week by the final Japanese HTV spacecraft, Kounotori 9.

Exactly when Demo-2 returns to Earth, however, is still a bit up in the air, so to speak.

In a perfect world, the Demo-2 mission will return about a month before the next Crew Dragon mission is slated to leave for the ISS, which is currently slated to be the Crew-1 mission carrying four astronauts to the ISS.

NASA managers have said they have penciled in Aug. 30 for the Crew-1 launch date, but that will depend on a number of factors including the final analysis of the Demo-2 mission following their splashdown in the Atlantic Ocean at the conclusion of their flight.

Either way, the gap in the United States’ independent access to the ISS is over. And, assuming testing continues to go well for the other Commercial Crew spacecraft in development — Boeing’s CST-100 Starliner — a second U.S. spacecraft will be sending crew to the outpost as early as the first half of 2021.