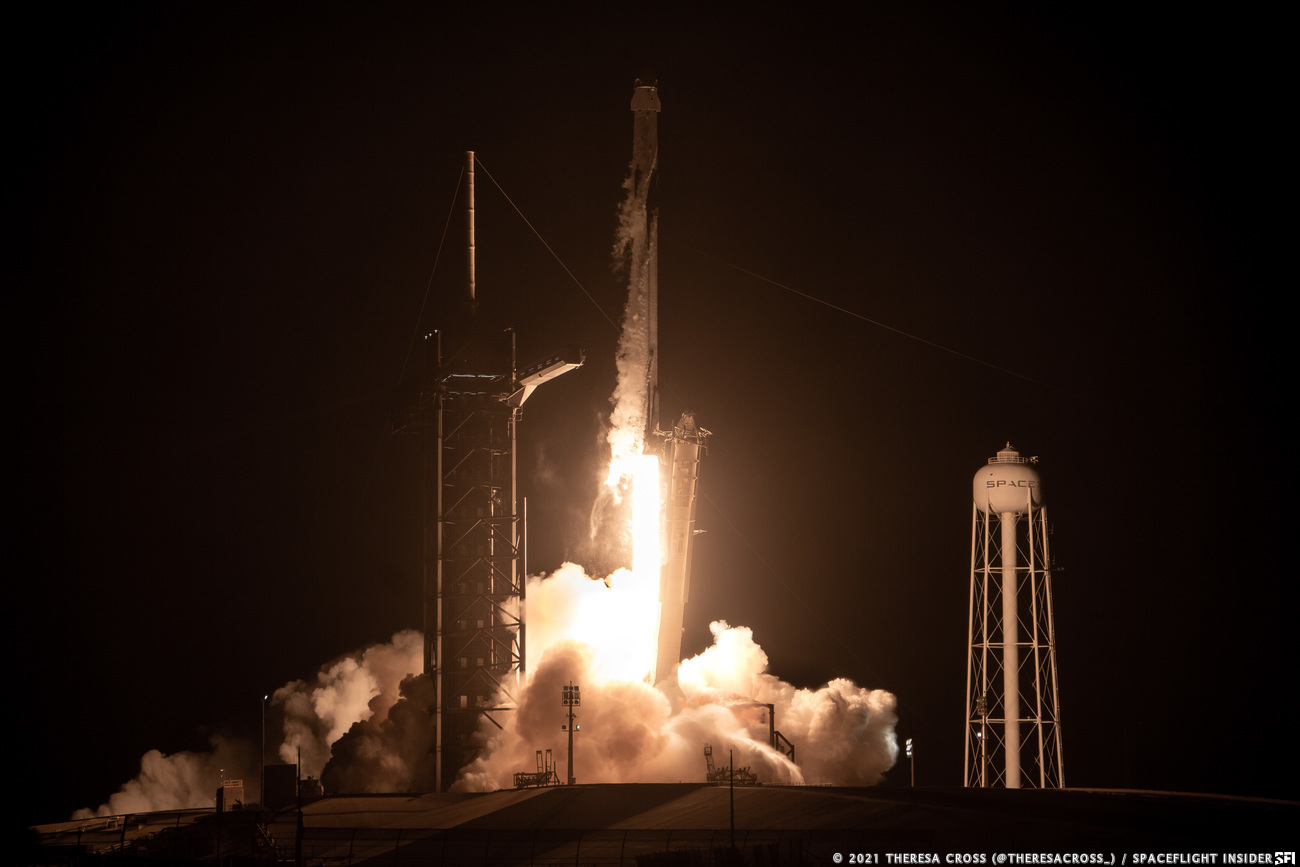 “It has been an incredible year for NASA and our Commercial Crew Program, with three crewed launches to the space station since last May,” said NASA Acting Administrator Steve Jurczyk in a NASA press release. “This is another important milestone for NASA, SpaceX, and our international partners at ESA and JAXA, and for the future of scientific research on board the space station. It will be an exciting moment to see our crews greet one another on station for our first crew handover under the Commercial Crew Program.” 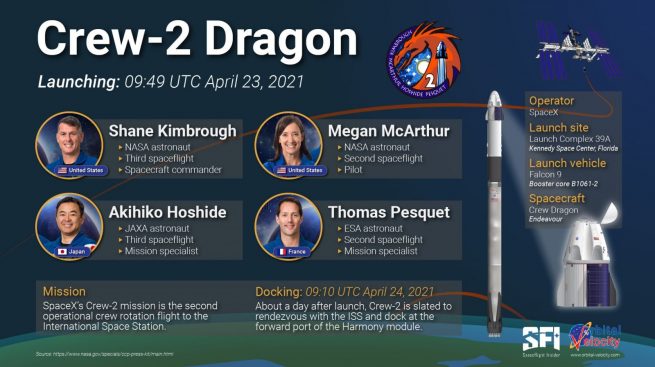 The Crew-2 mission has set a number of firsts: it is the first mission cleared by NASA to use previously-flown hardware, including Falcon 9 first stage 1061 and the Dragon capsule known as C206, Endeavour, which made its way to space a second time after use in the Demo-2 mission last summer.

Kimbrough, 53, is the commander of Crew-2. He’s on his third spaceflight. He first flew into orbit for the STS-126 space shuttle mission in November 2008. He also served aboard the ISS between October 2016 and April 2017 as part of the Expedition 49 and 50 crew.

49-year-old McArthur is on her second spaceflight. She first flew into space aboard space shuttle Atlantis in May 2009 for the final Hubble Space Telescope servicing mission, STS-125.

McArthur is the pilot for the Crew-2 mission and she is sitting in the same seat that her spouse, NASA astronaut Bob Behnken, sat in for the Demo-2 mission.

Hoshide, 52, is on his third spaceflight, having first flew into space aboard the STS-124 space shuttle mission in 2008 and then flying to the ISS for a five-month stay in November 2009 as part of Expedition 32 and 33.

Finally, 43-year-old Pesquet is on his second mission. He first flew into space aboard Soyuz MS-03 in November 2016 to spend seven months aboard the ISS for Expedition 50 and 51. 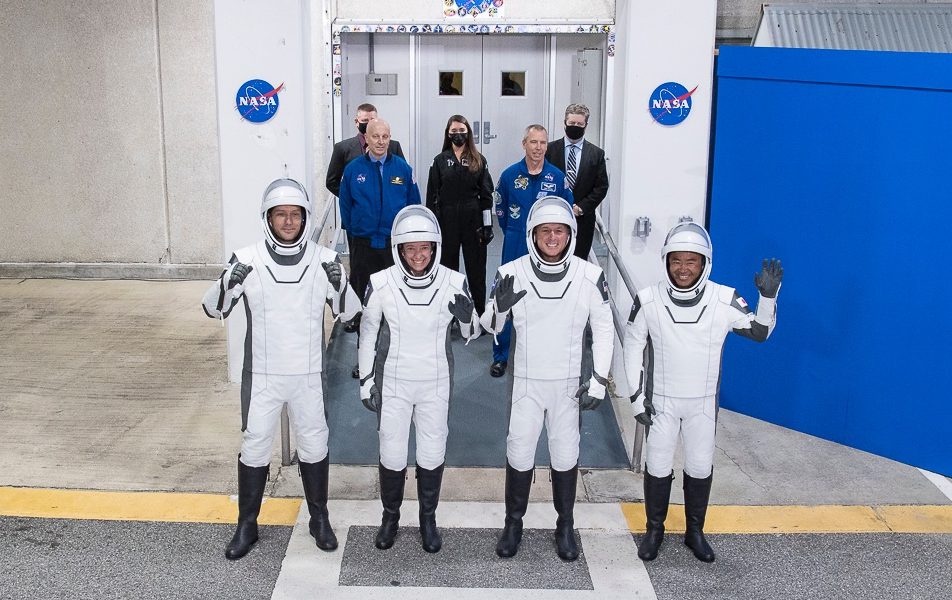 The Crew-2 astronauts moments after they left the Neil Armstrong Operations and Checkout Building to begin their trek to the launch pad. From left to right: Thomas Pesquet, Megan McArthur, Shane Kimbrough and Akihiko Hoshide. Credit: NASA

This marks the first time in over 20 years that astronauts from NASA, the ESA and JAXA have flown together on a mission. Hoshide and Pesquet are mission specialists for the Crew-2 flight.

Once the Falcon 9 left the pad in Florida, the first stage and its nine Merlin 1D engines fired for about 2.5 minutes before cutting off and separating from the second stage.

The second stage continued sending the Crew-2 Dragon and its four astronauts toward orbit. Meanwhile, the first stage continued on a suborbital trajectory and performed two burns to land on SpaceX’s drone ship “Of Course I Still Love You,” located several hundred miles downrange in the Atlantic Ocean. 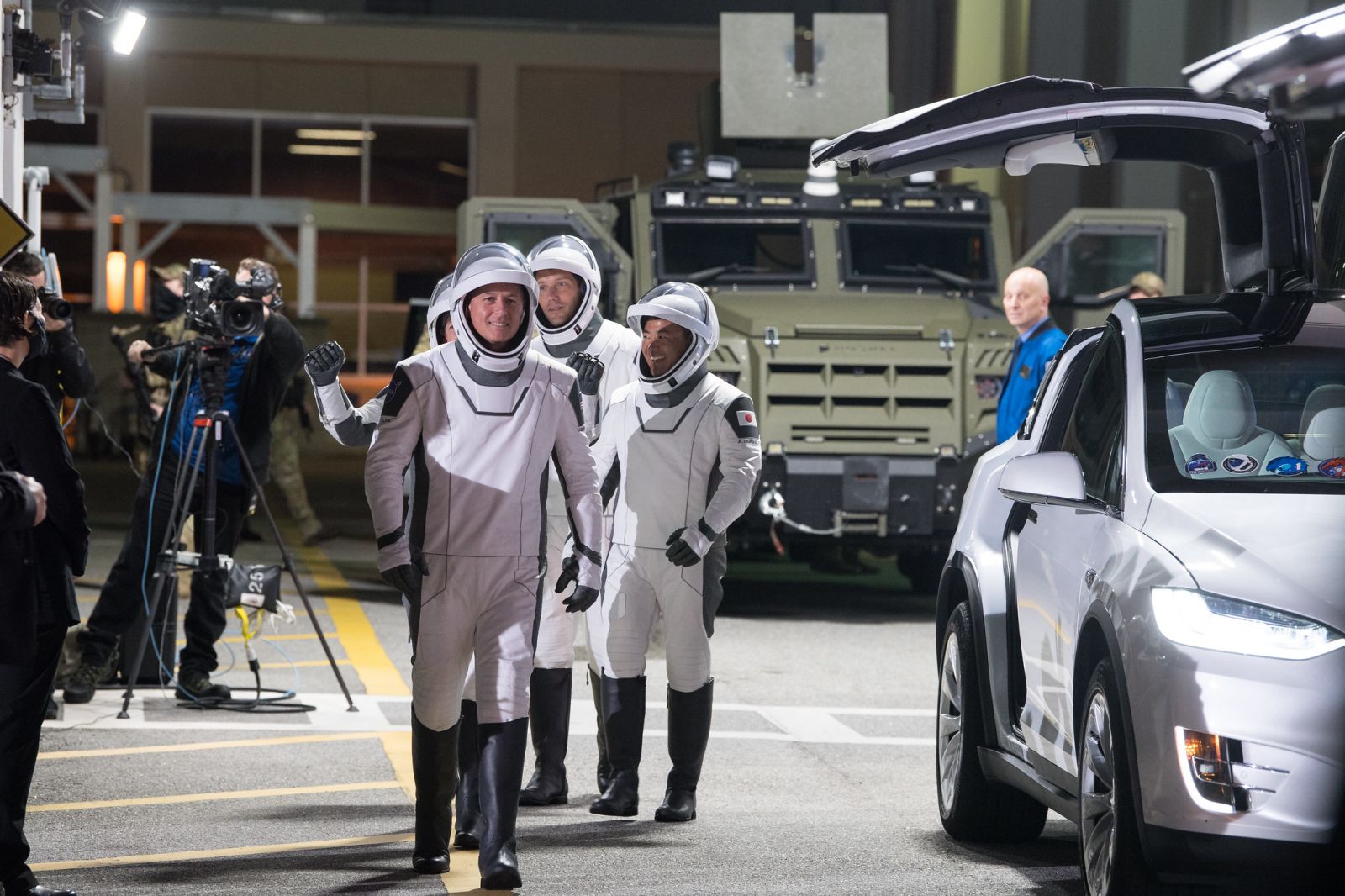 The Crew-2 astronauts board two Tesla Model X electric vehicles for their trip to the launch pad. Credit: NASA

Some nine minutes after liftoff, the second stage reached orbit and its lone Merlin Vacuum engine cut off. About two minutes later, the Crew-2 Dragon separated and began the process of catching up with the space station.

Crew-2 is the second in what are known as “post certification missions” by NASA. Once they arrive at the ISS, they’ll join the in-progress Expedition 65 crew, which includes four astronauts that launched to the outpost in November 2020 aboard the Crew-1 Dragon mission — NASA astronauts Mike Hopkins, Shannon Walker and Victor Glover and JAXA astronaut Soichi Noguchi — and two cosmonauts and an astronaut that launched earlier this month aboard Soyuz MS-18 — Russian cosmonauts Oleg Novitsky and Pyotr Dubrov and NASA’s Mark Vande Hei.

About a week after Crew-2 docks, the four Crew-1 astronauts will depart the ISS and begin their multi-hour journey back to Earth, culminating in a parachute-assisted splashdown off the coast of Florida. That’s currently slated for April 28.