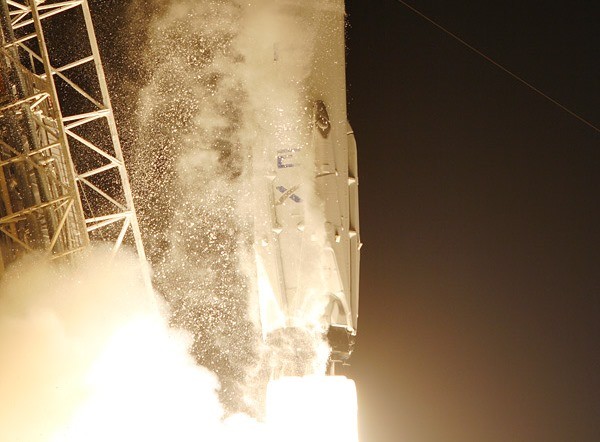 Looking at the 2015 flight calendar for Space Exploration Technologies (SpaceX ) shows a lot of activity for the year. The SpaceX launch manifest show no fewer than 15 launches on their docket. Included in the mix is a collection of never before attempted (for SpaceX anyway) orbits as well as the debut of the Falcon 9 Heavy launch vehicle. It is a lot of flights, in some cases barely two weeks separate flights. It marks an aggressive schedule but it is a realistic one?

Launch site preparation cannot begin until the previous rocket has left the pad. In the case of SpX-5, the delay from December to January meant the site crew could not start preparations for launch until Jan. 10. The company’s next launch is currently scheduled to take place 19 days later on Jan. 29 (NASA’s DSCVR mission). The launch team will be very busy getting everything ready for the next launch. And this is by no means the shortest time frame the site crew will have to work with. The prep window between the launch of the DSCVR mission and the Feb. 17 launch of a Falcon 9 v1.1, carrying an Asia Broadcast satellite (ABS 3A, Eutelsat 115 West B), will be complicated by the February (to be determined) launch date for the TürkmenÄlem satellite. If SpaceX chooses to fly the Turkmeni mission between those two, the best case scenario puts launch site preparations at just 9 days.

In the case of missions to the International Space Station (ISS ), the launch time is calculated down to the second to preserve as much fuel as possible for rendezvous with the orbiting laboratory. This is what is known as an instantaneous launch (technically, SpaceX has one second to get the Dragon spacecraft and Falcon 9 booster off the pad and into the sky).

When SpaceX has a delay to the countdown on these types of flights? It results in a scrub and they have to recycle the attempt for another day and time.

In the case of a more typical launch window, SpaceX can reset and launch again, sometimes within minutes (SpaceX has shown an aptitude for , should it be a simple issue on the launch pad. SpaceX has far more many launch windows with this sort of freedom scheduled for 2015. The aforementioned February launches fall into this latter category. That will give SpaceX a little breathing room for launch site issues that will pop up.

Overall, the question still remains: is this a realistic launch schedule? In 2014, SpaceX had six launches for the year (the ISS mission CRS-5 slipped into 2015), which marked a dramatic uptick in the amount of launches that the Hawthorne, California-based company has demonstrated they are capable of carrying out. Even with this increase, SpaceX, on average, has only demonstrated the capability of launching at the rate of 2.3 times a year. SpaceX has consistently issued initial launch manifests that were not fulfilled by the end of the year. Photo Credit: SpaceX

SpaceX also has four missions that will be launched from Vandenberg Air Force Base’s Space Launch Complex 4E, located in California. To date, SpaceX has only carried out one mission from its VAFB facilities, the Sept. 29, 2013 flight of the CASSIOPE mission on behalf of MacDonald, Dettwiler and Associates.

This new calendar has more than doubled the number of flights that SpaceX carried out in the past year. SpaceFlight Insider’s launch calendar has as many as 17 missions possible for the coming year. SpaceX has demonstrated the capability of carrying out approximately one-third to about half of the missions that appear on its initial launch manifest. Part of the potential cause for the lack of completing the full manifest – is the fact that the company is working to have a good portion of the Falcon 9 family of boosters be reusable.

This past week, on Jan. 10, SpaceX attempted to further this effort by having the first stage of the F9 booster that sent a SpX-5 Dragon spacecraft on its way to the space station – land on an automated drone ship placed 200 miles off the coast of Jacksonville, Florida. Although the landing was not successful, the company came close to carrying out this feat – an effort highlighted by SpaceX’s CEO and Founder, Elon Musk during his tweets.

“Rocket made it to drone spaceport ship, but landed hard. Close, but no cigar this time. Bodes well for the future tho…Didn’t get good landing/impact video. Pitch dark and foggy. Will piece it together from telemetry and … actual pieces.”

SpaceX has made a name for itself by attempting to lower the cost of sending payloads to orbit – and developing innovative ways in which this is conducted.

Interesting article Joe! Another point of interest is that SpaceX has only ever launched one mission on it’s initial manifest date. 17 missions this year would be great, and impressive! But as you stated, not sure that’s realistic…

So you are saying “Part of the potential cause for the lack of completing the full manifest – is the fact that the company is working to have a good portion of the Falcon 9 family of boosters be reusable.” Where do you get the information that re-usability causing a slip to the schedule? I myself do not think that they will launch more than 10 -11 times this year, but even that is good increase from last year. In 2016 – with 4 pads in operation 16 launches is very possible. Additionally, in 2014 even though Spacex launched 6 times it may have been been due to lack of spacecraft ready for launch.

The other thing to keep in mind is they’ve had range issues at KSC. They had that delay due to the radar issue and they’ve also had to schedule around other launches. I think once they have operations going in Texas it’s going to help immensely.

I’d say given operations so far, their schedule is ambitious, however I do think it’s completely in the realm of possibility. A lot of this comes down to manpower – if they have the ability to have multiple crews working side by side without stepping on each other’s toes then it’ll help. There’s still bottlenecks where you only have one operations team to handle certain tasks and that’s where they’ll have to focus their efficiency.

Yes 2 pads will certainly help and I think 4 flights are manifested from Vandy. At the end of the day, I guess a customer would be quite happy with a short delay just to be certain that all’s ok as opposed to a LOM.
SpaceX has, in the last year, demonstrated a ramp-up of 100% with a mission success rate of 100%.
I’ll let those results speak for themselves. Over on NSF, a poll shows equal support for 10 and 12 flights. I chose 11 just on the basis of 1 a month with a slip.
Cheers.

A heavy and demanding manifest can be accomplished if it’s done right. What happens in most industries, including space, is; management starts pushing workers to do more and more disregarding safety and quality, taking shortcuts. This is usually done by lower management who is under pressure from upper management. Space x is especially venerable to this since they have a work culture that doesn’t have the oversight of sufficient quality or safety. Most workers in this type of industry appreciate a second set of eyes watching out for whatever may or may not happen. In the long run, everyone benefits from a more reliable product and safer working conditions

In reveiw to what recently occurred with the Russian resupply mission that was unsuccessful, it’s clear now to see that the supply and demand for constant resupply missions is needed.
“The Dragon Space Ship” is a 21st century reusable craft and has proven that it’s dependable, reliable, quick to respond to NASA’S needs up to the ISS!
SpaceX is a International Rocket Company representing customers from around the world with a unblemished track record. Yes maybe
(2 pads)are needed, reliable, dependable, Substainable, they are tracking to be #1 in the world for space travel..
Load the Dragon…. up..xz!!!