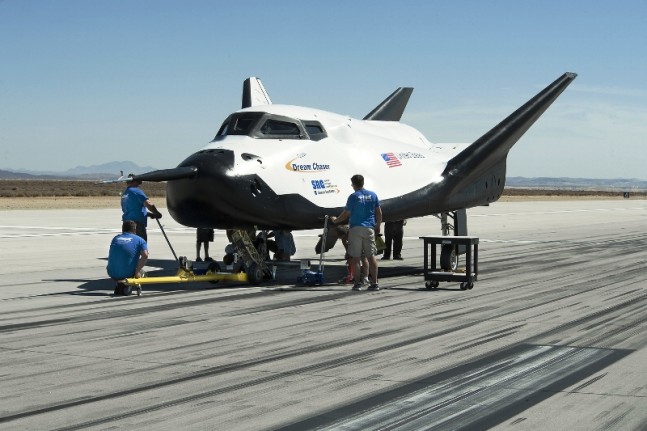 According to reports appearing on Florida Today , Sierra Nevada Corporation (SNC ) has laid off employees who were working on the company’s offering under NASA’s Commercial Crew Program (CCP ), the Dream Chaser space plane. SNC has also stated that it will continue to develop the spacecraft for possible use with other nations’ human-rated space programs and that it has issued a protest over NASA’s selection of Boeing’s CST-100 space taxi and Space Exploration Technologies’ (SpaceX ) Dragon V2 spacecraft.

The U.S. Government Accountability Office has until Jan. 5 to respond to SNC’s protest. Meanwhile, the Colorado-based company has decided to let some 9 percent of the workforce that SNC hired to produce the Dream Chaser. According to Florida Today, SNC’s staff in its Space Systems branch has increased from 200 – to a team of about 1,100.

These employees were hired in the hopes that the spacecraft would be selected. With this not taking place, the firm has opted to reduce the staff working on the program. On Sept. 16, NASA held a press conference at NASA’s Kennedy Space Center to announce that it had opted to choose the CST-100 and Dragon to fly astronauts to the ISS, the only current destination in low-Earth-orbit.

Under the agreement, Boeing was awarded $4.2 billion and SpaceX $2.6 billion to carry out a minimum of one orbital test flight each – and each with a NASA astronaut on board. NASA and its commercial partners hope to carry out the first flights of these spacecraft by 2017. The U.S. space agency hopes to have crews of up to four astronauts fly to the orbiting outpost via these commercially-developed vehicles while NASA looks to sending crews to deep space destinations such as an asteroid and possibly Mars.

SNC’s Dream Chaser was the only non capsule-based design competing under CCP, making the mini shuttle a fan favorite with many in the space industry. The Dream Chaser would have launched atop United Launch Alliance’s Atlas V 401 rocket from Cape Canaveral’s Space Launch Complex 41 and would have landed at NASA’s Shuttle Landing Facility at the adjacent Kennedy Space Center. The winged, lifting-body spacecraft would have been processed at NASA’s Neil A. Armstrong Operations and Checkout Facility.

Even though the Dream Chaser was not selected to proceed under CCP, it still has to finish milestones under prior phases of the CCP. Sierra Nevada Corporation could be used by either the European Space Agency or Japanese Aerospace Exploration Agency (JAXA ). It is not clear if Dream Chaser would still launch using the Atlas V, or if a Mitsubishi H-IIA (for JAXA) or one of Arianespace’s boosters (ESA) would be tapped and in so doing exporting Dream Chaser to either Tanegashima, Japan or Kourou, French Guiana (the launch sites for JAXA and ESA respectively).

“We are excited about the potential of this new relationship with Japan,” said Mark N. Sirangelo, corporate vice president of SNC’s Space Systems. “This expands our global Dream Chaser Space System partnerships to include another major ISS partner with demonstrated capabilities that significantly advance space education and exploration. Japan, like the United States, has the infrastructure to support both launch and landing of the Dream Chaser spacecraft within its own borders.”

SPARKS, Nev. (Sept. 26, 2014) – Sierra Nevada Corporation (SNC) announced today that it has filed a legal challenge to the award of contracts to Boeing and SpaceX under the Commercial Crew Transportation Capability (CCtCap) program.  The CCtCap program will restore U.S. transportation capability to the International Space Station.

SNC, Boeing and SpaceX submitted separate proposals for the CCtCap program.  While all three competitors were found to be compliant and awardable under the criteria set forth in the request for proposal (RFP), only two proposals were selected (Boeing and SpaceX), one of which would result in a substantial increased cost to the public despite near equivalent technical and past performance scores.

In its 51 year history SNC has never filed a legal challenge to a government contract award.  However, in the case of the CCtCap award, NASA’s own Source Selection Statement and debrief indicate that there are serious questions and inconsistencies in the source selection process.  SNC, therefore, feels that there is no alternative but to institute a legal challenge.

The company believes that, in this time of critical budget limits, it is more important than ever to deliver the best value to the American public. With the current awards, the U.S. government would spend up to $900 million more at the publicly announced contracted level for a space program equivalent to the program that SNC proposed. Given those facts, we believe that a thorough review must be conducted of the award decision.  The company feels it owes this extra effort to their employees, the over 30 Dream Team U.S. industry partners, 10 university partners, 10 international space agency and industry partners – all of whom believe in Dream Chaser® and that the proposal that was submitted by SNC is the best choice for NASA and the American public.

Importantly, the official NASA solicitation for the CCtCap contract prioritized price as the primary evaluation criteria for the proposals, setting it equal to the combined value of the other two primary evaluation criteria: mission suitability and past performance.  SNC’s Dream Chaser proposal was the second lowest priced proposal in the CCtCap competition. SNC’s proposal also achieved mission suitability scores comparable to the other two proposals.  In fact, out of a possible 1,000 total points, the highest ranked and lowest ranked offerors were separated by a minor amount of total points and other factors were equally comparable.

SNC’s Dream Chaser design provides a wider range of capabilities and value including preserving the heritage of the space shuttle program through its design as a piloted, reusable, lifting-body spacecraft that embodies the advanced technologies of today and flexibility that enables the innovations of the future.  It was also the only vehicle remaining in the Commercial Crew Program that was not a capsule.

SNC’s filing seeks a further detailed review and evaluation of the submitted proposals and capabilities. SNC takes the nation’s human spaceflight capability and taxpayer’s money very seriously. SNC believes the result of further evaluation of the proposals submitted will be that America ends up with a more capable vehicle, at a much lower cost, with a robust and sustainable future.
About Sierra Nevada Corporation’s Space Systems

Sierra Nevada Corporation’s Space Systems business area based in Louisville, Colorado, designs and manufactures advanced spacecraft, space vehicles, rocket motors and spacecraft subsystems and components for the U.S. Government, commercial customers, as well as for the international market.  SNC’s Space Systems has more than 25 years of space heritage and has participated in over 400 successful space missions through the delivery of over 4,000 systems, subsystems and components.  During its history, SNC’s Space Systems has concluded over 70 programs for NASA and over 50 other clients. For more information about SNC’s Space Systems visit www.sncspace.com and follow us at Facebook.com/SNCSpaceSystems.
About Sierra Nevada Corporation

Sierra Nevada Corporation (SNC), headquartered in Sparks, Nevada, is one of America’s fastest growing private companies based on its significant expansion and reputation for rapid, innovative, and agile technology solutions in electronics, aerospace, avionics, space, propulsion, micro-satellite, aircraft, communications systems and solar energy. Under the leadership of CEO Fatih Ozmen and President Eren Ozmen, SNC has a workforce of over 3,000 personnel in 31 locations in 17 states. SNC’s six unique business areas are dedicated to providing leading-edge solutions to SNC’s dynamic customer base.

SNC is also the Top Woman-Owned Federal Contractor in the United States and among the “World’s Top 10 Most Innovative Companies in Space.” Over the last 30 years under the Ozmen’s leadership, SNC has remained focused on providing its customers the very best in diversified technologies to meet their needs and has a strong and proven track record of success. The company continues to focus its growth also on the commercial sector through internal advancements in dual-use applications and outside acquisitions, including the emerging markets of renewable energy, telemedicine, nanotechnology, cyber and net-centric operations. For more information on SNC visit www.sncorp.com and follow us at Facebook/Sierra Nevada Corporation. Sierra Nevada Corporation and SNC are trademarks of Sierra Nevada Corporation. Well the only company that they can really protest against is Boeing. NASA should’ve capped the awards at 3 billion. Boeing need to put more “skin” in the game. If they don’t want to, then, they don’t need the award. I still think that SNC should’ve gotten at least 1.6 billion for a couple of trips to the ISS. Just my opinion.

Curious. .. why would Boeing have to put more skin in the game, but nobody else does…?

Boeing has put up some of its own money for this effort. I’m curious as to why people don’t think that perhaps SpaceX and SNC underbid their efforts.

Boeing plans a space plane X-37C sometimes in the 2020s. They plan a reusable rocket, with Blue Origin technology, sometimes in the 2020s. In the 2010s they offer a parachute-landing capsule riding an old and expensive rocket for $900 million more than an offer of an already existing space plane riding the same rocket and even $1.6 billion more than an offer of an already existing (theoretically) reusable rocket with a point-landing capsule…and win the 1st place! Have senators total legal immunity in the USA? I mean I dunno, I’m not from there 😉