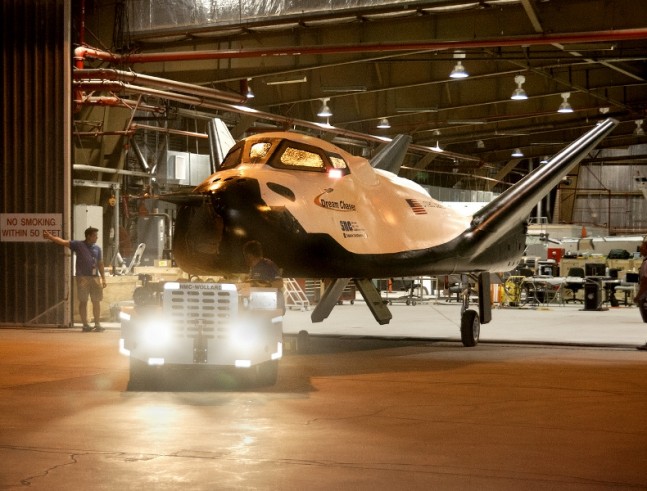 Fresh off the announcement that the Dream Chaser spacecraft would not proceed to the Commercial Crew transportation Capability (CCtCap) phase of NASA’s Commercial Crew Program, Sierra Nevada Corporation (SNC), Dream Chaser’s manufacturer announced it will be offering up mini shuttle to other investors. The company recently unveiled its Global Project spaceflight program at the 65th International Astronautical Congress (IAC) held in Toronto. The concept behind the plan is something that others, most notably the Golden Spike Company, have posted before and could mark a turning point in who is able to carry out orbital missions.

Under the Global Project, Dream Chaser would be offered up to clients who might not be able to develop a similar system on their own. Freed of the prohibitive costs involved with fielding a crewed mission, these entities could, in essence, gain a manned space program – with all the trimmings. Customers (likely smaller and less-developed nations) would be able to “customize” the Dream Chaser to suit the needs of the particular mission that they want to carry out.

“The SNC Global Project provides, for the first time in history, an unprecedented and unique set of spaceflight opportunities for clients around the world,” said John Roth, vice president of business development for SNC’s Space Systems. Both the Japanese and European space agencies have expressed interest in using the Dream Chaser space shuttle in their own manned programs. Image Credit: SNC / NASA

Along with developing, testing and producing the spacecraft, other costs involved in having a manned space program include the infrastructure involved with maintaining the launch vehicles, facilities and ground support systems.  SNC is offering a training program, one based off of NASA’s certification standards. Given that Dream Chaser has been developed and tested by NASA, the company should be able to potentially provide clients with services that meet if not exceed similar programs.

The Colorado-based firm has included elements that are meant to handle crewed flights, payload and vehicle safety operations as well as other elements critical to conducting orbital missions. SNC has stated crews that would fly on Dream Chaser under the firm’s Global Project would be trained at SNC’s Dream Chaser Training Facility and Space Operations Center.

These future Dream Chaser crews would be required to complete training involving pre-flight, ground, payload and mission control aspects of their specific missions. Clients can also be provided with assistance in establishing training programs.

Based off of NASA’s HL-20 lifting body design, Dream Chaser, like the other competitors under NASA’s Commercial Crew Program, Boeing’s CST-100 and SpaceX’s Dragon spacecraft – has yet to launch any crew to orbit. Dream Chaser stood out from the other offerings under CCP as being the only winged spacecraft which is designed to conduct a controlled landing on a runway. Dream Chaser is described as being capable of either crewed or autonomous flight. On Sept. 16, NASA announced that SNC’s offering had not been selected under CCtCap. The company has since filed a protest.

Even though it was not selected by NASA, SNC has already announced that both the Japanese Aerospace Exploration Agency (JAXA) and the European Space Agency have expressed interest in Dream Chaser.

As noted, Sierra Nevada’s Global Project, bears some resemblance to the business model of the Golden Spike Company which has stated it will provide transportation services to the surface of the Moon for nations that would not otherwise have the infrastructure or ability to do so on their own. Under SNC’s new initiative, Dream Chaser would serve as the baseline for an array of commercial, government or academic missions. According to SNC, these flights could either be crewed or uncrewed and could constitute a single flight – or a series of missions.

“SNC is offering access to crewed or uncrewed space missions that include an optionally-piloted space vehicle, a launch vehicle or choice of launch vehicles, and the supporting infrastructure and systems required for such a valuable program. The Global Project offers a client the opportunity to leverage and expand its local technology and industrial base by engaging government research and development laboratories, aerospace industry and universities in developing payloads, vehicle modifications, and ground processing capabilities in support of the selected LEO missions. This program will literally make space accessible to people all over the world, enabling those who have only dreamed about going to space to finally achieve it,” Roth said. I’m willing to devote my engineering and support to the dream chaser…how can I help from Huntsville Alabama… Aerospace engineer…no parachutes involved. Give me a call at 256 772-8527,,, your dream chaser volunteer.

Well we need something that flies not floats

NASA has truly botched CCTCAP, in my opinion, with the selection of similar redundant capsule systems. We can only hope that SNC’s protest is fruitful and that JAXA & ESA will support further development to flight.

If it comes to a settlement between the three companies. I think a split of $3 billion to Boeing, $2.6 billion to SpaceX, and $1.2 billion to SNC would be a fair amount.

When you consider that Soyuz will still be flying five years from now funding two similar capsules seems to lack forward planning, especially when you consider that Space X would probably have continued to develop their capsule without NASA funding. The addition of a versatile lifting body type vehicle with it’s multi landing capability would have been a good investment for the USA. I hope the ESA have the guts to put some Euros into the project. If Dream Chaser ends up flying for Europe NASA will end up with egg on it’s face.