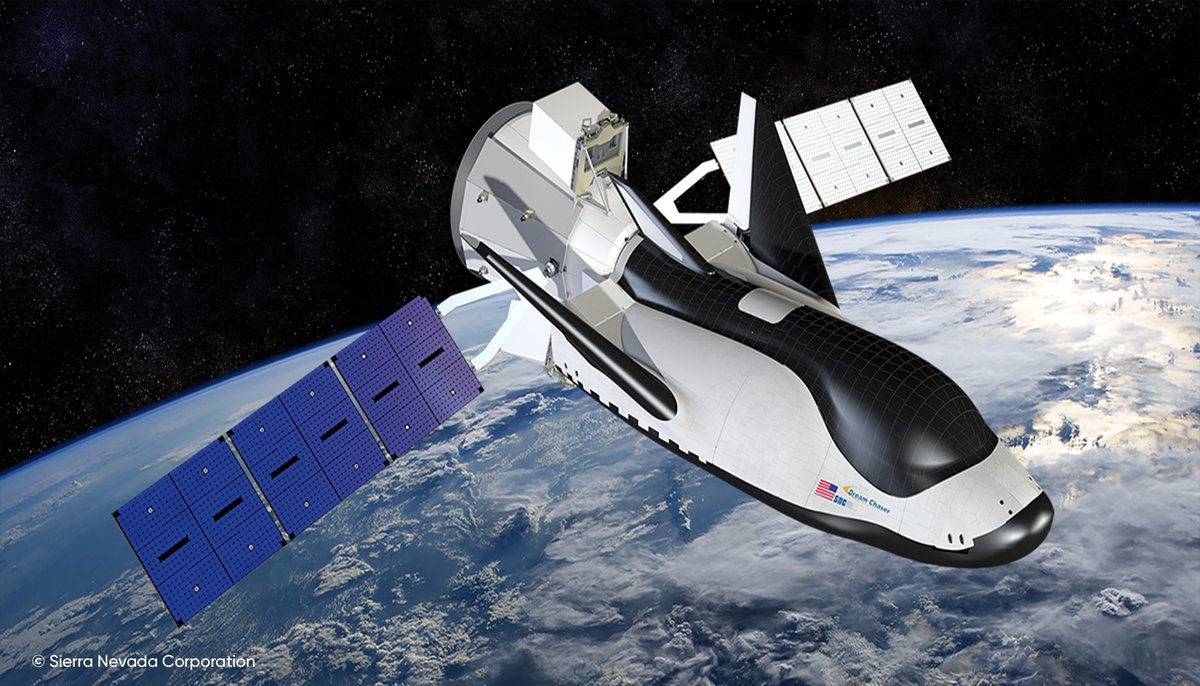 Over the last several weeks, Sierra Nevada Corporation (SNC) released a number of updates regarding its progress on the Dream Chaser space plane ranging from the completion of a NASA development milestone to an updated color scheme.

Dream Chaser is one of three vehicles planned to resupply the International Space Station in NASA’s second phase for the agency’s Commercial Resupply Services contract, also called CRS2. The other two are SpaceX’s Dragon capsule and Northrop Grumman’s Cygnus spacecraft.

However, Dream Chaser is still in development. Possibly the most visible aspect of SNC’s updates over the last month or so is that the body assembly, or pressure vessel, for the first flight vehicle is in the final stages of fabrication. It is being built by Lockheed Martin Skunk Works, among other subcontractors.

According to the video, the pressure vessel integrates “nearly 150 parts using state-of-the-art joining technology and more than 1/4-mile of advanced 3D-woven preforms.”

Once completed and at SNC’s facility in Louisville, Colorado, the company said it will be further integrated into the Dream Chaser spacecraft, which will include heat shielding, reaction control systems, and other components required for a mission to resupply the ISS. The design initially featured black, heat-absorbing tiles all over its surface.

The main aspect of the milestone tests was to provide a dress rehearsal of sorts for the Dream Chaser’s main systems, as well as provide simulation for Dream Chaser’s Mission Control. These tests were accomplished at SNC facilities in Louisville, Colorado, and NASA’s Kennedy Space Center in Florida.

“This milestone is a great accomplishment for the team focused on operations development and demonstration,” John Curry, a program director with SNC, said in a news release at the time. “It shows we can operate the Dream Chaser from the ground, including getting critical science in and out of the vehicle.”

More recently, SNC announced changes to the vehicles look. On April 7, 2019, the company said it was adding more white tiles in between the black tiles in order to reflect heat. The goal is to maintain a temperature between 65 and 85 degrees Fahrenheit (18 and 30 degrees Celsius) during re-entry.

Dream Chaser’s development has been ongoing for a while. It was initially a finalist for use in NASA’s Commercial Crew Program before the space agency ultimately selected SpaceX’s Crew Dragon and Boeing’s CST-100 Starliner in 2014.

SNC proposed a cargo variant of its Dream Chaser and was ultimately awarded a contract in 2016 to fly six resupply missions to the ISS.

With the successful completion of IR5, the company said it is tracking to fly its first cargo mission by 2021. It will fly atop an Atlas V rocket and has foldable wings that allows it to fit inside the booster’s payload fairing. It is also expected to include an expendable cargo module at the back of the space plane that can support external payloads.

In general, CRS2 missions, which also include SpaceX’s Dragon capsules and Northrop Grumman’s Cygnus spacecraft, are slated to begin in 2019 with the NG-12 Cygnus mission and last until at least 2024.