With failures piling up, Roscosmos looking to retry Phobos-Grunt mission 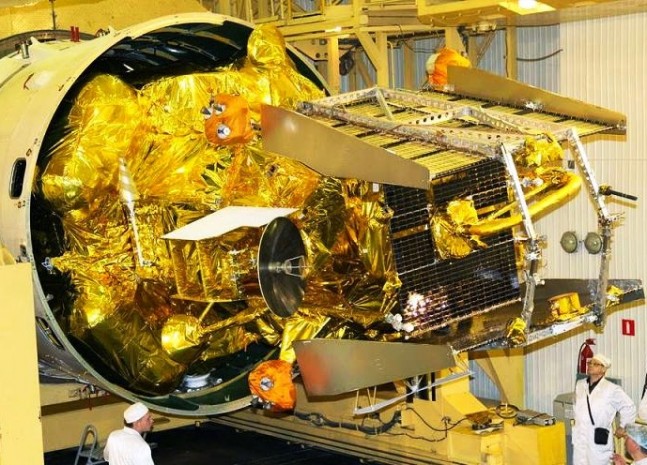 Roscosmos has been directed to attempt a sample recovery mission to the Martian moon, Phobos. This will mark the second time the organization has been tasked with accomplishing this goal. Photo Credit: Roscosmos / TASS

The Russian Federal Space Agency (Roscosmos ) has not always had the best of luck lately in launching things into orbit, let alone to points beyond. However, with the recently announced plans to send another spacecraft to the Martian moon Phobos, the agency appears poised to make a second attempt – at a very difficult target. Roscosmos’ plans were unveiled via a budget proposal that details the agency’s funding over the course of the next decade (2016-2025 ). In that proposal was a push to reignite the failed 2011 Mars-Grunt (Soil) mission.

Launched on Oct. 17, 2011, atop a Zenit-2SB41 booster from the Baikonur, Cosmodrome, the Phobos-Grunt (translated, it literally means “Phobos-Ground”) mission escaped Earth’s atmosphere. After about two-and-a-half hours, the autonomous main propulsion unit (MDU), which came from a modified Fregat upper stage, appeared to have had encountered a malfunction.

After an extensive period of trying to get the mission under way, it was obvious that the spacecraft was not salvageable. Rather than obtain samples from a far-flung world, Fobos-Grunt and its highly-toxic hydrazine and nitrogen tetroxide fuel burned up in Earth’s atmosphere upon re-entry, on Jan. 15, 2012.

According to the Tass report via Russia’s Defense Ministry, the original Phobos-Grunt probe’s fragments that did not burn up in the atmosphere had fallen into the Pacific Ocean 1,250 km (777 miles) west of Wellington Island (Chile). For one long-time follower of Russia’s space exploration efforts, this was not just a Russian failure. “A Phobos sample return is a critical step in preparation for on-site resource utilization for future human missions, so it’s depressing how far the impressive Russian ambitions have been frustrated and delayed – we all are losers,” James Oberg, a noted space journalist and historian told SpaceFlight Insider. “Russia hasn’t had a successful lunar or planetary mission in more than a quarter century, and for them, Phobos remains ‘a bridge too far’ where high ambitions have forestalled a more modest but more plausible renewed deep space science strategy.”

Oberg went on to note that with the Japan Aerospace Exploration Agency, or “JAXA”, now working on its second asteroid retrieval mission (Hayabusa 2 ), it is possible that Russia will again be surpassed as it was during the race to the Moon by the United States.

As with the failed 2011 mission, this new spacecraft will seek to obtain a soil sample from one of Mars’ two natural satellites, Phobos (Mars’ other moon is called “Deimos”). If successful, this sample would then be returned to Earth.

If Russia can achieve this feat, it will mark the first time that the nation has been able to carry out a confirmed, successful landing on either Mars or one of the planet’s moons.

Roscosmos has been provided with an estimated 10.3 billion rubles ($198 million), according to a report appearing on Tass, the Russian News Agency, which is more than twice the amount listed under the draft of the funding proposal for the federal space program prepared that was submitted last year. If everything goes according to plan, the second Phobos-Grunt mission should get underway in 2024.

Other Russian space efforts have not fared too well in the recent past. Besides the loss of Phobos-Grunt, the Russian Space Agency has also lost two Progress resupply spacecraft prior to their intended goal of ferrying supplies to the International Space Station. On top of that, no fewer than six Proton launches have encountered either partial or total failures since 2010, with two Soyuz-2 rockets having encountered similar fates along with three Soyuz-U launch vehicles – either only partially achieving their goals or encountering total failure as well.

Within that same time frame, only three U.S. launch vehicles have encountered either partial or total failures. The most prominent being the loss of the Antares booster in October of last year due to the failure of an Aerojet Rocketdyne AJ26 rocket engine. Then there was the engine-out anomaly encountered by a SpaceX Falcon 9 v1.0 booster in October of 2012 (however, due to the F9’s design, the primary objective of sending a Dragon resupply vessel to the space station was completed, with only the loss of the secondary payload marring the rocket’s perfect track record). Finally, there was the loss of NASA’s Glory mission in 2011 due to the Taurus XL 3110’s fairing failing to open. A mockup of the base of the 2011 Phobos-Grunt spacecraft. Photo Credit: WikiBob

That many failures of older rocket designs makes me wonder what is going on over there.

And the SpaceX engine-out didn’t spash the secondary payload; it just didn’t make it to the intended orbit. As I understand it, the satellite owners were able to do useful things with the bird.

Yes and furthermore the secondary could have made it to the intended orbit, even with engine out, if SpaceX wasn’t required to follow NASA CRS fuel margin requirements for the primary Dragon. Secondary payload was test bird and customer knew these limitations were in play given the requirements. Very cheap way to get any orbit time for test bird.

I don’t know why the article didn’t state that the partial loss of SpaceX’s secondary payload was NASA’s fault.

wait there have been 3 failures out of the US since 2010 the 2 mentioned and am I the only one who remembers the Glory mission (last Taurus XL rocket)?

Hi Mark,
You’re correct, an oversight on our part. We will correct it.
Sincerely, Jason Rhian – Editor, SpaceFlight Insider

The Russians will never quit trying to send a successful mission to Phobos. Two spacecraft failed in the 80’s, another mission failed after a launch failure in the 90’s, and then Phobos Grunt.

The most amazing thing about the latest mission was its ambition. A country that had never had a fully successful mission at Mars and hadn’t launched a planetary probe in decades was going to bring a soil sample back from Phobos. That would have been challenging for NASA, and they’re the best in the world at Mars exploration. They really need to rebuild their planetary exploration effort from the ground up. And I don’t think they have the people to do it. There’s been a severe shortage of replacement workers in recent decades.

If you want to go back a year, the U.S. has had four serious launch anomalies. Taurus XL vehicles dumped NASA environmental satellites into the ocean twice in 2009 and 2011 due to the failure of shrouds to separate. There’s the Antares crash, and the SpaceX engine out that stranded the Orbcomm satellite in a low orbit.

The Orbcomm spacecraft was a test satellite. The company was able to test it, but only few a short period before it reentered. I believe it was only a matter of days.

If we’re playing the blame game, the responsibility is on SpaceX. Their rocket didn’t perform as planned. They had an obligation to the safety of the primary payload. NASA had a right to set mission rules as the funder of said payload. No satellite operator would ever let a secondary payload endanger their spacecraft.

The other thing to remember is Orbcomm signed for flights aboard Falcon 1e, which SpaceX never got around to developing. The company had to wait a good long time even to fly the test satellite.

With regards to SpaceX and the Orbcomm2 spacecraft, recall that SpaceX had not had a successful second stage restart until the SES-8 GEO transfer orbit launch after SpaceX corrected the insulation and re-routing of the 2nd stage engine starting fluid lines. Had NASA given the go ahead in the case of the 1st Orbcomm2 satellite, there is doubt in my mind that the 2nd stage would have restarted. While the Orbcomm2 qual satellite did accomplish some of its goals, it was so low that it could not overcome the atmospheric drag forces to achieve 3-axis stability and reentered within 3 days. There would have been much more useful information and performance data gathered had it achieved the intended orbit. There is always going to be an * asterisk besides their 100% success claims. That being said, my hat is off to SpaceX for accomplishing so many impressive spaceflight firsts and shifting the paradigm of the rocket business worldwide – they have every reason to be proud for what they have achieved.