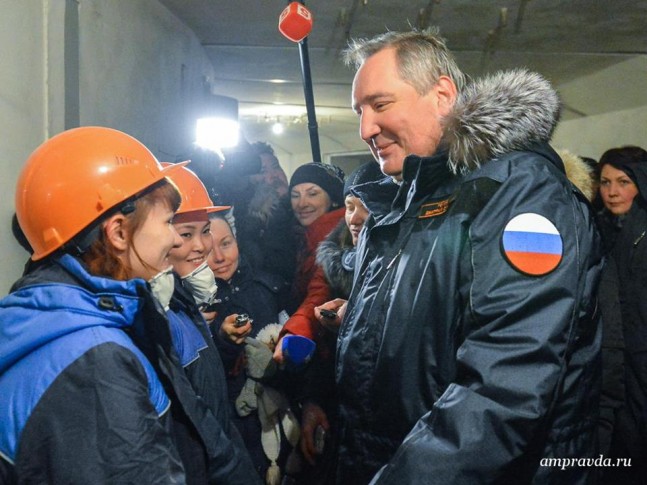 Russian Deputy Prime Minister Dmitry Rogozin tours the progress at Vostochny cosmodrome construction site every month. On Feb. 27, he went to inspect the facilities, and then held a working meeting with representatives of the Russian Federal Space Agency Roscosmos and Federal Agency for Special Construction Spetsstroy.

Clear skies, snowy terrain and never-ending freezing cold – the winter scenery is where all the space launch action will take place. But now, only a white helicopter lands near the missile assembly complex. “You will need all the resources, all that you have – human, material, financial!” yells the man who has just disembarked the chopper.

He doesn’t seem to be interested in how the desired supplies will be collected, focusing only on the end result. “I want to make sure personally that all the key people are here,” he says vigorously. “All decisions will be taken only here and also executed here.” In fact, Moscow seems like a faraway land, thousands of miles away from here. The visits to the Vostochny cosmodrome construction site in Russia’s Far East Amur region are to assure the government that work continues amid many disruptive obstacles.

The country’s new window to space is expected to reduce Russia’s dependency on the Baikonur cosmodrome in Kazakhstan, which is on lease from the Kazakh government until 2050.

Rogozin oversees Russia’s space sector and is very active in the Vostochny project. In 2011, he was appointed as Deputy Prime Minister, in charge of defense and space industry. Last year, cameras had been installed throughout the construction site and linked to his office in Moscow so that he could monitor the workflow and root out “slackers.” He often shares pictures of his visits to the cosmodrome on his Facebook page. Now, the live stream from Vostochny is also available to the public on the Roscosmos website, allowing people to watch the facility being constructed.

“This is the people’s construction, and I want cameras to broadcast not only on my computer in Moscow,” Rogozin said in January. “I believe that it will allow people to monitor what is happening on the construction site.”

Vostochny is estimated to be two to three months behind schedule. While visiting the construction site in February, Rogozin put all the blame for the delays on Spetsstroy.

“I remind you that the start of construction works at the Vostochny cosmodrome was the order of the President of the Russian Federation, according to which the sole executor of this works is Spetsstroy Russia, not ‘Dalspetsstroy’, neither any other  daughter nor granddaughter companies,” Rogozin said. “Therefore, Spetsstroy bears full responsibility for the execution of all works.” Alexander Mordovets, the Deputy Director of Spetsstroy, was defending his company by claiming that the bureaucracy is slowing down the progress. He complained about the large amount of documentation that has to be completed by the workers.

Then Rogozin warned that if the orders are not executed the company will be punished with “the most severe penalties” as he described it.

Thankfully, a compromise has been reached as Rogozin agreed to assign more manpower to the construction site and to send more staff to complete all the necessary paperwork. He also gave Mordovets the full authority to organize the work at Vostochny.

“There must be complete unity of command. We have agreed to that today,” Rogozin said. “Alexander Alexandrovich Mordovets received full power, all the rights, and responsibilities for the organization of all activities to fully overcome the lag.”

The right people on the right place are important for Vostochny to allow the first launch which is now planned on Dec. 25, 2015. “As of today, the launch date is set for December 25. The date may later change insignificantly,” Russian news agency TASS reports.

The race is now on to install the metal structures of the launch pad and the myriad of systems supporting launch operations. The internal outfitting had actually started during 2014; however, the bulk of this work would have to be completed in the first half of 2015.

Russia’s “Al Gore” of space operations. I will be happy for the Ruskies when they get it going, along with their Soyuz replacement.

Vostochny represents the future of Russian spaceflighr leaving Baikonur for “the history books.” I wonder when the Russians will finally replace the venerable Soyuz. I seem to remember a “heavy Soyuz” and the cancelled “Klipper” vehicles.