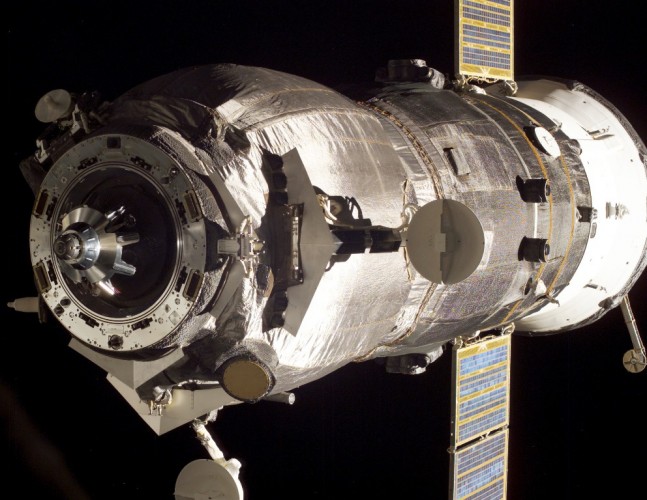 The fallout from the loss of the Progress M-27M spacecraft is continuing to unravel.
Photo Credit: NASA

When Roscosmos’ Progress 59P and its more than 6,000 pounds (2,722 kg) of cargo and crew supplies was deemed a complete loss a few days after its April 28 launch, it did not appear that it was anything more than just a black eye for the Russian Federal Space Program. With the revelation that debris from the failed mission represents a collision threat – that assessment has now changed.

NASA reported that the Progress 59 cargo craft re-entered the Earth’s atmosphere at 10:04 p.m. EDT on May 7 over the central Pacific Ocean. The Russian News Agency, TASS, reported that Roscosmos has decided to adjust its planned flights to the space station.

A report appearing on the European Space Agency’s rocket science blog on May 8 noted the estimated time and position that the vessel conducted its fiery plunge into Earth’s atmosphere as follows:

Our partners in USSTRATCOM with whom we have been sharing data throughout the campaign have confirmed the re-entry of Progress M-27M.

This corresponds to an altitude of around 80 km (so, roughly, 10 minutes from touch down). This would have been the point in time where the re-entering object was the hottest and so observable from space. This time also corresponds to a location of 51 Degrees South latitude and 273 Degrees East longitude, over the ocean west of the southern tip of the coast of Chile. The cause of the accident is honing in on the Soyuz launch vehicle itself (archive photo).
Photo Credit: Bill Ingalls / NASA

NASA also addressed the status of the Progress 59P spacecraft and its payload last week, with a focus on ISS operations:

The spacecraft was not carrying any supplies critical for the United States Operating Segment (USOS) of the station, and the break up and re-entry of the Progress posed no threat to the ISS crew. Both the Russian and USOS segments of the station continue to operate normally and are adequately supplied well beyond the next planned resupply flight.

The investigation into what went wrong during the resupply mission has focused in on the Soyuz-2.1a launch vehicle itself with the initial findings being submitted as early as Wednesday, May 13, according to SpaceFlight Now’s Stephen Clark, with a full report due at the end of this month.

Engineers are taking a closer look at the third stage separation as a probable cause for the flight deviation. The third stage of the Soyuz (known as Block I) holds the payload section – in this case, the Progress vehicle – in place using a series of three sets of pyrotechnic bolts. When the command is given, the bolts separate and three sets of springs gently push the two spacecraft sections apart. To prevent the payload from spinning or veering off course, a collection of 33 guide pins keep the sections in line as they are pushed apart. Roscosmos has opted to delay crewed flights to the International Space Station until a root cause to the accident can be found. Photo Credit: Bill Ingalls / NASA

It is still unknown is why Progress M-27M started to spin wildly after separation. Despite the hardware in place to prevent such a separation from occurring, it is believed that something did go wrong at this point or immediately thereafter. At this point, data is sketchy as to what exactly happened as telemetry from the third stage stopped coming in to mission control 1.5 seconds after the command (GK-3) to cut off the RD-0110 engines was sent to the craft. Video from the Progress spacecraft was not transmitting as one camera on board may have been switched off. Additionally, flight engineers were unable to obtain telemetry from the Progress craft shortly after the separation.

Given that the Soyuz rocket is the current, sole source of sending astronauts and cosmonauts to the orbiting laboratory, it should come as no surprise that the Russian Federal Space Agency has decided to push back crewed flights as well.

The problems caused by the second failed Progress resupply run in less than four years is not limited to delays to the flight manifest, however.

The 2013 motion picture Gravity detailed the possibility of a runaway impact event that could level much of humanity’s on orbit assets. Although fictional, the possibility of debris leftover from this failed mission impacting other spacecraft and satellites has become a very real concern. It is likely, however, that these will be from small parts of the booster and the spacecraft itself, and at this time it is unclear how long the threat these high-velocity leftovers will last.

The United States need to stop paying Russia for any flights, crewed or not crewed, take that money and put Commercial Crew on the fast track.

Wasn’t there a report about using lasers fired from the ground or a leo satellite to decelerate smaller pieces of orbital debris to speed up reentry of said debris?

Tom Unfortunately, because it is an international space station, all partners agreed that Russia would be responsible for manned transport until the U.S. has it’s own crew transport craft. The Russians will bounce back, though. They have a robust cargo & crew transport system.

Keep away from Russians? The only craft that goes to the ISS is the Russian Soyuz.