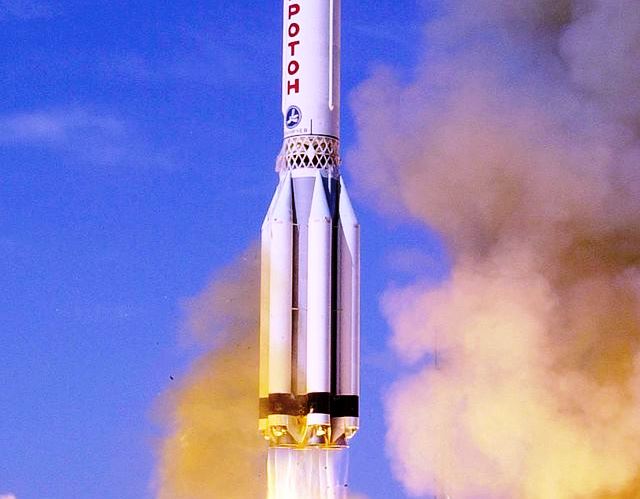 The recent loss of a Proton rocket and its payload of the MexSat-1 spacecraft have been linked to a known design flaw. Photo Credit: NASA

Russia’s Federal Space Agency, Roscosmos, has blamed the failure of the third stage’s engine for the latest Proton-M rocket crash on May 16, 2015. The failure was characterized as being caused by a design flaw. According to current findings, the shaft in the third stage engine’s pump failed due to excessive vibration loads, just as it did decades ago which also caused a Proton rocket crash back in 1988. The fact that a known issue caused the loss of the multi-million MexSat-1 satellite has cast another shadow on Russia’s current space efforts.

“The conclusion of the [investigation] commission: the cause of the failure of the Proton-M carrier rocket mission was the failure of the steering third stage engine due to excessive vibration as a result of imbalance in operation of a rotor of a pump unit,” said Roscosmos head Igor Komarov.

Aleksandr Ivanov, Roscosmos deputy chief, admitted that the cause was rooted in the design. Komarov agreed saying: “The failure was due to a design fault.” The Proton-M rocket lifts off the pad with the Cenenario/MexSat-1 satellite aboard. (Click to enlarge) Photo Credit: Roscosmos

Even more embarrassing is the fact that the officials involved with the investigation noted that eliminating the flaw will not require great cost.

They promised to take disciplinary and administrative measures following the inquiry and to present a plan for reforming the system of quality management in the space rocket industry.

Komarov ordered the Khrunichev Centre (Proton’s manufacturer) to develop a plan to eliminate similar issues in the future. The plan should include replacement of the material making up the shaft of the turbopump rotor, revision of rotor balancing techniques, and upgrading the attachment of the steering engine turbopump to the framework of the main engine.

“In the near future the shafts will be replaced in all turbo pumps,” Ivanov added, noting he is certain that the proposed measures would “cure the disease”.

“The inquiry identified quality management and manufacturing process inconsistencies. They are very clear. Instructions have been issued. A plan for eliminating the mistakes will be finalized within two weeks. Possibly, it will be systemic,” he said.

Roscosmos representatives concluded that despite recent launch failures, Russia will not give up on the use of Proton-M carrier rockets.

The date of the next Proton-M launch will be decided in June 2015.

On May 16, 2015, Proton-M launch vehicle with Mexico’s communication Satellite MexSat-1, lifted off as scheduled from the Baikonur Cosmodrome in Kazakhstan at 11:47 a.m. local time. Approximately eight-and-a-half minutes into the flight, just before third stage separation, an anomaly occurred. The rocket fell back to the ground from an altitude of approximately 100 miles (160 km) over Siberia.

The recent failure is another blow to Russian space industry on a long list of the country’s rocket accidents, a review of Russian space failures since 2011 can be found here.

As noted, these failures have unfortunately become rather common for Russian space efforts. Russian leadership replaced the head of Roscosmos two years ago in the hopes things would improve. A report appearing in the New York Times noted that, Vladimir A. Popovkin, who was appointed to lead the agency in 2011,  was dismissed in 2013 over the accidents Roscosmos was encountering at that time by Russian Prime Minister Dmitri A. Medvedev. Popovkin was replaced by Oleg Ostapenko.