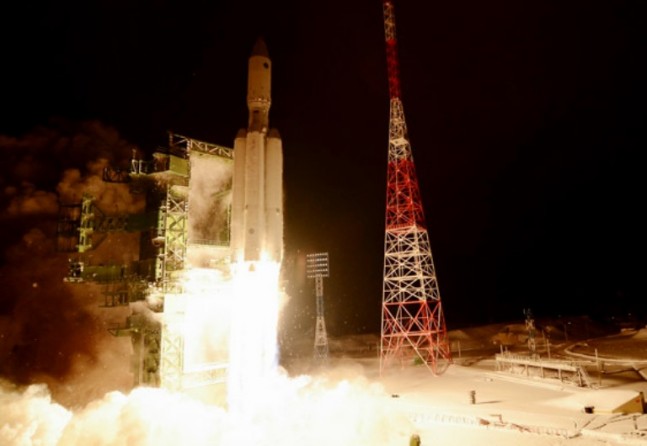 On Dec. 23, Russia successfully launched the heavy-lift version of its long anticipated Angara 5 rocket. The launch was not broadcast live, but according to the Russian Federal Space Agency, the rocket left the pad on schedule at 8:57 local Moscow time (0557 GMT/ 12:57 EST). The Angara 5 is part of the Angara family of boosters, and this launch is another step in Russia’s twenty year process to develop a modular replacement to the country’s dependable but aging (and diverse) array of launch options.

Designed to be a replacement for the Proton rocket, the Angara’s first stage was reported as functioning nominally, and released the Breeze M upper stage approximately 12 minutes into the flight. Several new technologies were tested on this flight, and all were reported to function as expected. Following a scheduled series of engine burns, the upper stage deployed a mock satellite into orbit.

The Khrunichev State Research and Production Space Center (the lead contractor on the rocket) describes Angara’s propulsion system: The Angara Space Launch System represents the next-generation modularized launch vehicles that will be built around two common rocket common core boosters (CCBs) using oxygen-kerosene engines URM 1 and URM 2, respectively…The LOX/kerosene common core booster (CCB or URM) is a wholesome structure that includes an oxidizer tank, a fuel tank (both tanks being coupled by a spacer) and a propulsion bay.

Each CCB is fit with one RD 191 high-power liquid engine. This engine is being developed on the basis of (1) the four-chamber engine used earlier by the Energia launch vehicle and (2) the RD 170/171 engine still in operation on the Zenith LV. One CCB (URM) is used by the light-weight Angara 1.2 LV. The maximum number of CCBs is seven (Angara A7). A prototype of Angara’s first stage, URM-1, has been flight-tested on three occasions (2009, 2010, 2013) as part of Korea’s KSLV-1…Angara A5 will use Breeze-M or KVTK as its upper stage. The Angara A5 rocket prior to rolling out to the pad at the beginning of Nov. Photo Credit: Russian Ministry of Defense

The configuration that flew today, consisted of five RD-191 engines, a central engine surrounded by four additional engines, each fueled by kerosene and manufactured by NPO Energomash out of Khimki, Russia. All five motors fired in union and just over three minutes into the flight, the four outer boosters jettisoned, leaving behind the central booster to continue to fire until the fuel had been exhausted.

Following first stage separation, the rocket relied on borrowed technology. A second stage RD-0124A engine and a Breeze M (Briz M) upper stage were borrowed from the Soyuz and Proton designs, and propelled the vehicle and payload up to the intended orbit.

Angara 5 has a liftoff mass of some 773 metric tons, and is the largest rocket to come into service since the 1980’s. The orbital trajectory of this test flight has not been disclosed, though some speculate a likely geostationary orbit for the mock payload. This type of orbit is often used for military and commercial satellites. Despite the many successes of the Russian launch industry after the fall of the Soviet Union, the Russian Federation has, for two decades, struggled to implement its vision for an updated family of launch vehicles. The suite of Angara rockets in development and testing now represents an effort to replace a wide variety of established Russian systems.

Angara 1.1 and 1.2 have been designed to replace smaller rockets such as the Kosmos-3M, Rockot, and Tsyklon. The Angara 3 rocket is expected to phase out the medium-sized Zenit, while the heavy Angara 5 is poised to replace the Proton rocket. The entire Angara family, upgraded in size by the addition of modular kerosene engines, may spell the end for the ubiquitous Soyuz rocket, which has dominated the headlines since the 1960s.

Today’s test flight of the heavy-lift variant (Angara 5) comes five months after an embarrassing start to flight-testing. On June 27, the maiden voyage of Angara 1.2, Russia’s first post-Cold War rocket, was aborted when the onboard computer detected an anomaly in the booster’s first stage propulsion system. Reports issued at that time indicated a leak in the rocket’s oxidizer valve. With President Vladimir Putin watching the events live, headlines noted the political significance of the attempted launch (which was rescheduled for early July). Angara 5 is Rolled Out in Mirny. Photo Credit: Khrunichev.

Just as recent political events in the Ukraine have prompted many in the United States to scrutinize the reliance on Russia for access to the International Space Station (ISS), so too have schisms in the former USSR instigated a Russian attempt to bring space capacities in-house. Russia still performs its larger launches at Baikonur Cosmodrome in Kazakhstan (a relic of the Cold War).

Russia has since embarked on the construction of a domestic launch facility in Mirny, the Plesetsk Cosmodrome. The Angara rocket similarly represents a domestic Russian endeavor to replace rockets with substantial foreign components (or even imported rockets, like the Ukranian Zenit rocket). This morning’s launch took place at Plesetsk Cosmodrome’s Site 35 launch pad. There has been speculation that this test flight, lifting off from the military-run spaceport north of Moscow, is the first sign of a shift from launching satellites at Kazakhstan’s Baikonur Cosmodrome.

The flight could also mean the end of Russia’s workhorse, the Proton rocket, which has been in service for close to 50 years and has celebrated 400 launches. There are no immediate plans to discontinue use of the rocket; however, in light of recent issues coupled with its toxic propellant, Russian officials are eager to move away from it.

On their website, Khrunichev describes the Angara as being a safe, environmentally-friendly alternative to the Proton rocket. The Angara relies on relatively non-toxic fuel in all but one of its upper stages, whereas the Proton relies heavily on nitrogen tetroxide and hydrazine — both extremely toxic.

Glad to see a success for the Russians. Maybe now people will be heading back out to the Moon. Their new spacecraft, which will replace Soyuz is soon to be completed too. Lets hope we can further work with Russia in our space endeavors. Mars is a long ways off.

After waiting SO many years to see this launch, I’m glad that the first launch of the Angara 5 appears to have been a success. I have said this elsewhere (and it is obviously a subjective opinion) but the Angara 5 strikes me as being one of the coolest looking rockets ever. Still, my all time fave has got to be the Saturn I SA-5 flight launched almost 51 years ago.

It’s interesting to see the 2 different philosophies between Russia using all liquid fueled boosters, and the US using a solid booster, liquid core hybrid combination. I’m curious about which one will end up being the better design as time goes by.

Considering the solid approach scales up far more easily into monsters like this;
http://www.astronautix.com/engines/325solid.htm
I would say the massive lift needed for any Human Space Flight- Beyond Earth and Lunar Orbit (HSF-BELO)will most likely come from pairs of boosters like the 325 solid for the lower stage. The core for such a 30 million pound thrust behemoth would be a cluster of very large hydrogen engines- much more powerful than the current RS-68A powerhouse. That is what it will take for any progress to be made in HSF. There is no cheap. Yes, I know my view of this is extremely unpopular thanks to the New Space mob.

It is very good to read the Russian success stories in the space area.