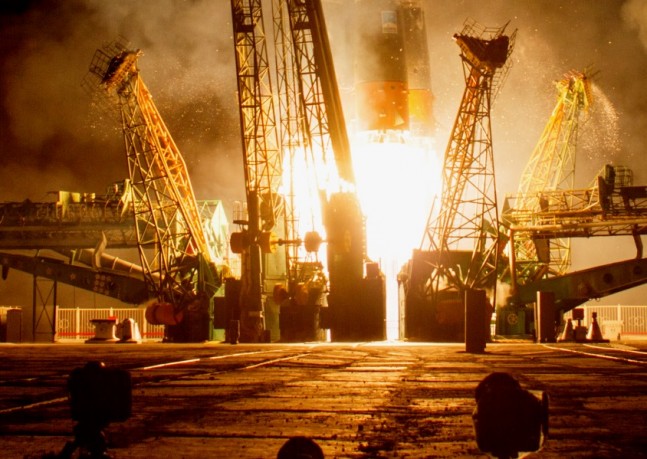 It takes a lot to be able to view Earth from an orbital perch – just ask Russia. The Russian Federal Space Agency or “Roscosmos” successfully launched the Resurs P2 Earth observation satellite atop a Soyuz-2 launch vehicle from the Baikonur Cosmodrone located in Kazakhstan at 1:55 p.m. EST (9:55 p.m. Moscow Time / 1855 GMT). This launch marked the latest in what has been a steady string of missions to lift off in the past few days alone. In the past four days, Russian boosters have arced into space three times.

The launch site for today’s flight was historic Pad 31 – which saw the very first R-7 intercontinental ballistic missile take to the skies during the Cold War era when Russia was still the Soviet Union. Pad 31 has seen an array of spacecraft begin their missions from this location. Over the intervening decades, the Meteor, Molniya, Pronoz, IRS, Kosmos and Resurs spacecraft – have all got there start from this historic location. The Soyuz-2 launcher and its precious cargo was rolled out to Launch Pad 31 at the Baikonur Cosmodrone on Dec. 24. Photo Credit: Yuzhny Space Center Press Service

During the 1970s and early 80s, crewed Soyuz missions were also launched from Pad 31. In 2006, the pad was renovated to accommodate the Soyuz-2 booster and has since been tapped to launch commercial missions with the Soyuz-FG/Fregat and Soyuz-2/Fregat variants of the venerable Soyuz launch system. Three years later, when the International Space Station began supporting a crews of up to six personnel, Russia’s Progress cargo vessels launched to the orbiting laboratory from Pad 31 atop a Soyuz-U rocket. Resurs P2 lifted off from Launcher 6 at Pad 31 and is one part of a broadband optoelectronic Earth observation system constructed by the Progress Rocket Space Center (RSC-Progress) on behalf of the Russian Federal Space Program. The spacecraft and its Soyuz-2 booster were moved out to the pad on Dec. 24.

The system is meant to provide real-time of near real-time high resolution images in a variety of spectral bands. These images will then be transmitted back down to Earth to ground stations. Several Russian customers, including Minprirody and EMERCOM, Rosselkhoz, Rosrybolovstvo, Roshydromet among others will then have access to these images.

This mission would not be possible without the Soyuz-2 booster that used its muscle to get Resurs P2 out of Earth’s gravity and on its way into the cold black of space. The Soyuz-2 has been tapped to carry out this service for an array of customers stretching from the military and defense to commercial and scientific missions. It could be argued that the Soyuz-2 is based off of the philosophy of; “If it’s not broken – don’t fix it.”

Some of the Soyuz-2 systems can trace their lineage all the way back to 1957 – with the R7 ICBM. Image Credit: TsENKI / Roscosmos

The Soyuz-2 booster can trace its lineage all the way back to the R-7 ICBM, the first of which, the R-7 Semyorka, lifted off almost 60 years ago, first launching on May 15, 1957. The Soyuz-2 is built by the Progress State Research and Production Rocket Space Center, along with Roscosmos and the Ministry of Defense (who serves as the booster’s primary customers).

Based off of the Soyuz-U rocket, which has been in service since 1973, these boosters are built by TsSKB-Progress and can handle payloads that run the range between light to medium-class.

The Soyuz-2 is capable of either launching payloads directly to orbit on its own – or via the use of a Fregat upper stage. The Soyuz-2 has marked improvements over its predecessors which include:

– Increased accuracy in terms of orbital insertion, range of orbit inclination increased (however, nominal drop zones have remained much the same)

– The Soyuz-2 can place payloads into an array of orbits which include circular, elliptical, sun synchronous, geotransfer, and geostationary orbits. When capped with a Fregat upper stage, the Soyuz-2 is even able to provide escape velocities and, in so doing, send spacecraft on planetary missions as well.

To upgrade the Soyuz-U into the Soyuz-2 version, the booster had new spray injectors, digital control systems, more precise instruments which provide more accurate trajectories as well as a new version of the rocket’s upper stage were installed. The third stage employs upgraded engines and the Soyuz-2 also has digital telemetry, trajectory measurement system and other improvements.

Prior versions of the booster had to be rotated as the rocket was unable to perform a roll maneuver after lifting off – this means that the Soyuz-2 can be launched from fixed platforms. The Soyuz-2 can either be launched from Pad-31 or from the Plestetsk Cosmodrone’s Launch Pad Launch Complex 43. Contracted out by Starsem, the rocket is also launched out of the Guiana Space Centre’s l’Ensemble de Lancement Soyouz (ELS ) located on the Northern Coast of South America.

Soyuz-2 has already replaced the Molniya booster and is set to replace the Soyuz-U and Soyuz-FG variants of the design. Today’s launch is just one part of a very week for Russian-made boosters.

On Tuesday, Dec. 23, Russia launched the heavy variant of its new Angara booster, just yesterday, Dec. 25 the Lotos-S spy satellite lifted off in the early morning hours. Also, a Proton rocket is planned to take off tomorrow, Dec. 27 and there is a Dnepr launch scheduled for Jan. 20 as well. These missions have run the gamut from classified spy satellites, commercial missions to test flights of new launch vehicles and signal an uptick in Russian space operations.

This article was produced using information obtained from TsENKI.com The cold conditions at LC-31 were evident from the ice that formed around the installation. Photo Credit: TsENKI / Roscosmos