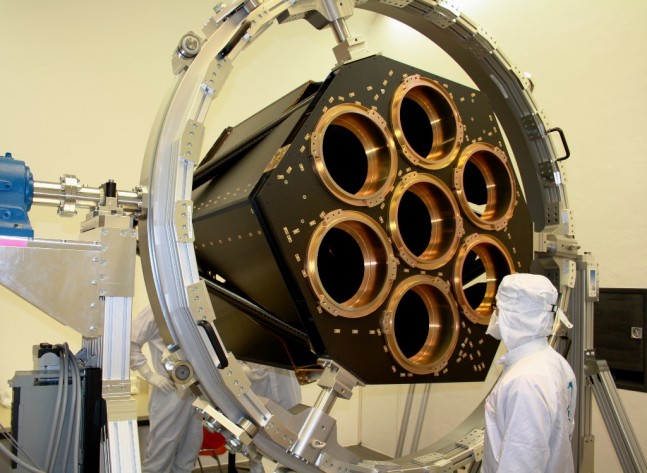 Russian aerospace company NPO Lavochkin has revealed that the Russian-German space observatory Spektr-RG, being built under the leadership of the Russian Space Research Institute (IKI ), is taking shape. At present, mission planners are hoping to be able to launch the spacecraft sometime between the end of 2016 or beginning of 2017.

“The mission is expected to be launched at the end of 2016 or beginning of 2017,” the company said in a statement, after a meeting of designers and manufacturers who participated in the development of the space-based observatory.

The Spektr-RG astrophysics observatory includes five telescopes spanning the spectrum range from the far ultraviolet to the hard X-ray, making the craft an all-sky monitor. The observatory will study interplanetary magnetic fields, galaxies, as well as more exotic objects such as black holes. The spacecraft will focus its highly-sensitive instruments on a dedicated region of the sky and perform follow-up pointed observations of selected targets. The satellite will be based on Lavochkin’s Navigator bus. The 5,291 lbs (2,400 kg) observatory is expected to be launched on a Zenit-SB rocket with Fregat or Fregat-SB upper stage from Baikonur Cosmodrome in Kazakhstan. The spacecraft will be put in a halo orbit around the Lagrange point L-2. Spektr-RG is expected to function until 2024. It will need around three months to reach its final destination, where it is expected to spend at least four years circling L-2 in a 25,855 mile (40,000-kilometer) ellipse on a mission to conduct a global survey of the sky. The mission’s three following years would be spent observing particular objects. If successful, the Spektr-RG would likely be the first Russian spacecraft reaching any of the Lagrange points.

L-2 would be an ideal spot for the observatory. This particular patch of the celestial “neighborhood” provides “quiet” gravitational and magnetic conditions for the satellite without many disturbances and no traces of thin air slowing down the spacecraft in the low-Earth orbit (LEO).

The development of the mission started in 2005. It is a revived, redesigned version of the earlier Spektr-RG (SXG) mission that was cancelled in 2002. The launch date of Spektr-RG has already been postponed several times. The original plan was to launch the satellite in 2012, onboard the Soyuz-2/Fregat booster.

On the Russian side, the biggest obstacle causing delays was presented by an X-band radio communications system for the spacecraft. NPO Lavochkin was considering switching from a movable high-gain antenna on the spacecraft to a less-capable medium-gain antenna.

In Germany, developers hit a major problem during the integration of around 60 circuit boards with up to 30,000 individual components on the eROSITA telescope. The delivery of flight versions of German eROSITA and ART-XC telescopes was set for July-October 2015.

Once it is sent to orbit, the Spektr-RG observatory will be another Spektr-class space observatory. The successful launch of the project’s first spacecraft (Spektr-R) was made on July 18, 2011.