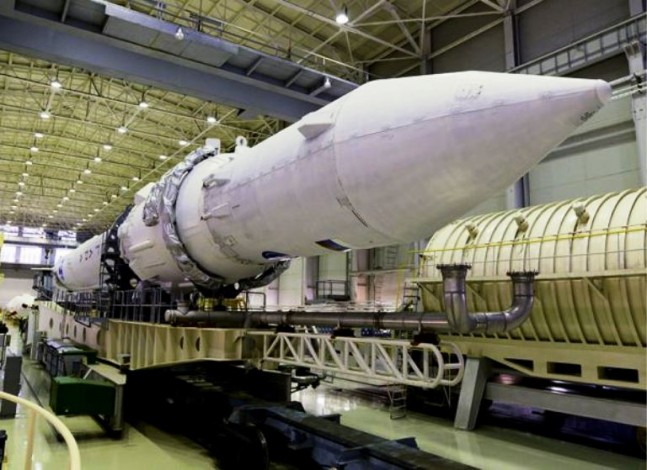 Russia’s Federal Space Agency (Roscosmos) will not decide on a leading designer of a new super-heavy booster rocket until the end of this year, Roscosmos head Oleg Ostapenko said on Friday, September 26. A competition for the powerful launch vehicle has not been held yet, he said.

“We’ll hold a conciliatory meeting shortly to decide what (of the super-heavy booster) should look like, where the work will be done and who is to lead the way,” he said. Three leading Russian enterprises – the Progress design bureau, the Energia Rocket and Space Corporation, and the Khrunichev State Research and Production Space Centre – are now designing and developing the super-heavy booster. Roscosmos chief also discussed future launches from Vostochny cosmodrome and cooperation with U.S.

Ostapenko revealed that the construction of the launch site for the newest Angara carrier rocket, at the Vostochny spaceport in the Russian Far East will begin before the end of this year. “This will be the Angara rocket. Everything has been spelled out. We’re working on that basis,” he said.

Roscosmos’ head said that other carrier boosters would be launched from the Vostochny space facility as well. “We don’t rule out that more powerful boosters will be launched.”

Media reports said earlier that the creation of a super-heavy missile system would be included in the federal space program for 2016-2025. Roscosmos has requested more than 200 billion rubles (over $5 billion) to create the needed infrastructure at the Vostochny space facility.

According to earlier reports, the first manned launch from Vostrochny Cosmodrome is scheduled for 2018.

Ostapenko also told reporters that NASA is ready to increase the number of joint space experiments with Russia. “Today our American colleagues have offered to widen cooperation regarding the joint experiments in space”, he said, adding that most of the experiments on the International Space Station (ISS) during the forthcoming year will be conducted with close participation of Russian and U.S. space crews.

In Early April of 2014 NASA announced suspending space cooperation with Russia, except for ISS projects, due to the political crisis in the Ukraine; however, by the end of the month NASA’s head personally assured his Russian counterpart that no space projects would be suspended and Russia-US space ties remain strong enough. In May, Russia’s Deputy Prime Minister, Dmitry Rogozin, stated that Russia would end U.S. cooperation on the International Space Station, close GPS stations within Russia and would not allow RD-180

Speaking about Yelena Serova, the first Russian woman to crew the ISS in the past 20 years, Ostapenko announced that he is not ruling out that a crew consisting of women could be sent to the ISS in the future. “I hope that women will join the crew, moreover, we are not limiting strictly whether one woman in six months or one in ten years should fly. We make an assessment due to the person’s professionalism and ambition,” he said. “If there is a big rush in women willing to fly to space, we will support this idea.”

This article originally appeared on Astro Watch and can be viewed here: Super Heavy