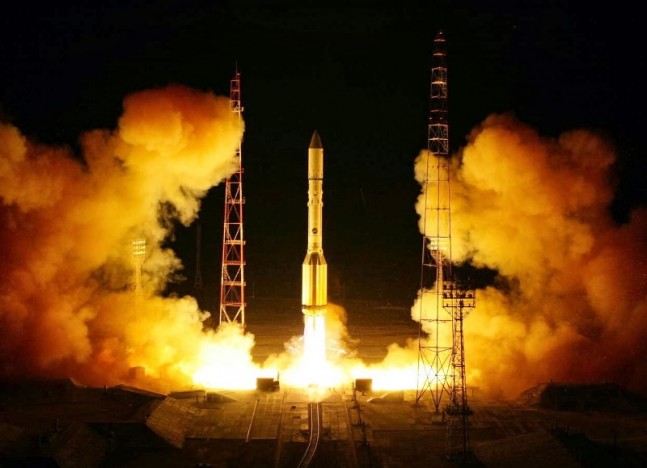 Russia’s Proton-M carrier rocket, which lifted off from Baikonur space launch facility in Kazakhstan early on Sunday, has put the Briz-M rocket booster and the Russian relay satellite Luch in the interim orbit, the press service of the Russian Space Agency (Roscosmos) reported. The rocket lifted off as scheduled on Sept. 28, 2014, at 00:23 Moscow Time (4:23 p.m. EDT on Sept. 27). The Proton launch vehicle carried a classified payload known as Olymp (“Olympus”) as well as Luch (“Beam”), which belongs to the Russian Ministry of Defense.

“The Russian satellite is expected to enter the final calculated orbit at 09:26 Moscow time (on Sunday),” the Russian press service said. The Luch spacecraft is a new satellite in the Luch Multifunctional Relay System which is being developed under the 2006-2015 Russian federal space program.

The Luch relay system is intended to provide the Russian segment of the International Space Station (ISS ); low-orbiting space devices; boosters and upper stages with communication with ground-based facilities. This is similar to NASA’s Tracking and Data Relay Satellites or “TDRS.” The previous Luch spacecraft – Luch-5B – was successfully put in orbit on April 28, 2014. It also utilized the Proton-M / Briz-M for its ride to orbit. Sunday’s mission was previously scheduled to lift off at the latter half of May 2014. However, following the loss of another Proton rocket on May 16, it was postponed to July 8. On Aug. 26, Roscosmos announced that specialists from GKNPTs Khrunichev had been installing thermal protection layers on the Briz-M stage at Site 92-50 in Baikonur, while the center’s personnel was configuring launch pad at Site 81 for the upcoming mission. What information has been released about the Luch spacecraft states that it was developed at ISS Reshetnev.

On Sept. 4, Roscosmos reported that the launch vehicle, the upper stage, the payload fairing and the spacecraft had undergone autonomous checks and were all ready for integration. The fully-integrated assembly was completed by September 19. Two days later, the launch vehicle and its precious cargo were moved to a fueling station for loading the upper stage with propellant and pressurized gases.

The Proton-M was then rolled out to the launch pad No. 24 at Site 81 on Sept. 23. Several hours before an expected liftoff, Roscosmos announced that the State Commission overseeing the launch had given the green light to begin fueling of the vehicle with propellants.

At the same time, the launch contractor removed information about the scheduled time of the launch from its website and did not allow a public broadcast of the liftoff.

The Proton’s recent track record might have given Russian officials with pause as to publicly broadcasting the flight.

On Aug. 23, 2013, a Proton rocket with several GLONASS (Russia’s version of the Global Positioning System) cartwheeled across the sky before slamming into the ground in a massive fireball. It was later determined that a sensor emplaced upside down doomed the $1.3 billion mission.

Just eight months later, a Proton-M booster carrying the Express-AM4P communication satellite was lost some 545 seconds into the flight. The experts investigating that accident said it was caused by disintegration of a bearing assembly in the turbo pump of the Proton’s third-stage engine. This article originall8y appeared on Astro Watch and can be viewed here: Luch