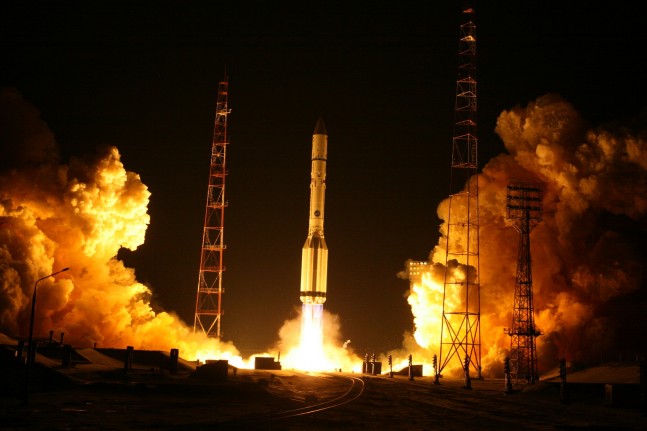 Continuing a launch heritage of more than 400 flights, a Proton M rocket successfully lofted the Express-AM7 satellite to geostationary transfer orbit. The picture perfect launch of the Proton Breeze-M (Briz) version of the booster lifted off from the Baikonur Cosmodrome at 6:05 EDT (22:05 UTC).

The Express-AM7 was constructed by EADS Astrium for the Russian Satellite Communications Company (RSCC) using the Eurostar E3000 platform as a base. After some modifications for the required orbital design, the satellite has a total mass of 12,610 lbs (5,720 kg). The Express-AM7 has a total of 62 active transponders: 24 operating in the C band of the electromagnetic spectrum, 36 in the Ku band, and 2 in the L band. The satellite is expected to have a service life of approximately 15 years. The spacecraft is designed to provide digital television and radio broadcasting capabilities across Russia. It is also designed to provide mobile services for the government including telephony, data transmission, teleconferencing and internet access. Illustration of the Express AM7 satellite. Image Credit: Airbus Defense and Space

The Proton M, along with the upper Breeze stage, successfully placed the Express-AM7 into a transfer orbit in preparation for the transfer to Geostationary orbit. The process required several restarts of the Breeze upper stage to coordinate the orbital insertion. Proton launch vehicles and Breeze-M upper stages are designed and built by Khrunichev State Research and Production Space Center (Khrunichev) in Moscow, the majority owner of International Launch Services (ILS ). The vehicles are transported to the Baikonur launch pad horizontally and lifted to the vertical position shortly before launch. Khrunichev has direct oversight and control of up to 70% of all Proton manufacturing, from suppliers to manufacturers, due to recent consolidation of Russian space operations.

The first Proton rocket, originally design for use as an ICBM was launched in 1965, making the Proton one of the most successful launch vehicles ever built. The latest version of the Proton can carry up to 7,100 lbs (3,220 kg) to geostationary orbit. It can place up to 49,000 lbs (22,226 kg) in low Earth orbit with a 51.6-degree inclination, the orbit of the International Space Station (ISS).

Launch operations started about 11 hours and 30 minutes before the scheduled launch time with the activation of the Briz-M upper stage for final testing. Some six hours before the launch all three stages of the Proton rocket were filled with approximately 1,371,275 lbs (622,000 kg) of hypergolic (fuels that ignite spontaneously when brought in contact with one another) propellants, a process which took about three hours. The Proton booster has seen several failures during its history – which stretches back to the mid 1960s. Photo Credit: Roscosmos

The launch pad was re-opened after fueling was complete and the final hands-on work began including removal of protective covers and close-out of the Proton-M rocket and its Service Structure. The Service Structure was pulled back to a safe distance on hour before liftoff, a practice easily recognizable to those who monitor similar flights around the globe.

The automated countdown began at T-5 minutes. The propellant tanks were pressurized during the terminal countdown and the rocket transferred to internal power.

The Proton-M’s six first stage engines roared to life 2.5 seconds before liftoff, providing more than a million kilograms (10 MN) of thrust. The rocket followed a standard ascent profile, starting with a short vertical ascent before completing a roll maneuver to line up with its ascent trajectory.

The rocket passed maximum dynamic pressure (Max-Q) 62 seconds after launch. The first stage engines shut down at T+1:59 and the 4 engines of the second stage ignited at the moment of stage separation to continue the Proton-M’s ascent.

The second stage engines continued to burn until approximately T+5:27 into the flight. The Proton’s third stage separated from the second stage by igniting its vernier engine before the RD-0213 main engine began its four minute burn.

The Payload fairing was jettisoned at  T+5:47 and the third stage main engine continued to burn until T+9:31. The vernier engine cutoff at T+9:42 and the Briz-M upper stage separated from the third stage three seconds later.

The Proton’s first stage is comprised of a central tank which carries nitrogen tetroxide (the oxidizer). Six propellant tanks encircle this central tank, each of them contain unsymmetrical dimethylhydrazine (the Proton’s fuel). Each of the outboard tanks has an RD-276 rocket engine at its base. These engines provide the initial “push” that sends the rocket and its precious cargo out of Earth’s gravity well. The first stage’s six engines give the Proton-M an initial thrust of some 9,942 kiloNewtons. Each engine is some 9 feet (2.72 meters) in length and 5 feet (1.5 meters) in diameter.

This element of the Proton-M uses nitrogen tetroxide and unsymmetrical dimethylhydrazine as fuel.

The second stage draws its power from three RD-0210 engines along with a lone RD-0211 rocket engine (essentially an RD-0210 fitted with a gas generator heat exchanger). These engines deliver an estimated 2.4 megaNewtons of thrust. Each engine (RD-210 and RD-0211) measures 8 feet (2.33 meters) in length and 5 feet (1.47 meters) in diameter.

The rocket’s third stage is the section that delivers the payload to its intended destination. Much like the rocket’s other stages, it uses nitrogen tetroxide and unsymmetrical dimethylhydrazine as fuel. It is outfitted with a RD-0213 rocket engine which grants some 583 kiloNewtons of thrust. The RD-0213 is similar in design to the RD-0210. The third stage is also equipped with an RD-0214 rocket engine that has four gimbaled nozzles to help direct both the stage and its precious cargo to its orbital position.