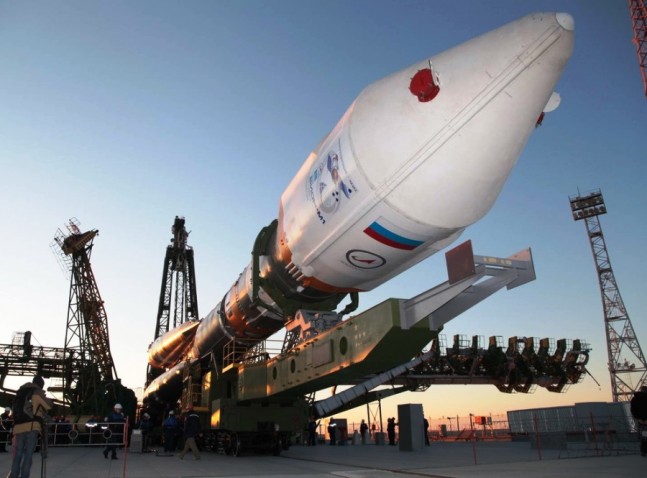 Early on Christmas morning in Russia, a Lotos-S Kosmos-series satellite launched aboard a Soyuz-2-1b rocket from the Plesetsk cosmodrome, site 43, in the town of Mirny. It left the pad at about 10 p.m. EST Christmas Eve (300 GMT Christmas Day) and was not broadcast live, like many launches for VKO, the Aerospace Defense Forces branch of Russia’s military.

The Lotos-S satellite payload is an electronic intelligence (ELINT) satellite; specifically, the prototype version of the Lotos component of the Liana system, a two-part satellite system that was devised in the 1990s and has been in slow development ever since. It is meant to succeed the Tselina-2 satellites, which were designed to detect and collect information on radio signals, and the US-PM system, which also used an ELINT system, specifically to track the electronics of naval vessels. Liana’s two-part design includes the Lotos satellites, which take care of the ELINT part, and the Pion satellites, which will track radio signals from ships. Together, they are intended to give Russia more insight into developments in foreign countries, particularly military-related. The first Lotos-S launch occurred in November of 2009, on a Soyuz-U rocket, and no Pion satellites have yet been put into orbit.

According to NASASpaceFlight, “The Lotos-S satellites are stripped-down versions of the Lotos design, intended to allow in-orbit testing and provide an initial operational capacity ahead of fully operational satellites being deployed.”

KB Arsenal, or Arsenal Design Bureau, is the company tasked with developing both satellite designs. Based in Saint Petersburg, Russia, KB Arsenal was a cannon foundry when it was founded in 1711. They switched to intercontinental ballistic missile (ICBM) design between 1960 and 1980, and then turned to space research. TsSKB-Progress, or Progress State Research and Production Space Centre, developed the Yantar bus used on the Lotos-S satellite. TsSKB-Progress works under the jurisdiction of Roscosmos, is based in Samara, Russia, and is perhaps best known for the development and manufacturing of the Soyuz-FG and Soyuz-U rocket series.

The Yantar bus has been around since the 1960s and, according to Spaceflight 101, provides “all basic spacecraft functions such as power generation and storage, propulsion, attitude determination and control, data and command handling, and communications.”

As for the launch vehicle, the 1b configuration of the Soyuz-2 rocket is essentially a modification of the Soyuz-U configuration, with a digital control panel. Like other Soyuz rockets, it has somewhat unusual staging. Rather than a first stage that is jettisoned in its entirety, the Soyuz has what is called a “core” stage with four liquid booster rockets strapped to it. The four boosters, each of which is powered by a four-chamber RD-107A engine, are typically considered the first stage. However, the core stage, considered the second stage, also ignites seconds before liftoff, and it continues to burn once the boosters have been jettisoned.

This core stage uses an RD-108A engine, which bears similarities to the RD-107A engines used in the boosters. Both of these are manufactured by NPO Energomash, like the RD-180 noted for its use on the first stage of each Atlas V rocket.

After a little under five minutes, the second stage engine shut down and the third stage ignited, after which the core (or second) stage was jettisoned. This is different from the order Americans usually see with rocket launches at home, where the previous stage is jettisoned before the next stage begins its burn.

The third stage on this version of the Soyuz-2 is the Improved Block-I third stage, with the RD-0124 engine manufactured by TsSKB-Progress and designed by Chemical Automatics Design Bureau (also called KB Khimavtomatika or KBKhA).

Some Soyuz rockets do require a further upper stage for placing the payload more precisely, but because this Lotos-S satellite will be placed directly into orbit after launch, no additional stage is required. The expected initial orbit of the spacecraft is around 125 miles by 560 miles (200 by 900 kilometers) at an inclination of 67.1 degrees. After a few days, it is expected that the satellite will circularise its orbit to around its 560-mile apogee.

The Soyuz rocket family is well known for being the launch vehicle for the Soyuz spacecraft. Both the rocket and the capsule are currently the only means used for taking astronauts to and from the International Space Station, a circumstance that NASA is aiming to change with the Commercial Crew Transportation Capability (CCtCap) contracts.

Two more Russian launches are scheduled for the final days of 2014, both from Baikonur Cosmodrome. The first, on Dec. 27, is the Resurs-P 2 Nuklon satellite. The second, set for Dec. 28, is the previously-delayed Astra-2G satellite.

While it wasn’t mentioned in the article, the Resurs P2 is also based on the Yantar-bus just like the Lotos-S. Interestingly, the first ELINT satellites launched by the US over half a century ago were based on the proven Vanguard satellite.

Good article. As for a replacement to take astronauts to the ISS; we would be better off ditching the ISS and spending the money on the Moon. 40 years of LEO space stations are enough.