Rocket Lab is going to attempt to catch the first stage of its next Electron rocket with a helicopter as it returns from space under a parachute.

The company is set to fly its mission, “There and Back Again” as early as 6:35 p.m. EDT (22:35 UTC) April 29, 2022. Following the first stage completing its job in the ascent, it’ll continue its parabolic trajectory and deploy a parachute where a helicopter will attempt to catch it before it reaches the ocean. 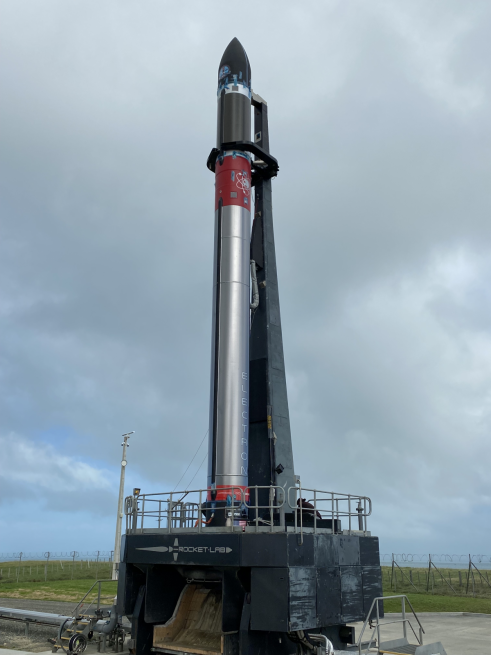 For this flight, a shiny-looking thin layer of thermal protection was added to Electron’s first stage to protect it from the heat of reentry before the company’s helicopter can catch the booster. Credit: Rocket Lab

“We’re excited to enter this next phase of the Electron recovery program,” Rocket Lab founder and CEO Peter Beck said in an April 5 statement.

This flight of Electron is slated to take place at Rocket Lab’s New Zealand Launch Complex 1A and it will be the company’s 26th orbital mission.

The aptly-named “There and Back Again” mission looks to deliver 34 satellites into orbit for varying customers. That will be accomplished using the second stage of the Electron rocket.

To catch the first stage, the operation calls for a custom Sikorsky S-92 helicopter to station itself approximately 150 nautical miles (278 kilometers) off the New Zealand coast ahead of liftoff, where it will be positioned to capture the stage several minutes after launch.

The rocket booster is equipped with a drogue parachute that will deploy 8 miles (13 kilometers) above the Pacific Ocean and fully open at an altitude of 3.7 miles (6 kilometers) according to Rocket Lab representatives, slowing the booster to 22 miles per hour (35 kilometers per hour).

Once at this speed, the Sikorsky S-92 helicopter is expected to swoop in with a specialized hook and “grab” the parachute line, hauling the first stage back to land.

Once back on Earth, engineers plan to analyze the rocket booster for possible reusability.

“Trying to catch a rocket as it falls back to Earth is no easy feat,” Beck said. “We’re absolutely threading the needle here, but pushing the limits with such complex operations is in our DNA. We expect to learn a tremendous amount from the mission as we work toward the ultimate goal of making Electron the first reusable orbital smallsat launcher and providing our customers with even more launch availability.”

While we await ideal weather conditions for #ThereAndBackAgain, the recovery team has been conducting capture tests using a stage 1 mass simulator. Our pilots make this look easy! 🚀🪂🚁 pic.twitter.com/1r6PZvzBni

Tagged: Electron Lead Stories Rocket Lab There and Back Again