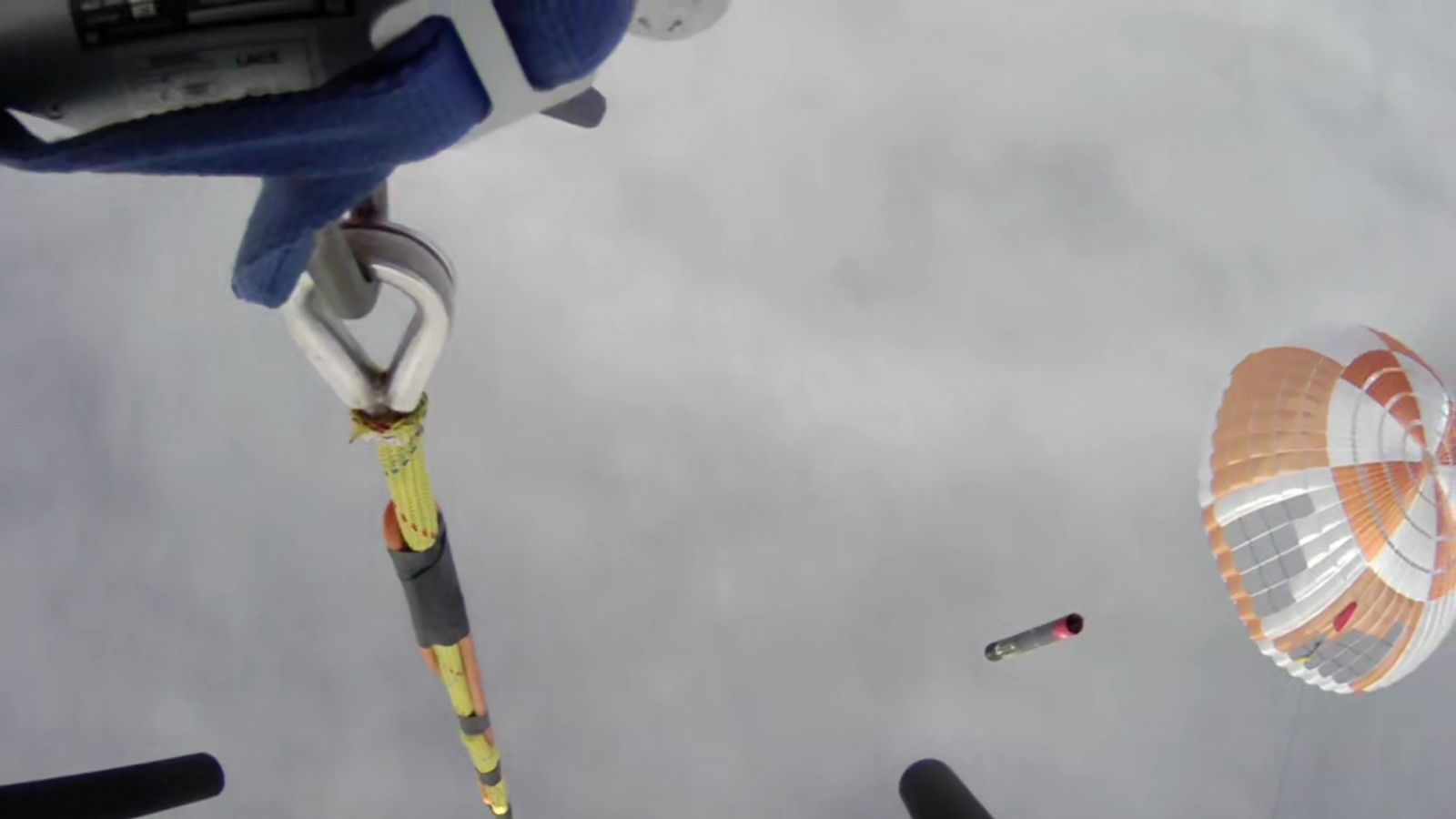 Looking down from the recovery helicopter, the descending Electron rocket can be seen moments before its brief capture. Credit: Rocket Lab

A Rocket Lab helicopter successfully caught a returning Electron rocket booster as it parachuted back to Earth, only to release it moments later.

This was Rocket Lab’s 26th Electron rocket mission, named “There And Back Again. It was the first time the company attempted to catch one of its rocket’s first stages as it parachuted back toward Earth.

Liftoff of the 59-foot-tall (18-meter-tall) Electron rocket took place at 6:49 p.m. EDT (22:49 UTC) May 2, 2022, from pad A at the company’s New Zealand launch site — Launch Complex 1. About 2.5 minutes later, the first stage of the rocket separated from the second stage, which finished the process of orbiting its 34 satellite payloads.

The first stage continued on a parabolic trajectory back toward Earth. Once low enough in altitude, a drogue parachute deployed, followed by a second parachute, to slow the stage down to ultimately be caught by a Sikorsky S-92 helicopter.

“Incredible catch by the recovery team, can’t begin to explain how hard that catch was and that the pilots got it,” Rocket Lab CEO Peter Beck tweeted after the completion of the mission. “They did release it after hook up as they were not happy with the way it was flying, but no big deal, the rocket splashed down safely and the ship is loading it now.”

To date, most of Rocket Lab’s Electron vehicles have been expendable, falling back to Earth after each launch of small satellites to space. 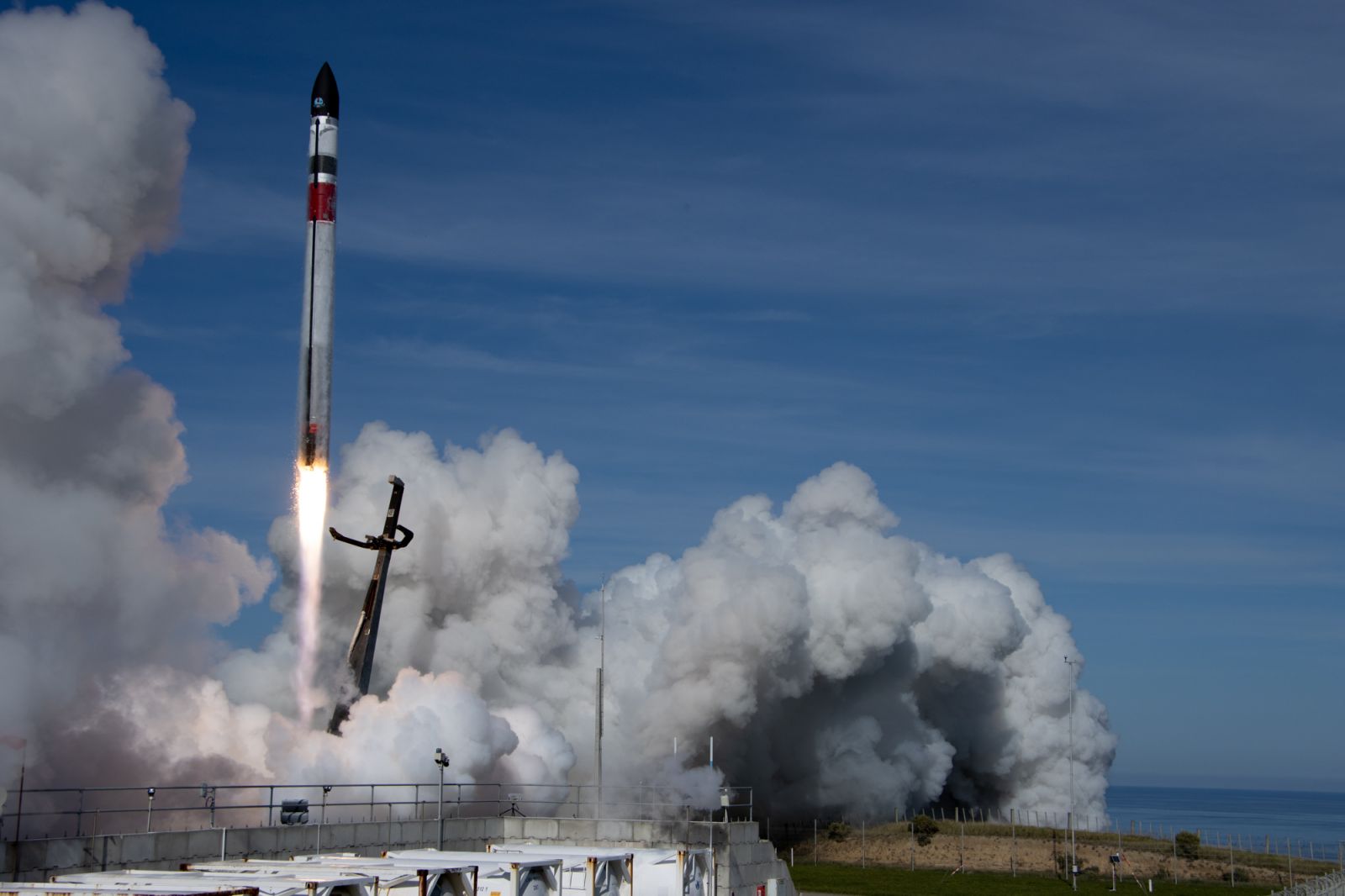 The company has previously recovered three Electron first stages after they parachuted into the ocean, but those were testing various capabilities and understanding how the rocket behaves during reentry and under a parachute.

For “There And Back Again,” the helicopter pilots were planning on taking the caught stage to a nearby recovery vessel in the Pacific Ocean. However, once the stage was released, it parachuted to the water where the recovery vessel itself fished the stage out of the water.

“Bringing a rocket back from space and catching it with a helicopter is something of a supersonic ballet,” Beck said. “A tremendous number of factors have to align and many systems have to work together flawlessly, so I am incredibly proud of the stellar efforts of our Recovery Team and all of our engineers who made this mission and our first catch a success. From here we’ll assess the stage and determine what changes we might want to make to the system and procedures for the next helicopter catch and eventual re-flight.”

Not all Electron missions will be recovered. The additional flight hardware needed for a recovery adds extra weight and that affects the payload capacity to space. Additionally, some trajectories are not compatible with retrieval.

It’s unknown when the next Rocket Lab recovery attempt will be. However, one of the next missions for the company is expected to be to send NASA’s Cislunar Autonomous Positioning System Technology Operations and Navigation Experiment — CAPSTONE — to a special orbit around the Moon.

CAPSTONE is expected to act as a pathfinder for NASA’s planned Lunar Gateway outpost, which will act as a way station for astronauts on their way to the Moon under the Artemis program.

This is what it looked like from the front seats. pic.twitter.com/AwZfuWjwQD