ESA-provided components for Orion – may be produced by Lockheed-Martin 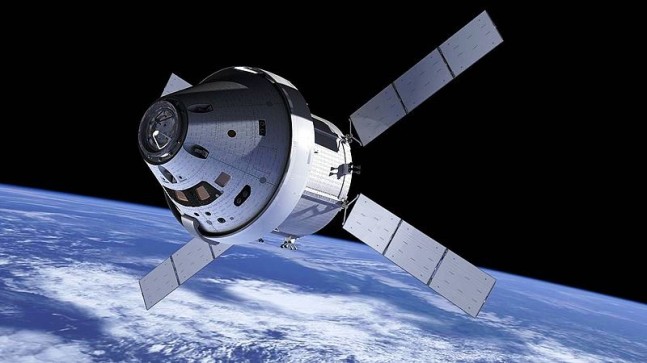 Artist's conception of the Orion spacecraft including the service module. Image Credit: NASA

The Service Module that will be used on NASA’s next generation crewed spacecraft, Orion, which is designed to take astronauts back to destinations beyond low-Earth-orbit (LEO), may be getting some of its parts from Lockheed Martin Space Systems (LMCO) in Denver. This would be a departure from current plans where the European Space Agency (ESA) which is constructing the Service Module (while Orion itself is built by LMCO) for the first crewed flight of Orion – Exploration Mission 1 (EM-1). EM-1 is currently planned to take place in 2017. ESA’s prime contractor, Airbus Defense and Space or “ADS” is the company which is producing the SM for this important flight. Orion has gone under an array of changes since being conceived in nearly a decade ago. Image Credit: NASA

Larry Price, Lockheed’s Orion deputy program manager, has cited financial reasons why ADS can no longer be the sole provider of parts for the new modules. Instead, out of necessity, it will likely be a combination of ADS and Lockheed Martin supplying the needed hardware. At best, it was estimated that ADS could only provide “one and a half” service modules for EM-1 and subsequent missions. Having an additional supplier would also lessen the financial burden on ADS. It may even result in lower overall prices for the modules, which of course is a good thing in these times of tight budgets.

Price told Space News, “They (ADS) may not complete both of them, depending on funding.” By using American suppliers, “We think we can drive Europe’s cost down so they can deliver two complete service modules.” He adds, “If we use common parts, they can be lower price.”

As mentioned Orion’s current service modules are based on the design of ESA’s Automated Transfer Vehicle (ATV) which ESA uses (currently there is only one more ATV flight planned, that of the Georges Lemaitre. set to launch on July 6, 2014) to deliver cargo to the International Space Station. There are different versions of Orion which will continue to be developed, tested and validated prior to actual crews riding an Orion aloft. Image Credit: NASA

The components provide the main power and propulsion components for Orion. These critical elements support the crew module from launch but also provide propulsion capability for orbital transfer, attitude control, and high altitude ascent aborts. They also provide water, oxygen, electricity and temperature control for the astronauts on board.

The service modules are essentially cylindrical in shape, with a diameter of 16 feet, 6 inches (5.03 meters) and an overall length (including the spacecraft’s thruster) of 15 feet, 8 inches (4.78 meters).

NASA is currently planning an unmanned precursor flight of Orion, the Exploration Flight Test 1 (EFT-1), is scheduled for 2017, with the first crewed flight to launch in 2021 according to current schedules. If everything goes according to plan, the first flight test article will be ferried aloft via a  United Launch Alliance (ULA) Delta 4 Heavy rocket in December of this year.

Orion is described as being the first NASA spacecraft that is capable of taking astronauts beyond the orbit of Earth since the Apollo era. NASA plans to have crewed versions of Orion launch atop NASA’s new heavy-lift booster, the Space Launch System – or “SLS.” While Orion might resemble the old Apollo capsules, it is larger and far better equipped with modern technology.