Stunning new video of catastrophic loss of Antares and Cygnus 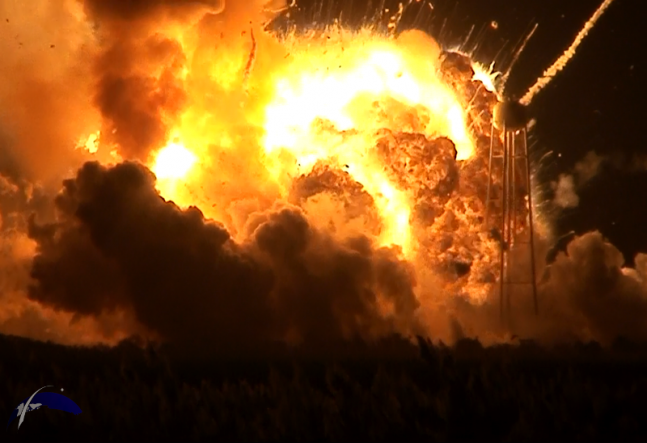 One of SpaceFlight Insider’s newest members, JD Taylor began his tenure with our firm with the launch of Orbital Sciences Corporation’s Antares rocket and its payload of the SS Deke Slayton, Cygnus, spacecraft bound for the International Space Station with about 5,000 lbs (2,268 kg) of cargo. It would never make it. At approximately 12 seconds into the flight – something went terribly wrong – and the rocket exploded into a massive fireball falling back down to Wallops’ Pad-0A below.

Taylor obeyed the frantic commands of the Wallops staff to run to the bus – leaving his equipment where it stood. The video below – shows the awe-inspiring power of the loss of one of these launch vehicles – from a mere 2.11 miles (3.39 kilometers) away.

Even more jarring than the frantic instructions of NASA employees and volunteers ordering the journalists on hand to get to the buses – is, for the uninitiated, the impact shockwave of the explosion’s tremendous sound. It was so loud, that it visibly and violently shakes the cameras.

NASA issued the following statement on Wednesday, Oct. 29 regarding the mishap – and the investigation to determine the root cause of the disaster:

“I want to praise the launch team, range safety, all of our emergency responders and those who provided mutual aid and support on a highly-professional response that ensured the safety of our most important resource — our people,” said Bill Wrobel, Wallops director. “In the coming days and weeks ahead, we’ll continue to assess the damage on the island and begin the process of moving forward to restore our space launch capabilities. There’s no doubt in my mind that we will rebound stronger than ever.”

The initial assessment is a cursory look; it will take many more weeks to further understand and analyze the full extent of the effects of the event. A number of support buildings in the immediate area have broken windows and imploded doors. A sounding rocket launcher adjacent to the pad, and buildings nearest the pad, suffered the most severe damage.

At Pad 0A the initial assessment showed damage to the transporter erector launcher and lightning suppression rods, as well as debris around the pad.

The Wallops environmental team also is conducting assessments at the site. Preliminary observations are that the environmental effects of the launch failure were largely contained within the southern third of Wallops Island, in the area immediately adjacent to the pad. Immediately after the incident, the Wallops’ industrial hygienist collected air samples at the Wallops mainland area, the Highway 175 causeway, and on Chincoteague Island. No hazardous substances were detected at the sampled locations.

Additional air, soil and water samples will be collected from the incident area as well as at control sites for comparative analysis.

The Coast Guard and Virginia Marine Resources Commission reported today they have not observed any obvious signs of water pollution, such as oil sheens. Furthermore, initial assessments have not revealed any obvious impacts to fish or wildlife resources. The Incident Response Team continues to monitor and assess.

Following the initial assessment, the response team will open the area of Wallops Island, north of the island flagpole opposite of the launch pad
location, to allow the U.S. Navy to return back to work.

Anyone who finds debris or damage to their property in the vicinity of the launch mishap is cautioned to stay away from it and call the Incident
Response Team at 757-824-1295.

Further updates on the situation and the progress of the ongoing investigation will be available at: http://www.orbital.com