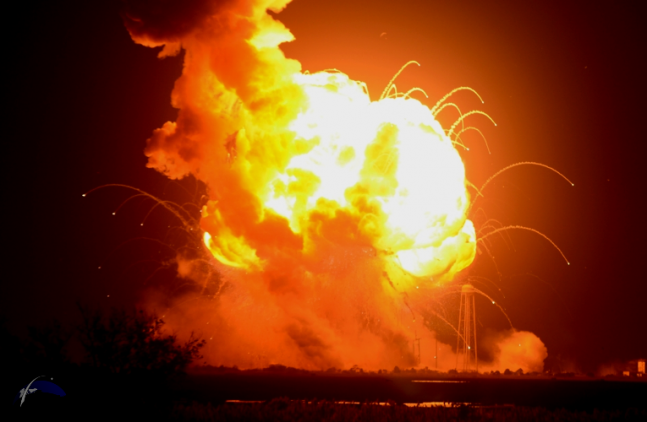 In response to Tuesday’s loss of the Antares rocket carrying the SS Deke Slayton Cygnus cargo craft, the rocket’s manufacturer, Orbital Sciences Corporation, has issued a statement that it will stop using Aerojet Rocketdyne’s AJ-26 engine. The company did not stop there, however. In an effort to fulfill its obligations under the $1.9 billion Commercial Resupply Services (CRS) contract it has with NASA,  Orbital has announced it will seek out a different launch vehicle to ferry Cygnus to orbit for the remaining contracted missions by 2016.

As many industry experts have posited, it appears that the 40-year-old AJ-26 rocket engines that Antares used in its first stage – appear, at this early stage of the investigation to be the cause of the accident. Orbital reinforced these views by issuing the following statement:

While the work of the AIB continues, preliminary evidence and analysis conducted to date points to a probable turbopump-related failure in one of the two Aerojet Rocketdyne AJ26 stage one main engines. As a result, the use of these engines for the Antares vehicle likely will be discontinued. Orbital has announced that it will no longer use the Aerojet Rocketdyne AJ-26 rocket engine in Antares’ first stage. Photo Credit: Joel Kowsky / NASA

Essentially, the use of the AJ-26 on Antares have come to an end and the Dulles, Virginia-based company will accelerate its plans to incorporate a new, as yet unnamed engine into the rocket’s first stage – by 2016.

“Orbital is taking decisive action to fulfill our commitments to NASA in support of safe and productive operations of the Space Station. While last week’s Antares failure was very disappointing to all of us, the company is already implementing a contingency plan to overcome this setback. We intend to move forward safely but also expeditiously to put our CRS cargo program back on track and to accelerate the introduction of our upgraded Antares rocket,” said Mr. David W. Thompson, Orbital’s Chairman and Chief Executive Officer.

Before this happens however, Orbital has announced that it will launch one or two flights to the International Space Station (ISS) on a “non-Antares” launch vehicle sometime within the 2016 timeframe. This scenario is possible due the design of Cygnus, which allows it to be flown on an array of boosters. This could serve to mitigate the risk of Orbital defaulting on its agreement to conduct 8 resupply runs to the ISS.

When Antares’ flight went off its predicted flight path and began to fall back to the launch pad, its flight termination system was activated – creating a massive fireball which enveloped Pad-0A.

As such, Pad-0A, located at the NASA Wallops Flight Facility’s Mid-Atlantic Regional Airport will likely be unable to support launches of the new iteration of Antares until at least the early part of 2016. Details on this new engine are in rather short supply, although it has been stated that, like the AJ-26, it also will be Russian-made. “We very much appreciate the tremendous support Orbital has received from NASA and Virginia’s MARS commercial spaceport team over the last seven years on our Antares rocket and CRS cargo programs. We look forward to working closely with them to quickly recover from last week’s setback,” Thompson said.

Orbital has initiated its own investigation into the cause of the mishap and has stated that a “significant” amount of debris from both Antares and Cygnus had been recovered.

The company has expressed the hope that it can still fly the remaining six flights required under the contract that Orbital signed with NASA back in November of 2008. According to Orbital, there will be no additional cost to NASA and only slight modifications will need to be made to the cargo manifest. “Exact financial impacts to Orbital will depend on which of several specific options for near-term launches is selected, but they are not expected to be material on an annual basis in 2015. In all cases, no significant adverse effects are projected in 2016 or future years, in part because the cost of the Antares propulsion system upgrade was already part of our internal investment plan during that time,” he added.

The CRS contract requires Orbital to conduct eight resupply flights to the space station – by 2016.

Orbital rolled out the first Antares booster to the Pad-0A in October of 2012. It conducted a test fire the following month and carried out the first flight of the rocket on Apr. 21 2013. Antares only carried out a test payload during that mission, which was meant to mimic a Cygnus. spacecraf.

Five months later in November 2013, Antares rook to the skies with an actual Cygnus spacecraft, dubbed the G. David Low which successfully traveled to the ISS.

The G. David Low was followed in fairly rapid succession by the Gordon Fullerton and SS Janice Voss which were launched in January and July of this year. It appeared that NASA had yet another success on its hands, following the Dragon spacecraft’s numerous flights to the orbiting outpost. Dragon, produced by Space Exploration Technologies or “SpaceX,” is the other spacecraft providing cargo delivery services under the CRS contract.

Prior to Wednesday’s mishap, NASA had been in negotiations with both Orbital and SpaceX to provide more flights under the first CRS contract. This would have seen additional cargo runs conducted through 2017. The timing of this accident – could not have been worse as NASA has announced it will accept proposals for the second CRS contract at the middle of this month (Nov. 2014). As such contractors other than SpaceX and Orbital will be able to compete for the second CRS contract. One of the Aerojet Rocketdyne’s AJ 26 engine’s that was used in the Oct. 28, 2014 flight. Photo Credit: Elliot Severn / SpaceFlight Insider

SpaceFlight Insider contacted both Orbital and NASA regarding Orbital’s status on the CRS contract – at the time of publication, Orbital has not responded.

Orbital Sciences Corporation is based out of Dulles, Virginia and has stated Antares is designed to ferry medium-class payloads to orbit. Although designed for an array of customers, Antares, at present, has only carried out missions under NASA’s Commercial Orbital Transportation Services and CRS contracts.

Orbital was formed in 1982 and produces small and medium class rockets for various customers including those in the private and public sectors as well as for the military via both ground and air-launched systems.

Unfortunately it has taken a very public launch failure to expose the folly of the bad business decision to use refurbished NK-33 engines for important missions. Rumor has it that the AJ-26 will be replaced with ANOTHER Russian engine – the RD-193 which belongs to the same family of engines as the RD-180 used on the Atlas V. Decades of bad policy by the US government coupled with a long string of corporate mergers that has hurt competition and innovation are apparently going to take a long time to reverse.

I read that the RD-193 generates about 200 tons of thrust & is a replacement for the NK-33 derived AJ-26 engine. I wonder how much modifications will OS have to do on the first stage before the first launch? Anyone have an estimate? It takes about 6 Merlin 1D engines to get to 882,000lbs of thrust. Seems like SpaceX should sell engines, too.

Really? their going to go from one piece of Russian junk to the next ?

@Jesse: One piece of that “Russian junk” powered the Atlas V for 50 consecutive successful flights now. Might think about that…

Probably what Jesse is trying to say is; We (Americans) should be developing and using our own motors. Not just for National pride, but we should be employing our people and not funding the Russians with our tax dollars and keeping them employed when we have so many skilled aerospace workers out of work.