Antares accident: Could decades old, Russian-made AJ-26 be to blame? 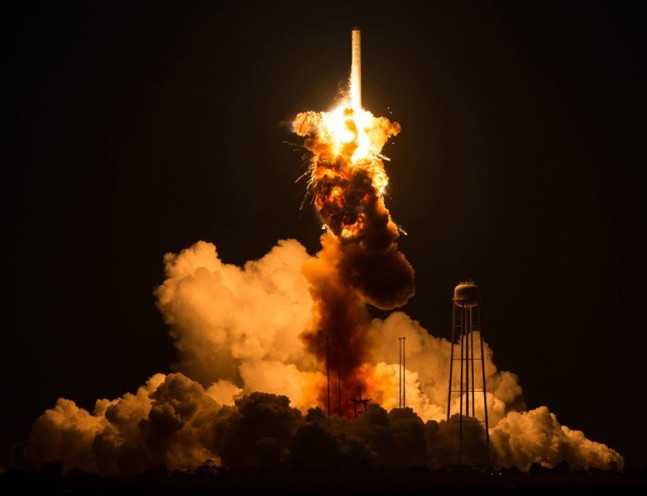 As has been widely reported, Orbital Sciences Corporation’s (Orbital’s) Orb-3 Antares rocket failed, on Oct. 28, a few seconds after liftoff. The rocket appeared to explode and then fall back onto Pad-0A at NASA’s Wallops Flight Facility in Virginia, destroying the rocket and its 5,000 lbs (2,268 kg) of cargo — intended for resupply of the International Space Station (ISS) under a $1.9 billion Commercial Resupply Services contract. As to what could have caused the failure, Orbital has just begun its investigation. However, one potential explanation has already been suggested.

Many experts within the industry have speculated that the rocket’s Aerojet Rocketdyne (Rocketdyne) AJ-26 engines will prove to be the root of the cause. Two of these engines power the first stage of the rocket. The AJ-26 began its life more than 40 years ago as an NK-33 engine — manufactured by the Kuztensov Design Bureau in the former Soviet Union. The engine was intended as a replacement for the NK-15 engine on the failed Soviet N-1 Moon rocket (all four launch attempts, between 1969 and 1972, ended in failure). However, the program to land cosmonauts on the Moon was canceled before the NK-33’s could be used, and the engines sat in a warehouse for more than 20 years.

Rocketdyne discovered and purchased approximately 40 of the NK-33’s in the mid-1990’s.

After refurbishment and upgrades (including the installation of advanced electronics and a gimbaling / steering capability), the engine was re-christened “AJ-26,” and Orbital, the Dulles, Virginia-based company, purchased 20 for use on Antares.

The AJ-26 has a less than stellar testing history and has suffered at least two recent failures.

In June 2011, an AJ-26 caught fire, and failed, in the E-1 Test Stand at NASA’s Stennis Space Center (SSC) in south Mississippi. The 2011 failure was determined to be caused by a fuel leak resulting from “stress corrosion cracking of the 40-year old metal.” More recently, on May 22 of this year, another AJ-26 failed, in the same E-1 Test Stand, approximately 30 seconds into a scheduled 54 second test.

Last month, Spaceflight Insider had the opportunity to speak to Rocketdyne’s SSC General Manager, Mike McDaniel, regarding the May 22 failure. McDaniel was reluctant to classify the engine failure as an “explosion.” However, he did confirm that the engine “disintegrated” in “one frame” of the video (as yet unreleased) taken of the test. The accident should not impact operations on the ISS, as the station has enough supplies to last through March 2015. Photo Credit: JD Taylor / SpaceFlight Insider

When asked if the May 22 failure was due to a Soviet-era problem, as opposed to a problem resulting from “Rocketdyne modifications,” McDaniel responded in the affirmative. No other explanation of the failure has been released by Rocketdyne or Orbital.

In light of the test failures, Orbital recently announced, on Sept. 30, that it intended to replace the AJ-26. However, no specific replacement was announced, and it was expected that the replacement would not take place for at least two years.

On Wednesday, Orbital’s Chairman, President and CEO, David Thompson, stated that “…[i]t is possible that we may decide to accelerate this change if the AJ-26 turns out to be implicated in the failure. But this has not yet been decided . . . . We are currently looking at the prospects for accelerating the introduction of that system and I do not at this point have a firm estimate for how much of that two-year period could be compressed. I certainly think we can shorten that interval but at this point I don’t know by how much.”

Thompson went on to confirm that there are “adequate AJ-26 engines in inventory, which subject to the ground testing and flight worthiness determinations, would fulfill all of our commitments under the current [CRS Phase 1] contract.” It is not yet known when Pad-0A will reopen, or when the Antares booster will fly again. Photo Credit: JD Taylor / SpaceFlight Insider

Stay tuned to SpaceFlight Insider for updates on the investigation into the Antares launch failure.

Adequate AJ26 engines (adequeate does not cut it in rocket business) bring your ear plugs and run for cover. A joke with 2 punch lines