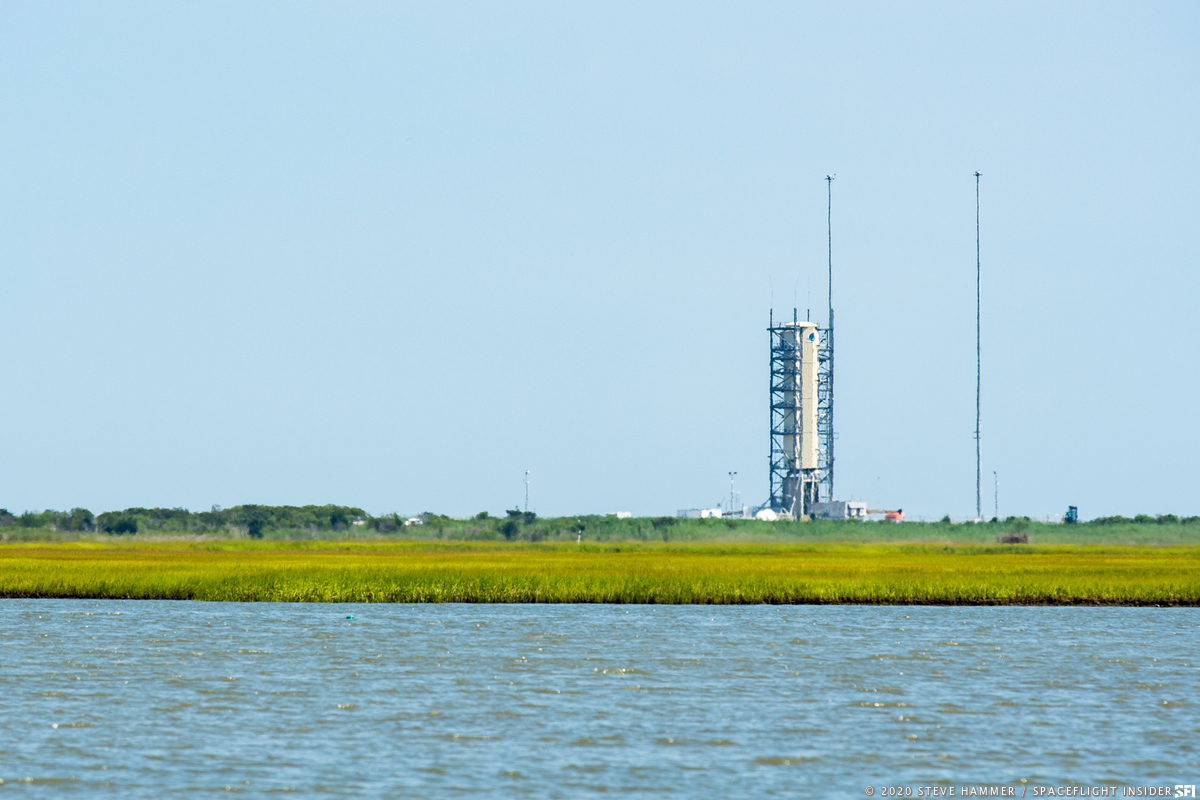 Teams from Northrop Grumman, the National Reconnaissance Office (NRO) and the Mid-Atlantic Spaceport (MARS) are all reporting as being poised and ready to launch the NROL-129 mission tomorrow, July 15, 2020, atop a Minotaur IV rocket. Even the weather appears to be supportive, with the latest forecast indicating only a 10% chance of violating acceptable launch weather constraints, with the limited concern lying with a risk of low clouds.

Due to the secure nature of the NRO mission, payload and flight path, Northrop Grumman staff were unable to advise on the exact length of tomorrow’s launch window, but it has been confirmed to open for a launch from Wallops Island Launch Pad 0B at 9:00 am Eastern Daylight Time. If for any reason the launch does not occur as planned on July 15, a backup window has been secured with the range for the same timings on July 16. 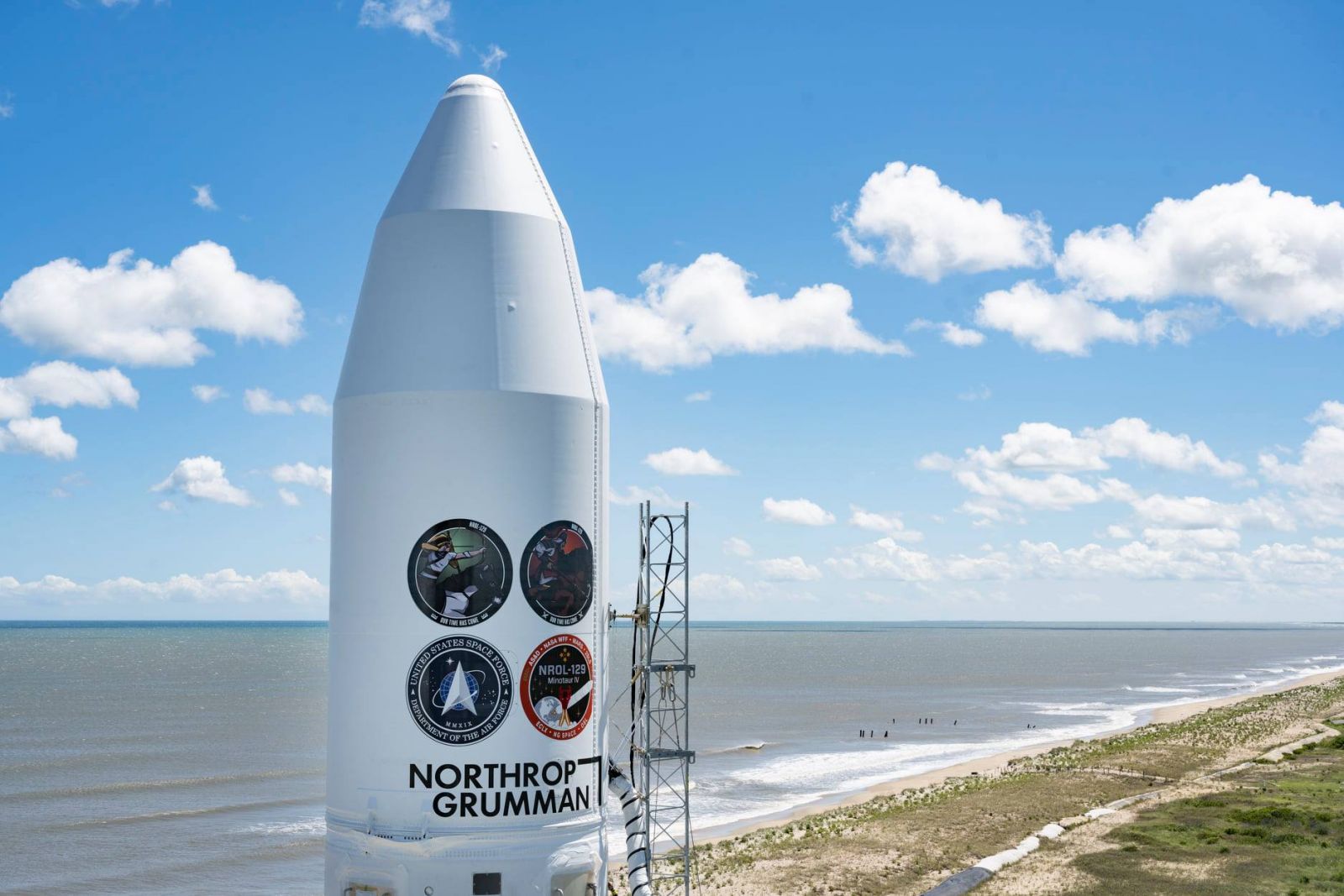 The classified payload for NROL-129 was the first mission to be flowed through the new payload processing facility at Wallops Island. Photo: NRO

During an exclusive pre-launch interview with Northrop Grumman’s Kurt Eberly, Director, Small and Medium Space Launch, SpaceFlight Insider learned that tomorrow’s mission will be the first to fly after having been flowed through a brand-new payload processing facility on Wallops Island, VA. “It’s a really great facility, right here on Wallops Island. It has several high bays, has a clean room, has fueling capability, has classified processing capabilities – [Virginia Space] has really brought a lot of new capability to the Wallops range, by collaborating with the NRO and developing this new payload processing facility.”

The NROL-129 Minotaur is also the first 100% NRO-dedicated mission to fly from Wallops Island, following a mixed-customer launch of Cygnus NG-12 last fall, which included the release of NRO CubeSats following launch aboard an Antares rocket.

Eberly, who has been working professionally to support rocket launches since 1991, also provided some detail about the background of the vehicle which will carry tomorrow’s payload to orbit – the venerable Minotaur IV. The Minotaur family of rockets make use of surplus rocket motors which were retired from prior military programs as a result of various treaties and changes in the defense landscape. In the case of NROL-129’s Minotaur IV, the first three (of four) stages are former Peacekeeper missile system components, which would have been cast and cured in Utah between 1988 and 1990; the fourth stage is powered by an Orion 38 (38-inch diameter) motor.

When asked about what it took to proceed toward tomorrow’s launch in the era of the 2020 novel coronavirus / COVID-19 pandemic, Eberly shared that workplace innovation and a strong commitment to the health and safety of all personnel were the cornerstones for success. “Northrop Grumman puts the health and safety of our workforce in front of everything else, including the health and safety of the partners that we work with – our spaceport partners, the NASA host range and of course our customer”. Expanding on the strategic methods employed, he continued “First, we performed a review of all of our operations – folks who could contribute from home, are at home. For those people who are required onsite, everyone needs to stay six feet away from each other, and everyone needs to be wearing a mask and other appropriate PPE.” 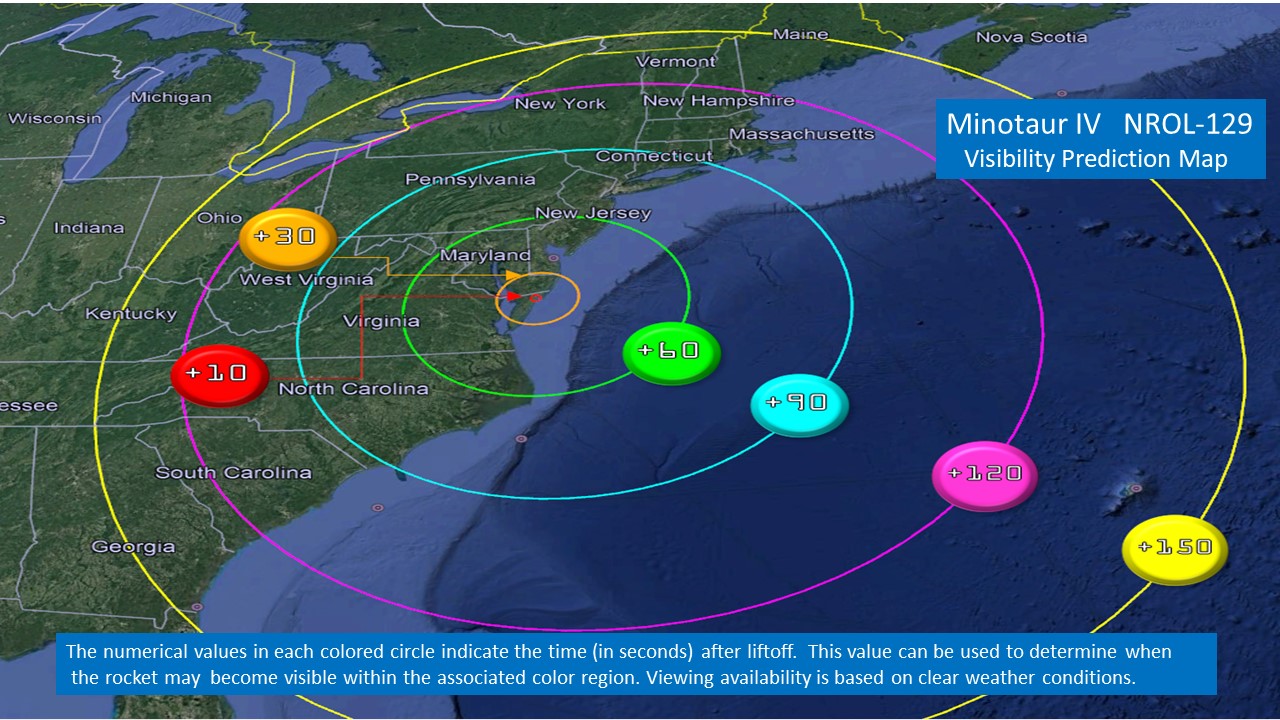 This launch visibility map shows the approximate locations where people on the Atlantic seaboard might catch a glimpse of the NROL-129 rocket in flight. Rings are listed by seconds after liftoff, in good seeing conditions. Credit: NASA

Acknowledging that there would invariably be operations which required people to be closer than six feet, Eberly described their innovative approach to the challenge: “We created a senior review board, a panel of three folks who review any proposed close distance operations. At first, they challenge the staff to make sure that it really is required, that they be close together. We have found in numerous instances that if [the teams] just think about it more creatively, they come up with a way to do it while maintaining distance.”

Once the countdown picks up, and even following liftoff, launch teams will be monitoring the flight’s telemetry as usual, but also from a safe distance. “In collaboration with the Wallops range, we’ve skipped every other console position in the control rooms and we’ve occupied an additional control room that wouldn’t normally be used. We also have stood up an engineering backroom at our base of operations in Chandler, Arizona. It’s going to have live telemetry and com links to the nets out here in Wallops, allowing us to keep some folks back in Chandler who would normally have traveled to the launch site.”

Summarizing the situation before returning to the work of the day prior to a launch, Eberly concluded: “The rocket’s ready, the spacecrafts are ready. We had the launch readiness review on Monday and all parties brought their status and reported readiness to proceed. Credit to the teams for being able to stay on track and keep the schedule.”

Watch SpaceFlight Insider for updates on the NROL-129 launch, flight and mission, as well as for additional reports on the topic of Northrop Grumman’s updated avionics within the Minotaur design.