What’s in a name? Possible NASA naming contest for SLS nothing new 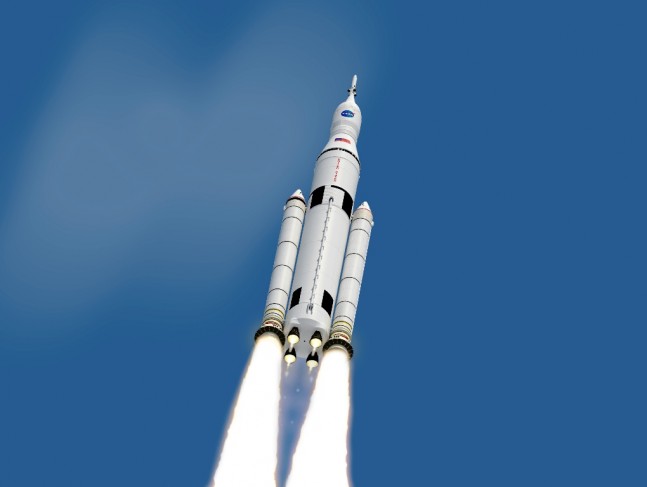 A report on SpaceFlight Now has detailed possible plans to host a naming competition for NASA's new super heavy-lift Space Launch System. If so, this effort will be the latest chapter in a narrative that spans the course of the space agency's long history. Image Credit: NASA

According to a report appearing on Spaceflight Now, NASA’s Space Launch System (SLS ) may receive a new name in the near future, and it would be chosen by young students. Having the names of spacecraft, robots, and rockets selected by members of the public is nothing new and, as recent events have shown, does not always go as planned.

The report states that lawmakers have written a bill that would “order NASA to rename the heavy-lift rocket through a competition among schoolchildren” and that, if passed into law, “the bill would set policy for NASA and includes budget guidelines that would shuffle funding from the agency’s Earth science programs into other areas, primarily the Space Launch System, Orion crew capsule and robotic exploration of the solar system.”

Language in the the NASA Authorization Act for 2016 and 2017 would, according to Spaceflight Now, “direct NASA to ‘conduct a well-publicized competition among students in elementary and secondary schools to name the elements of the administration’s exploration program.'” The same language was “included in a previous version of an authorization bill […] and NASA officials have had internal discussions of renaming the Space Launch System,” the articles adds.

Naming contests by NASA are nothing new. In recent years alone, NASA has put out a call for help naming an asteroid, a robot for the International Space Station (ISS), the craters of Mercury, and the features of Pluto. These requests provide publicity for the space agency and its operations, and can help raise public interest about space flight efforts overall. Before the Internet was so ubiquitous, such contests still existed, though entries were sent through organizations such as the U.S. Postal Service. One of NASA’s more notable naming competitions was the one conducted for the replacement shuttle for Challenger. Schoolchildren selected – Endeavour. Photo Credit: Carleton Bailie / SpaceFlight Insider

One of the more notable examples of naming contests conducted in the past three decades was the one held for Space Shuttle Endeavour, which was named through a contest that was announced in 1988 and completed in 1989, making it the only space shuttle to be named by children. The requirements were that students choose, as reported in LiveScience, “[A] name based on an exploratory or research sea vessel that had previously sailed. [One that was] appropriate for a spacecraft [and would] capture the spirit of America’s mission in space. [Also, NASA] wanted a name that would be easy to pronounce clearly over radio transmissions.” Many students separately suggested the name Endeavour, after the ship that the British explorer and scientist James Cook used in the mid-1700s to observe and record the transit of Venus across the Sun.

A few years later, the Mars rover called Sojourner was named in similar fashion, through “a year-long, worldwide competition in which students up to 18 years old were invited to select a heroine and submit an essay about her historical accomplishments,” according to a page on NASA’s website. That contest was announced in 1995 in the National Science Teachers Association’s magazine called Science and Children, and 12-year-old Valerie Ambroise’s entry – suggesting abolitionist Sojourner Truth – had won. Several years later, the Spirit and Opportunity rovers were named together by nine-year-old Sofi Collis, originally from Siberia, through one of NASA’s calls for names.

The theme of a young girl selecting the name of a Mars-bound robotic geologist would not end there, however.

The Mars Science Laboratory rover Curiosity’s moniker was suggested by sixth-grader Clara Ma and selected by a NASA panel “following a nationwide student contest that attracted more than 9,000 proposals via the Internet and mail. The panel primarily took into account the quality of submitted essays. Name suggestions from the Mars Science Laboratory project leaders and a non-binding public poll also were considered,” according to a report by the agency. Naming in accordance with the court of public opinion does not always go so smoothly.

The Tranquility node of the ISS was supposed to be named via online voting and suggestions in 2009, and the names did pour in.

“The public did a fantastic job and surprised us with the quality and volume of the suggestions,” said Bill Gerstenmaier, the agency’s associate administrator for Human Exploration and Operations, in a NASA report.

But “Colbert”, as in Stephen Colbert of Comedy Central’s Colbert Report, won the most votes (beating out the next highest entrant, “Serenity”, by more than 40,000 votes). This was unacceptable for NASA, who named the node “Tranquility” instead.

“Apollo 11 landed on the moon at the Sea of Tranquility 40 years ago this July. We selected ‘Tranquility’ because it ties it to exploration and the moon, and symbolizes the spirit of international cooperation embodied by the space station,” Gerstenmaier added.

Many within both the aerospace and public relations communities view the selection of “Tranquility” over “COLBERT” as a mistake by the Space Agency. The Colbert Report has a massive fan base, as was displayed by his name winning the contest. “It was a squandered PR coup for NASA,” said a NASA Public Affairs representative who requested to remain anonymous. “For the longest time the public has displayed virtually no interest in what NASA is doing and here they had an effort that saw an enormous amount of support and what did they do? They said, sorry, we don’t care what you think, we’re going to name it whatever we want. When NASA acts that way? They shouldn’t be surprised there’s so much apathy toward their efforts.”

Government-funded organizations are not the only ones to hold naming competitions for space hardware.

United Launch Alliance (ULA ) recently chose to christen its newest booster in the same way, using an Internet-based vote to choose the name of its Next Generation Launch System (NGLS). Initially, the names “Eagle”, “Freedom”, and “GalaxyOne” were provided as choices, with “Vulcan” and “Zeus” being added later in response to suggestions from the general public. The winning name, “Vulcan”, was announced at this year’s Space Symposium in Colorado. Shortly thereafter, there was one major objection.

Microsoft co-founder Paul Allen’s company, Vulcan Inc., unveiled Vulcan Aerospace on the same day and at the same symposium that the Vulcan rocket was announced, according to a report from Space.com. The subsidiary of Vulcan Inc., according to the paper presented on Vulcan Aerospace at the symposium, “has its heritage in SpaceShipOne and oversees the Stratolaunch Systems project,” and “collaborates across Vulcan Inc. for projects dealing with space.” The company claims ULA has infringed on its trademark with the new rocket’s name.

SpaceFlight Insider reached out to ULA to gain a better understanding regarding the situation, the Colorado-based firm responded as follows: “We have done our due diligence regarding the legal right to use the name Vulcan. ULA is committed to taking every reasonable step to avoid any confusion with other entities using this name and we are confident we can do so. Our use of the name is associated with the expendable launch vehicle that will serve as America’s Ride to Space for specific types of missions.”

NASA and its itinerant corporations and organizations will likely be holding naming competitions for some time to come. SLS is the booster that NASA representatives have stated will be used to send crews to a portion of an asteroid towed into lunar orbit and for the initial phases of a crewed mission to Mars. These flights are slated to occur in the mid 2020s and sometime in the 2030s, respectively.

If they were going to name a NASA rocket for Project Pluto, The name should be Hades because in greek mythology, pluto is an another name foe hades

@JACOB GOETZ And “pluto” because it will never get anything to any *planet*?

Much as I’d like to see SLS with a name, I don’t like the massive budget cut to the earth science program

Naming the SLS might turn out to be the worst decision since the IAU defined what a planet is and is not. I’ve heard many names for the SLS, but none which can be officially nominated.

the acronym was stagefright

Giving SLS a fancy new name won’t make the program worth the expense. Given the history of the space shuttle program, low flight rate and high fixed costs, I did not expect to see NASA developing yet another large launch vehicle with a (predictably) extremely low flight rate.

Given the success of Commercial Cargo, and the progress made so far on Commercial Crew, I’d like to see SLS replaced with Commercial Launch. Surely between ULA (Delta Heavy and later Vulcan and possibly a Vulcan Heavy) and SpaceX (Falcon Heavy, to test fly this year), NASA doesn’t need to spend billions every year maintaining the infrastructure and “standing army” for a launch vehicle they can’t afford to fly more than once or twice a year.

Nova was the name of the original Super Heavy Lift Vehicle proposed.

Given the history of LEO operations and their failure to accomplish anything except going in circles, I expect to see NASA develop an even larger follow-on vehicle with quad SRB’s. Call that Supernova.

Giving commercial cargo and crew another penny is a complete waste of tax dollars and the necessary step is for NASA to close shop on the ISS and LEO and go back to the Moon. By spending those billions on a 6 to 8 SLS launches a year a base on the Moon can finally create a permanent colony Beyond Earth Orbit.

I think it should be named “The Locus II” Locus is Latin for space, and the 2 represents the second stage of space exploration, as this shuttle will be used for the first deep space exploration (by man).

The Space Launch System needs a name to help rekindle the publics intrest in deep space exploration as well as to help kindle more of publics intrest in the SLS program. I think the Phoenix would be a great name for the SLS. The Eagle could also be a good name for SLS. I just hope to god it gets a name before it’s maden flight.

Old article but if anyone ever sees this: Arthur C Clarke in a version of 2001 described the Saturn and Neptune rockets that dominated 70s space exploration. You wouldn’t want your big phallic rocket being called Uranus so the next one out from Saturn is Neptune. I like it.